Offshore Wind: Half Empty or Half Full?

Apologies for that mild sarcasm. But even a quick look-back at OFW always raises the same familiar question: is the glass half empty or half full?

In a webinar in December New York’s NYSERDA – New York State Energy Research and Development Authority – provided an update and summary on the State’s 2019 offshore wind initiatives, including a brief look ahead for 2020. Beyond New York, NYSERDA is the lead agency in the Atlantic states offshore wind consortium. Unlike many state programs, NY has rich financial resources and it has developed specific programs to advance OFW work. As in most things, what New York does is important.

NY’s Empire and Sunrise projects, totaling 1700 MW, in the New York Bight, are supposed to start generating energy by 2024, less than four years. That’s a tough deadline. After 60 years, for example, it’s likely that highway engineers know just about every detail regarding an upcoming project. But that doesn’t mean they are easy. With OFW development, New York has less than 60 months to develop a brand new industry, in its entirety, from basic R&D to production to distribution.

• Pillar 2 will study the wind itself as a resource and develop a “Metocean Reference Site.”

Obviously, all important work. Again, it’s at the starting line. NYSERDA references an extensive committee structure to help with advice and priorities. But meetings have been sporadic and informal. What’s the 2020 work schedule to expedite this work? Don’t know.

Workforce is another critical – and political – emerging topic. For NY’s leadership, OFW is as much about employment and economic development as it is about energy. Sunrise and Empire developers, European companies, could, of course, probably bring in their own crews and get turbines set up pretty quickly. But that’s not what this is about.

It’s about jobs, including new opportunities to develop a diverse workforce and jobs for people from disadvantaged communities. All are worthy goals.  Electricians and welders from NY’s skilled trades could no doubt make a quick transition to Empire Wind, assuming the price is right. But if you’re parking cars at the Hilton, and you didn’t finish high school, that’s a tougher situation. Those future wind workers need to hit the books now.

New York has allocated $10 million for OFW training between 2018 and 2025. Two years are gone already. NY officials were asked for an update on the Jobs and Supply Chain Technical Working Group referenced in the December webinar, particularly about the status of the Offshore Wind Training Institute, which is funded at $20 million.

Like its R&D endeavors, NY’s workforce training ideas are in the formative stage. The OWTI is really a new program, announced by Gov. Cuomo in his 2020 State of the State address in which he writes that -

“To support New York’s growing offshore wind industry, Farmingdale and Stony Brook (Universities) will formally solicit partners for the $20 million Offshore Wind Training Institute, so that training can begin in 2021.”

Training is to start in 2021. Empire and Sunrise manufacturing and construction, though, are expected to start in 2022 or 2023; remember, generation is expected in 2024. How long does it take to become a trained – and maritime certified – OFW electrician, surveyor, assembler, welder, equipment operator or pilot? None of that is easy. Apprenticeships and on-the-job experience are likely necessary.

Importantly, Sunrise and Empire are just the first phase of NY’s extensive commitment to OFW, expected to reach 9,000 MW. In fact, one 2020 NYSERDA priority is receiving approval by the state’s public service commission to start work on the next phases.

Work force programs starting in 2021 would surely align with those upcoming, next-phase timelines. But New Yorkers are expecting payoffs from Phase I. Taken together, NYSERDA writes that Sunrise and Empire “will support more than 1,600 high-quality, well-paying careers backed by a prevailing wage and project labor agreements.” That’s a lot of ground to cover in four years. 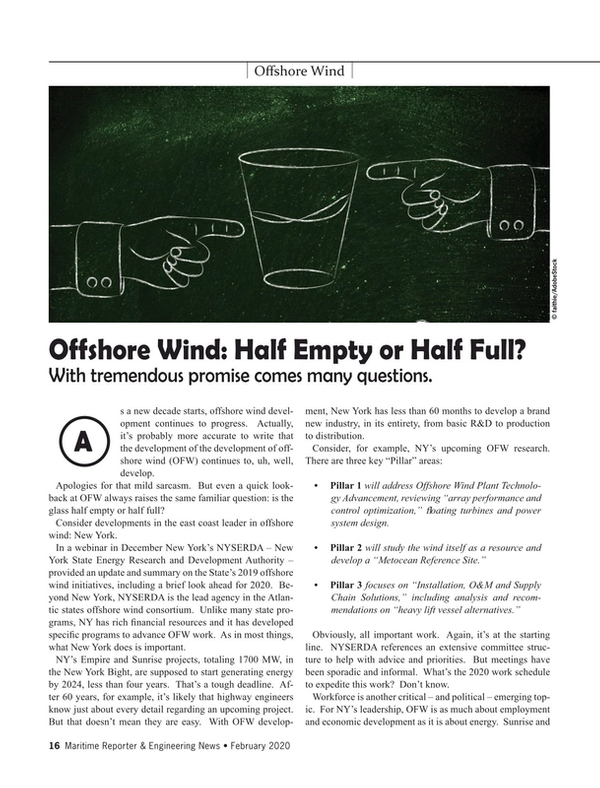 Read Offshore Wind: Half Empty or Half Full? in Pdf, Flash or Html5 edition of February 2020 Maritime Reporter

Other stories from February 2020 issue