Inside Ishin, the LNG-Fueled Tugboat

In May 2017, MOL decided to build an LNG-fueled tugboat that would be operated by Nihon Tug-Boat Co., Ltd. It was built by Kanagawa Dockyard Co., Ltd., has dual-fueled engines from Yanmar Co., Ltd., and runs on LNG supplied by Osaka Gas Co., Ltd. The LNG-fueled tugboat, called Ishin, was delivered in February of 2019, and was featured in the December 2019 edition of Maritime Reporter & Engineering News as a Great Ships of 2019.

Ishin is Japan’s first tugboat built to conform to the International Code of Safety for Ships Using Gases or Other Low-flashpoint Fuels (IGF Code). MOL conducted a demonstration test to supply LNG to the LNG-fueled tugboat Ishin in the port of Kobe and Nagoya. The test confirmed that LNG can be safely supplied to vessels at the port.

Inside Ishin
The tugboat’s role is to support large-size vessels in port, as well as escorting large vessels plying Osaka-Bay and the Setonaikai Inland Sea. So the Ishin not only has to deliver optimum performance in port, but also high-speed operation for those escort duties. It has a top speed of 16 knots, a fast tugboat and something of a rarity in its class. Generally, ship maneuverability and high-speed sailing tend to contradict each other, but this ship reconciles both needs. This is one of the Ishin’s major characteristics. In addition, many tugboats today  are equipped with an azimuth thruster, which allows the propeller to rotate 360° around the vertical axis. The Ishin is equipped with two of these propellers, each of which is driven directly by an engine. The Ishin can be freely moved forward and backward, port and starboard by changing the engine rpm and the direction of the 360° rotating propellers. By making full use of this feature, the Ishin can more effectively assist large-size vessels in berthing and un-berthing.

LNG Bunkering System
The most obvious feature of the Ishin is the arrangement of the LNG fuel tank, which is positioned on the rear deck and is a removable structure. Normally, the tank is not removed, but it can be, for example, when the Ishin is docked for regular maintenance. To achieve this configuration, the LNG fuel-gas supply system is integrated with the tank to make a very compact structure. As a result, the risk of a liquid spill is significantly reduced because the design minimizes the area where onboard leaks might occur during operation. In addition, the piping from intake port to tank is shortened to minimize the effect of heat load on the piping when bunkering the vessel from an external source.

The LNG fuel tank has a vacuum-insulated, double-hull structure, kind of like a large thermos bottle. It can maintain the temperature inside the tank longer than general ocean-going LNG carriers, because the heat load is small and pressure can be contained inside the tank. 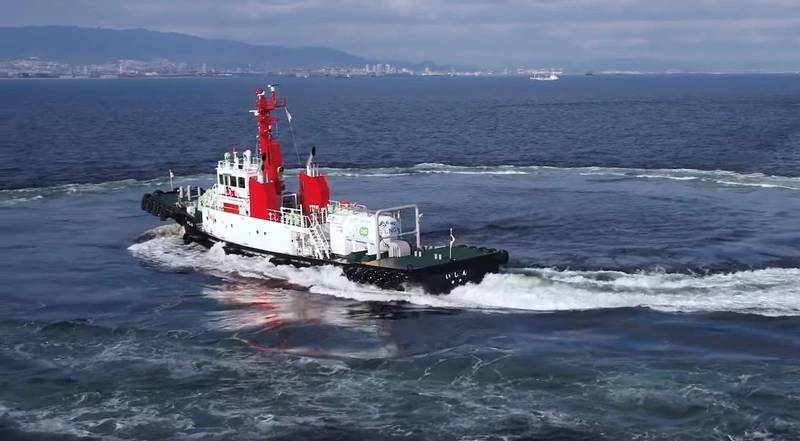 Dual-Fuel Engines
The Ishin adopts dual-fueled engines, which can run on both LNG and heavy oil. These engines use heavy oil A as a backup to LNG fuel, and can be operated in both Gas Mode (running on LNG) and Diesel Mode (running on heavy oil A). LNG is gasified using exhaust heat from the engine, and supplied to the engine. The gas is mixed with air and ignited with an extremely small amount of heavy oil A to create the explosion that produces power in the cylinders. 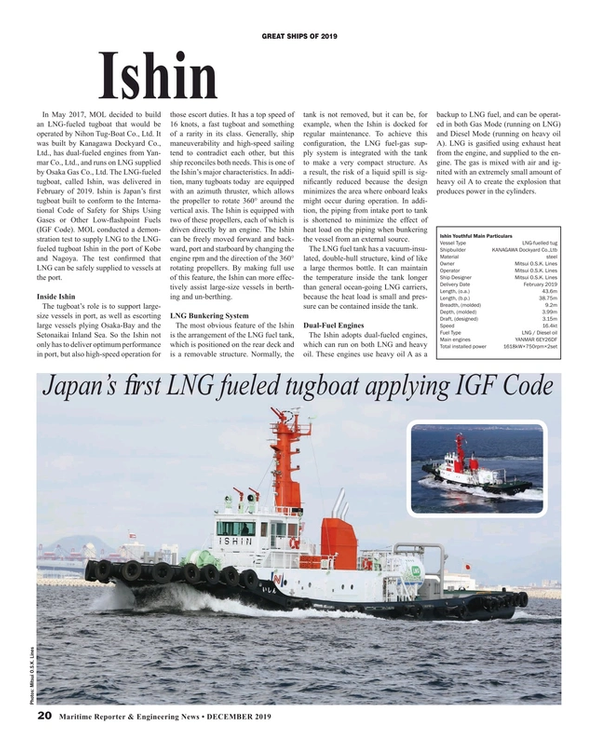 Read Inside Ishin, the LNG-Fueled Tugboat in Pdf, Flash or Html5 edition of December 2019 Maritime Reporter