Lessons learned on designing, building & operating with methanol as fuel.

Generally averse to technological risk, maritime professionals lean on lessons learned, when available, to make future decisions. According to Fredrik Stübner, Director Ship Management, Marinvest, his organization’s experience running ships on methanol can be instructive for others considering emission reductions technologies, and to this end he suggests:

1. VESSEL DESIGN
“For other shipowners considering methanol as fuel, the differences between a standard vessel design and a methanol dual-fuel design are minimal and revolve around the engine and fuel supply system.  One consideration is the calorific value of the methanol itself, which is about half the energy value of diesel, so you need twice as much fuel. Depending on the sailing range, fuel storage capacity is a consideration, however, it is simple to convert ballast tanks to fuel storage”

2. VESSEL CONSTRUCTION
“Go to an established, experienced shipyard and bring on board the right site management team. We have a great cooperation with Hyundai MIPO in Ulsan, Korea. They have experience with the two series that we’ve already built and are a world-leading shipbuilder.”

3. VESSEL MAINTENANCE
“As a low flashpoint liquid fuel, there are additional safety features needed. For instance, all the methanol fuel piping in the engine room is double walled, and the outer wall piping needs to be ventilated. The bottom line is the engine is a standard two-stroke engine, and the methanol fuel system is an add-on. With the flex-fuel engines, changing between the fuels is seamless and automatic.” He did note that the second generation ships and engines have evolved to be even more cost effective. Running on methanol requires a small amount of pilot fuel for ignition. On the first generation engines the amount was less than five percent, while the second generation engines require under 3.5 percent. 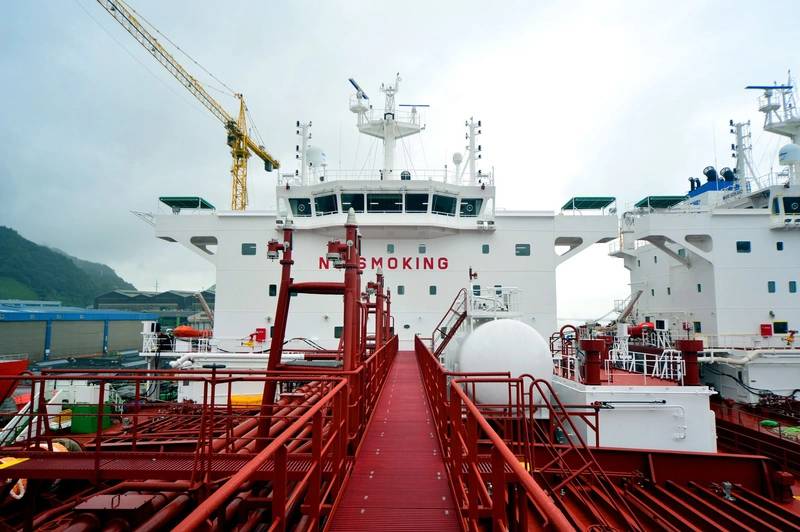 Photo: Methanex Corporation4. ADDITIONAL TRAINING
“When we started this, we were in new territory. We’re still running on the draft IMO guidelines for low-flashpoint liquid fuels, which we are assisting the classification societies and the flag states to implement. The chief engineer and others participate in special electrical engine and liquid fuel methanol training at The MAN PrimeServ Academy in Copenhagen. Since the IGF code came into play and the entire crew undertakes in-depth training for bunkering and fire safety procedures for low flash point liquid fuels.”

According to Hexter, the methanol fuel technology “has been reliable and has led to refinement of the improved second-generation of MAN methanol duel-fuel engines – the test results have returned better fuel efficiency when running on methanol compared to HFO/MGO.”
“When we launched the first dual-fueled vessels there were minor teething issues but none that prevented the vessels from operating and these learnings evolved into a better solution,” said Hexter. “Well-designed failsafe mechanisms, including automatic failover between fuel types, also increases the reliability of the overall system.”

“Through those first 60,000 hours the engines and technology are proven to work, and the performance and safety aspects have been excellent. We’re achieving better fuel efficiency, and we’ve had no loss-of-power incidents due to the technology. With our partners at MAN, it’s encouraging to see that they continue to work towards improving the efficiency of the system.” 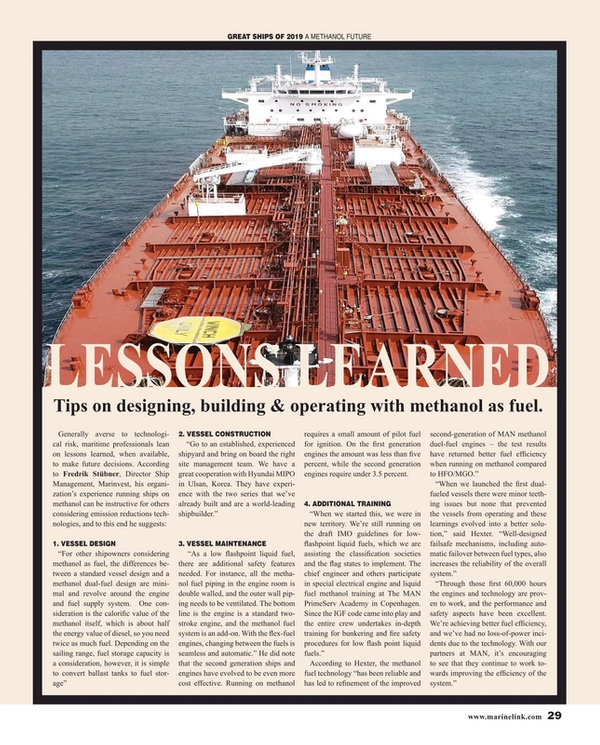