Read this page in Pdf, Flash or Html5 edition of May 2019 Maritime Reporter Magazine 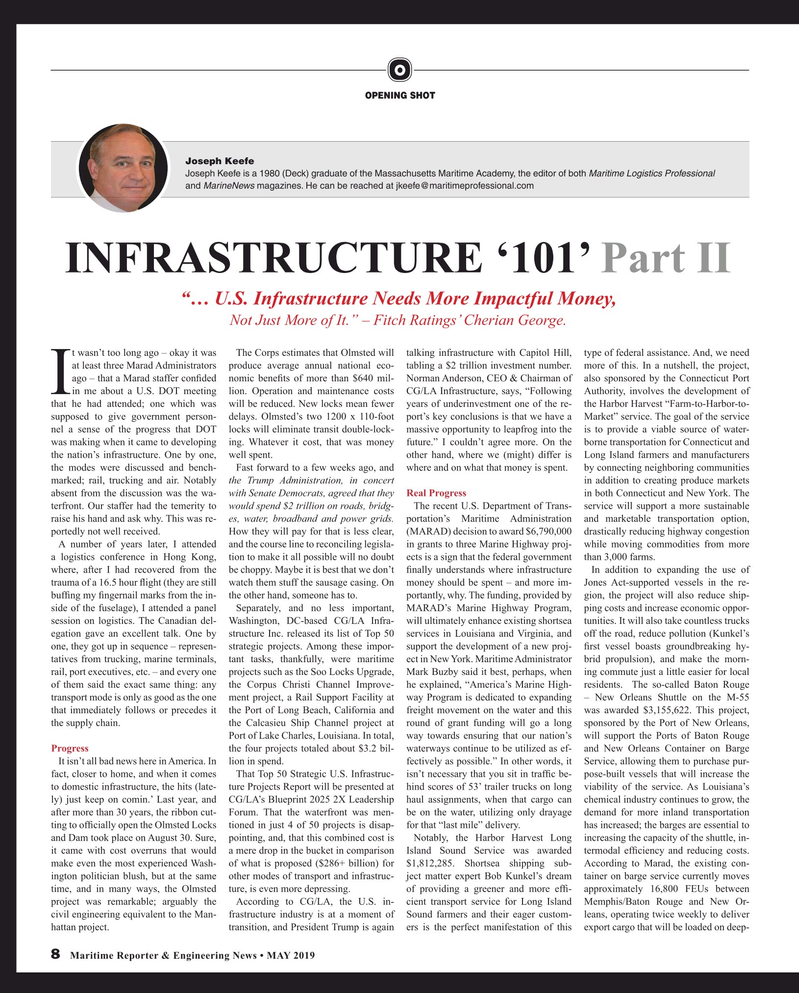 Joseph Keefe is a 1980 (Deck) graduate of the Massachusetts Maritime Academy, the editor of both Maritime Logistics Professional and MarineNews magazines. He can be reached at jkeefe@maritimeprofessional.com

Not Just More of It.” – Fitch Ratings’ Cherian George.

t wasn’t too long ago – okay it was The Corps estimates that Olmsted will talking infrastructure with Capitol Hill, type of federal assistance. And, we need at least three Marad Administrators produce average annual national eco- tabling a $2 trillion investment number. more of this. In a nutshell, the project, ago – that a Marad staffer con? ded nomic bene? ts of more than $640 mil- Norman Anderson, CEO & Chairman of also sponsored by the Connecticut Port

Iin me about a U.S. DOT meeting lion. Operation and maintenance costs CG/LA Infrastructure, says, “Following Authority, involves the development of that he had attended; one which was will be reduced. New locks mean fewer years of underinvestment one of the re- the Harbor Harvest “Farm-to-Harbor-to- supposed to give government person- delays. Olmsted’s two 1200 x 110-foot port’s key conclusions is that we have a Market” service. The goal of the service nel a sense of the progress that DOT locks will eliminate transit double-lock- massive opportunity to leapfrog into the is to provide a viable source of water- was making when it came to developing ing. Whatever it cost, that was money future.” I couldn’t agree more. On the borne transportation for Connecticut and the nation’s infrastructure. One by one, well spent. other hand, where we (might) differ is Long Island farmers and manufacturers the modes were discussed and bench- Fast forward to a few weeks ago, and where and on what that money is spent. by connecting neighboring communities marked; rail, trucking and air. Notably the Trump Administration, in concert in addition to creating produce markets absent from the discussion was the wa- with Senate Democrats, agreed that they Real Progress in both Connecticut and New York. The terfront. Our staffer had the temerity to would spend $2 trillion on roads, bridg- The recent U.S. Department of Trans- service will support a more sustainable raise his hand and ask why. This was re- es, water, broadband and power grids. portation’s Maritime Administration and marketable transportation option, portedly not well received. How they will pay for that is less clear, (MARAD) decision to award $6,790,000 drastically reducing highway congestion

A number of years later, I attended and the course line to reconciling legisla- in grants to three Marine Highway proj- while moving commodities from more a logistics conference in Hong Kong, tion to make it all possible will no doubt ects is a sign that the federal government than 3,000 farms.

where, after I had recovered from the be choppy. Maybe it is best that we don’t ? nally understands where infrastructure In addition to expanding the use of trauma of a 16.5 hour ? ight (they are still watch them stuff the sausage casing. On money should be spent – and more im- Jones Act-supported vessels in the re- buf? ng my ? ngernail marks from the in- the other hand, someone has to. portantly, why. The funding, provided by gion, the project will also reduce ship- side of the fuselage), I attended a panel Separately, and no less important, MARAD’s Marine Highway Program, ping costs and increase economic oppor- session on logistics. The Canadian del- Washington, DC-based CG/LA Infra- will ultimately enhance existing shortsea tunities. It will also take countless trucks egation gave an excellent talk. One by structure Inc. released its list of Top 50 services in Louisiana and Virginia, and off the road, reduce pollution (Kunkel’s one, they got up in sequence – represen- strategic projects. Among these impor- support the development of a new proj- ? rst vessel boasts groundbreaking hy- tatives from trucking, marine terminals, tant tasks, thankfully, were maritime ect in New York. Maritime Administrator brid propulsion), and make the morn- rail, port executives, etc. – and every one projects such as the Soo Locks Upgrade, Mark Buzby said it best, perhaps, when ing commute just a little easier for local of them said the exact same thing: any the Corpus Christi Channel Improve- he explained, “America’s Marine High- residents. The so-called Baton Rouge transport mode is only as good as the one ment project, a Rail Support Facility at way Program is dedicated to expanding – New Orleans Shuttle on the M-55 that immediately follows or precedes it the Port of Long Beach, California and freight movement on the water and this was awarded $3,155,622. This project, the supply chain. the Calcasieu Ship Channel project at round of grant funding will go a long sponsored by the Port of New Orleans,

Port of Lake Charles, Louisiana. In total, way towards ensuring that our nation’s will support the Ports of Baton Rouge

Progress the four projects totaled about $3.2 bil- waterways continue to be utilized as ef- and New Orleans Container on Barge

It isn’t all bad news here in America. In lion in spend. fectively as possible.” In other words, it Service, allowing them to purchase pur- fact, closer to home, and when it comes That Top 50 Strategic U.S. Infrastruc- isn’t necessary that you sit in traf? c be- pose-built vessels that will increase the to domestic infrastructure, the hits (late- ture Projects Report will be presented at hind scores of 53’ trailer trucks on long viability of the service. As Louisiana’s ly) just keep on comin.’ Last year, and CG/LA’s Blueprint 2025 2X Leadership haul assignments, when that cargo can chemical industry continues to grow, the after more than 30 years, the ribbon cut- Forum. That the waterfront was men- be on the water, utilizing only drayage demand for more inland transportation ting to of? cially open the Olmsted Locks tioned in just 4 of 50 projects is disap- for that “last mile” delivery. has increased; the barges are essential to and Dam took place on August 30. Sure, pointing, and, that this combined cost is Notably, the Harbor Harvest Long increasing the capacity of the shuttle, in- it came with cost overruns that would a mere drop in the bucket in comparison Island Sound Service was awarded termodal ef? ciency and reducing costs. make even the most experienced Wash- of what is proposed ($286+ billion) for $1,812,285. Shortsea shipping sub- According to Marad, the existing con- ington politician blush, but at the same other modes of transport and infrastruc- ject matter expert Bob Kunkel’s dream tainer on barge service currently moves time, and in many ways, the Olmsted ture, is even more depressing. of providing a greener and more ef? - approximately 16,800 FEUs between project was remarkable; arguably the According to CG/LA, the U.S. in- cient transport service for Long Island Memphis/Baton Rouge and New Or- civil engineering equivalent to the Man- frastructure industry is at a moment of Sound farmers and their eager custom- leans, operating twice weekly to deliver hattan project. transition, and President Trump is again ers is the perfect manifestation of this export cargo that will be loaded on deep- 8 Maritime Reporter & Engineering News • MAY 2019