Vigor built on its ongoing investments in critical infrastructure in the Puget Sound in 2017 with the $20 million investment in another drydock. At 640 ft. long with a clear width of 116 ft., the new dock will be the third, and largest, at Vigor’s Harbor Island shipyard. The drydock is expected to be operational in early first quarter 2018 and is part of Vigor’s ongoing commitment to make Harbor Island a primary destination for ship repair and conversion on the West Coast for both commercial and government customers.

Major repair and conversion projects completed at Vigor’s Harbor Island facility in Seattle in 2017 include a mid-life extension and repower for R/V Thomas G. Thompson, the 274-ft. research vessel operated by the University of Washington. The $45 million project was funded by the U.S. Navy’s Office of Naval Research and the National Science Foundation and included a complete overhaul of the propulsion, navigation and core engineering systems as well as improvements to lab space and science upgrades. The vessel was delivered to the University of Washington in December.
The Vigor Seattle team has also been busy for the U.S. Coast Guard, performing structural enhancement drydock availability (SEDA) for National Security Cutters Bertholf and Waesche. Completion of the complex structural enhancements is designed to prevent long-term fatigue damage which would result in additional life cycle maintenance costs. The USS Frank Cable, a U.S. Navy submarine tender, underwent $56 million of improvements and maintenance, including more than 600,000 pounds of steel renewal at Vigor’s Portland, Ore. shipyard returning the near 40 year old ship to its designed mission capabilities.
In 2018, Vigor said it will be busy with a wide variety of commercial and government vessels of varying complexities. This includes re-powers and ship conversions, several cruise ships, fishing trawlers, dredges, tankers, containerships and many other vessel types.
(As published in the January 2018 edition of Maritime Reporter & Engineering News) 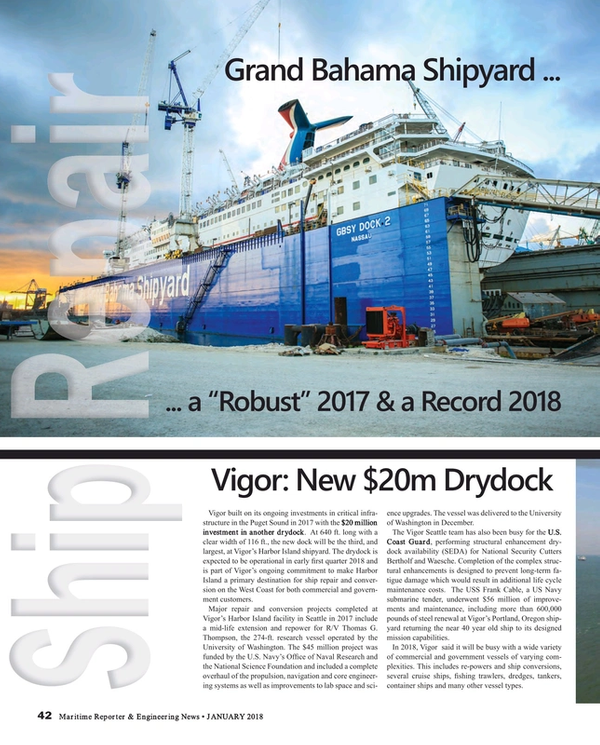 Other stories from January 2018 issue