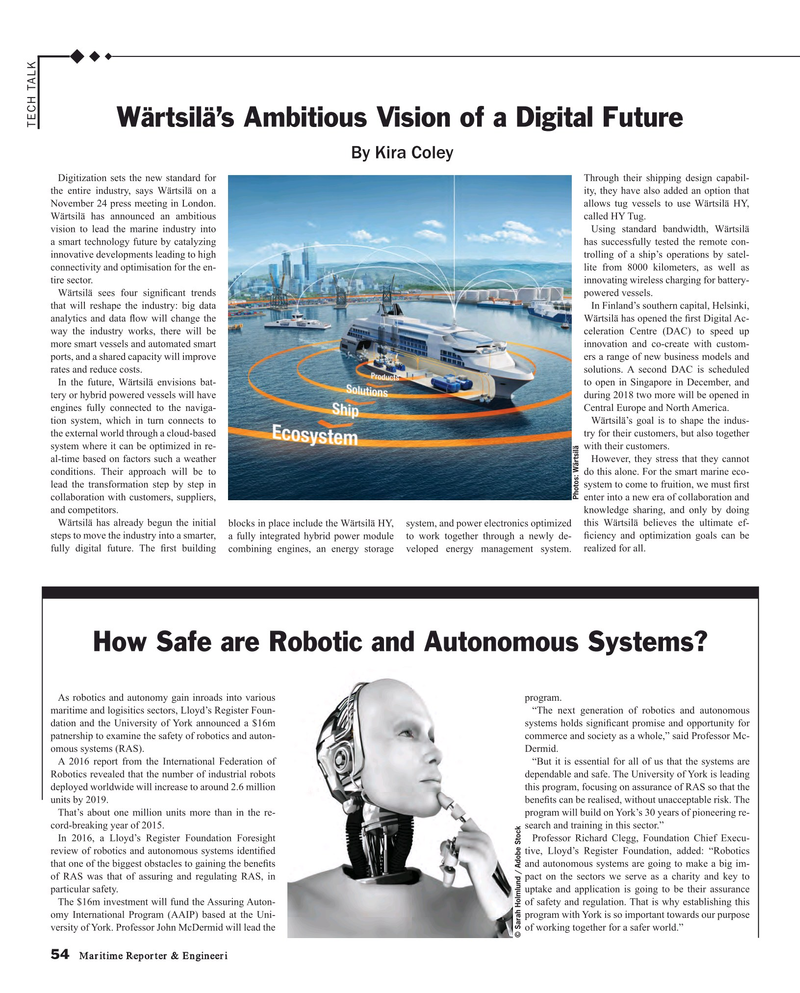 Digitization sets the new standard for Through their shipping design capabil- the entire industry, says Wärtsilä on a ity, they have also added an option that

Wärtsilä has announced an ambitious called HY Tug. vision to lead the marine industry into Using standard bandwidth, Wärtsilä a smart technology future by catalyzing has successfully tested the remote con- innovative developments leading to high trolling of a ship’s operations by satel- connectivity and optimisation for the en- lite from 8000 kilometers, as well as tire sector. innovating wireless charging for battery-

that will reshape the industry: big data In Finland’s southern capital, Helsinki, analytics and data ? ow will change the Wärtsilä has opened the ? rst Digital Ac- way the industry works, there will be celeration Centre (DAC) to speed up more smart vessels and automated smart innovation and co-create with custom- ports, and a shared capacity will improve ers a range of new business models and rates and reduce costs. solutions. A second DAC is scheduled

In the future, Wärtsilä envisions bat- to open in Singapore in December, and tery or hybrid powered vessels will have during 2018 two more will be opened in engines fully connected to the naviga- Central Europe and North America.

tion system, which in turn connects to Wärtsilä’s goal is to shape the indus- the external world through a cloud-based try for their customers, but also together system where it can be optimized in re- with their customers. al-time based on factors such a weather However, they stress that they cannot conditions. Their approach will be to do this alone. For the smart marine eco- lead the transformation step by step in system to come to fruition, we must ? rst

Photos: Wärtsilä collaboration with customers, suppliers, enter into a new era of collaboration and and competitors. knowledge sharing, and only by doing

Wärtsilä has already begun the initial blocks in place include the Wärtsilä HY, system, and power electronics optimized this Wärtsilä believes the ultimate ef- steps to move the industry into a smarter, a fully integrated hybrid power module to work together through a newly de- ? ciency and optimization goals can be fully digital future. The ? rst building combining engines, an energy storage veloped energy management system. realized for all.

How Safe are Robotic and Autonomous Systems?

As robotics and autonomy gain inroads into various program.

maritime and logisitics sectors, Lloyd’s Register Foun- “The next generation of robotics and autonomous dation and the University of York announced a $16m systems holds signi? cant promise and opportunity for patnership to examine the safety of robotics and auton- commerce and society as a whole,” said Professor Mc- omous systems (RAS). Dermid.

Robotics revealed that the number of industrial robots dependable and safe. The University of York is leading deployed worldwide will increase to around 2.6 million this program, focusing on assurance of RAS so that the units by 2019. bene? ts can be realised, without unacceptable risk. The

That’s about one million units more than in the re- program will build on York’s 30 years of pioneering re- cord-breaking year of 2015. search and training in this sector.”

In 2016, a Lloyd’s Register Foundation Foresight Professor Richard Clegg, Foundation Chief Execu- review of robotics and autonomous systems identi? ed tive, Lloyd’s Register Foundation, added: “Robotics that one of the biggest obstacles to gaining the bene? ts and autonomous systems are going to make a big im- of RAS was that of assuring and regulating RAS, in pact on the sectors we serve as a charity and key to particular safety. uptake and application is going to be their assurance

The $16m investment will fund the Assuring Auton- of safety and regulation. That is why establishing this omy International Program (AAIP) based at the Uni- program with York is so important towards our purpose versity of York. Professor John McDermid will lead the of working together for a safer world.” © Sarah Holmlund / Adobe Stock 54 Maritime Reporter & Engineering News • DECEMBER 2017