With three species of migrating cod to fish and new commercial species arriving as oceans warm, Norway is a fisheries Valhalla. Yet, recent boat sales suggest the Scandinavian country’s role is changing. Vessel orders and rules in Norway are propping up yards and designers on Europe’s fringes. Medium-sized hull orders for Romanian, Russian and Turkish boat builders are new, while large vessel orders for Denmark or Spain continue apace. Unconventional Icelandic designs, too, are gaining ground here as catches and profits soar.

Stirring the stream of new-builds are rules, anticipated rules and cross-border catch agreements. In Norway, authorities have dropped limits on a coastal vessel’s length in favor of regulating the size and type of its hold (tank design rules and DNV Class 1A1). The result has been owner interest in new ship designs and modifications amidships. Crucially, for now, rules allowing larger vessels to accumulate fisheries quotas look set to become true in 2016 for smaller vessels of 11 meters to 15 m length. The optional new regime creates a “free (coastal) fisherman” class who need not buy quotas. Those that do can also buy two “extra quotas” beyond the ones they’re allotted. These strictures and new catch agreements with the EU mean quotas are going unused in Norway, where catches have grown just as vessel numbers have fallen (from 6,500 in 2009 to 6,000 in 2014).

Change-Aware
“There’s certainly no crisis,” Norwegian Fisheries Directorate spokesman, Olav Lekve, says. Directorate numbers show margins are up 13 percent. “(Norwegian fishermen) sell to the whole world and there are many products that vary a lot in price.”

Wild salmon sell at “pretty high prices” in Europe. Lekve also points to the “very detailed regulation” that boat owners submit to. He says they’ve learned to take advantage of every change thrown at them: “Quotas, fishing areas, equipment, measures to protect young fish … They’ve been pretty positive about it all. They are used to being regulated.”

One of those changes affects vessels of 60 m and longer and appears to allow them to pursue coastal cod, the Barents Sea’s shoals and the under-pressure North Sea cod shared with EU fleets. In 2016, these large vessels will fill six quotas — three for pelagic (schooling species) and three for “bottom feeders” — and they’ll have “more freedom to choose the gear they use,” said Lekve.

Booming
Norwegian shipyard Kleven seems to be capitalizing on the new rules and limits. With Denmark’s quotas for most species rising after a recent Norway-EU round of negotiations (minus Iceland), Kleven will supply a 90 m SALT 0155 design for Danish Gitte Henning. Tolerances on equipment choice allow for a combined pelagic trawler and purse seiner 17.8 m wide. The newbuild will be the largest pelagic vessel in its segment, Kleven says.

The deal is the fourth fish-related new-build for Kleven’s Myklebust Verft since June and a suitable prize on its 100th birthday. Norwegian suppliers Brunvoll, Scana Volda, Hareid Elektriske, Karmøy Winch and MMC are in on a build due at year-end 2017. Kleven’s order book now stands at 16 vessels worth NOK10 billion.

Pretty Big
With 25 percent of a catch shared with Europe, large vessel order in Norway are sure to continue. The 74 m, Havyard-designed Smaragd for an owner of the same name attracted much attention for its cutting-edge equipment and ability at its baptism this fall. Its cargo hold, at 2100 cu. m., is 300 times the smallest vessels. The purse-seiner and pelagic trawler is built for the open Atlantic’s herring and mackerel and will pump these aboard from nets astern and amidships.

Pon Power delivered the main Caterpillar 4,000 kW engines and two auxiliary C32’s of 994 kW. Rolls-Royce delivered the propulsion and Finnøy Gir & Propeller the gears. Brunvoll supplied the tunnel thrusters and Norwegian Electric Systems the electric thruster motors. Rapp Marine, Adria Winch and Seaonics delivered the capstan and winches. For the crew of 16, Maritime Monitering put in the cabin furnishings. With the all-important winter season and fisheries talks in London underway, all four Smaragd captains were out at sea or occupied and could not be reached for comment.

Rise of Seacon
The 90-foot MS Stokke Senior being built for a similarly named owner is a combi-boat for coastal waters and part purse seiner, side hauler and trawler. The build at Yaroslav Shipyard in Russia will include Stadt-built diesel-electric and Heimdal propellers; Triplex cranes and SMV Hydraulic winches. This SC 90 — third of its type — will process pelagic and whitefish, cooled in tanks or kept live in wells.

Recent oversized catches of mackerel, herring and cod have topped what Lekve says has been 10 years of stable earnings. The savings are now being reinvested. Attracting that investment is Nordfjord’s Seacon and nearby Stadyard, builder of the Seacon SC 15 (emphasis on “15 m”), the yard’s 39th new-build and a combined purse- and side-seiner. A Polish yard will build the hull, with its 8 m beam, for Seacon’s 15th sale in Norway. Seacon says the new-build T.A. Senior will “replace” a 2001 version of the same name (now quayside and laden with fish).

Seacon’s SC34, at 34 m, is also hitting the mark with metal hulls and fittings pieced together in Russia, Romania and Turkey for customers in northern Norway. Build No. 10, the coastal seiner MS Breivik Junior for Breivik AS, will deliver in the fall of 2016 from VARD’s Romanian yard.

Fantastic Plastic
Norway has been good, mostly, for Icelandic builder and designer Seigla, deliverer of over 120 boats, 30 of them to Norway. Seigla’s vacuum formed plastic designs are selling. The traditional Norwegian and Icelandic sjark (say shark) has been made by Seigla into a high-speed (if desired) custom-build.

Two Seigur T1100-Liberty auto-liners will be delivered to Norwegian fleet owners in Bodo in 2016. Three sjarker are on order for coastal fishermen. “2015 was a fantastic year. 2014 was very good year,” says Dutch expat Sander Nieuwstad. “We are working now on 2017 and five large auto-liners for Norway and Iceland.”
Nieuwstad claims skippers have been calling the T1100 and related designs “catch machines” that use up every centimeter of space while providing overhead cover for the work of fishing.

Seigla celebrated 25 years this year by introducing the S XWL 1500 Liberty, “14.99 m and 6.5 m wide” and featuring six single cabins or — “to increase the size of the hold” — four cabins of two bunks. Cargo holds range from 70 m3 to 90 m3. Autoline systems of up to 40,000 hooks are handled by the Liberty’s Mustad Autoline system. In response to Class and the authorities, Seigla has adjusted the ballast and, it is understood, the keel.

One skipper reported in the Norwegian press had his first Seigla-made vessel catch fire at harbour. He said he had no qualms about ordering another.

“I called (Seigla) the same day (the vessel was destroyed) and ordered a new one,” owner Benn Joeren Jenssen was quoted as saying. 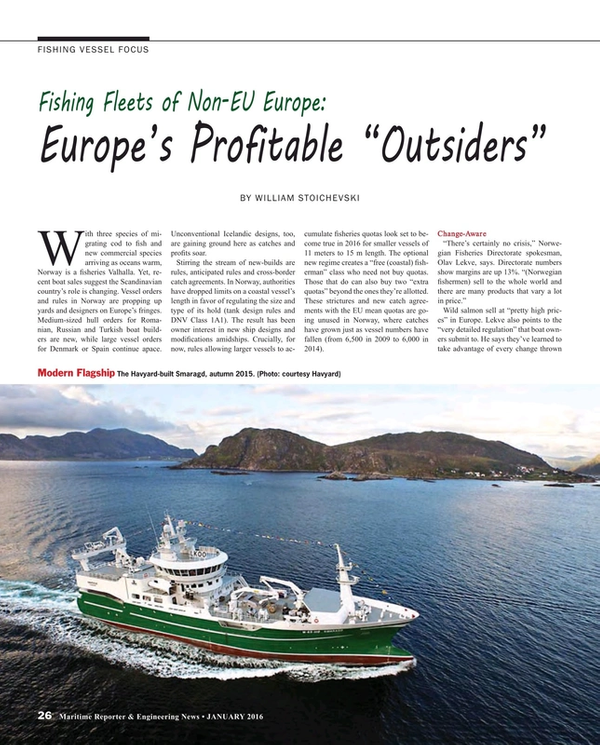