“For the first time, vessels without ECDIS now represent a minority of the internationally trading fleet. This is an important moment for the shipping industry, as it signals that we are moving out of the ECDIS adoption phase and into a new era.”

According to UKHO figures, large cargo ship fleet well prepared for July 2016 ECDIS regs
More than 50% of ships trading internationally are already living with ECDIS, according to the latest figures published by the United Kingdom Hydrographic Office (UKHO). Of an estimated 41,500 internationally trading ships around the world, 24,300 or 58% are now using an ENC (Electronic Navigational Chart) service on ECDIS as a result of the SOLAS-mandated carriage of ECDIS, which is being introduced on a rolling timetable for different ship types and sizes. Moreover, when those that do not trade internationally are included, 45% of all ships that are subject to the SOLAS regulations are ECDIS ready. On this basis of this trajectory for ECDIS adoption, the UKHO believes that the shipping industry is broadly on course to comply with the SOLAS-mandated timetable for ECDIS carriage across the global fleet by the end of this decade.

Tankers and Cargo Ships
The incorporation of ECDIS onboard the world’s fleet of ships is not specific to size or type, as adoption is being made by different categories of ship types and sizes. For example, the percentage of tankers greater than 3,000 gt that are ECDIS ready has risen from 54% in April 2015 to 69% in October 2015, following the ECDIS carriage regulations entering into force from July 1, 2015 for tankers. The SOLAS regulations on ECDIS carriage will be extended to all existing cargo ships greater than 50,000 gt from July 1, 2016. At present, 62% of the 3,500 large cargo ships that will be subject to these regulations are already ECDIS ready.
This is significantly higher than the equivalent figure for the tanker fleet from 12 months ago, indicating that the large cargo ship fleet is relatively more advanced in terms of its preparations for the ECDIS deadline. While the trend is generally positive, there certainly are some variations by ship-type regarding ECDIS readiness. For example, 57% of bulkers are living with ECDIS compared to RoRos (65%) and containerships (71%). When looking at the trend regionally, however, it is nearly a level playing field, with 63% of large cargo ships in Asia ECDIS ready, closely followed by 62% in Europe.
“These figures show that the majority of internationally trading ships have made the transition to digital navigation and are now living with ECDIS,” said Thomas Mellor, UKHO’s Head of OEM Technical Support and Digital Standards.
“For the first time, vessels without ECDIS now represent a minority of the internationally trading fleet. This is an important moment for the shipping industry, as it signals that we are moving out of the ECDIS adoption phase and into a new era.
“It’s important to understand that ECDIS compliance and effective ECDIS use are not the same thing. All shipping companies need to ensure that they have put in place revised bridge policies and procedures that reflect the requirements of safe, effective and compliant ECDIS operation, that ECDIS software is upgraded to comply with the latest IHO ENC Standards, and that its bridge teams are competent and confident in using ECDIS to its full potential.” 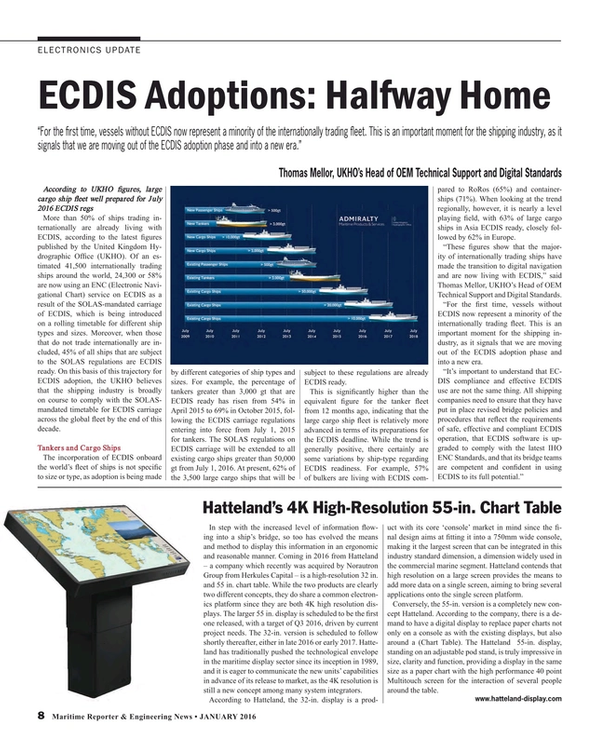