The Rise of Permanent Magnet Motors and Generators

Since the boom of the NdFeB magnets industry, the usage and potential applications for permanent magnet machines have grown exponentially to the detriment of traditional induction systems. In special applications like elevators, cranes, hybrid vehicles or renewable energy, permanent magnet machines have already become the preferred technology. In the marine sector, they are now starting to be the main competitor to mainstream solutions.

Permanent Magnet Materials for Electrical Motors
The development of permanent magnet materials has progressed quickly during the past few decades. First, the materials were based on cobalt-tungsten-chromium iron alloys. Aluminium-nickel-cobalt alloys were discovered in the 1930s, but the development of samarium-cobalt in the 1960s, and finally neodymium-iron-boron based magnets (NdFeB magnets) in the late 1970s, made it possible for electrical motors to benefit from permanent magnet materials.
Ever since, NdFeB magnets have been generating a great amount of interest among leading industrial players, thanks to their high level of energy density as well as other useful material properties, like corrosion resistance and temperature tolerance. In particular, the large remanence and coercivity of SmCo and NdFeB magnets have led to the application of these materials in industrial motor and generator drives.
Although standard induction machines (IM) have ruled the electric machine business for years, the exceptional possibilities offered by NdFeB magnets have led to a consistent, spectacular growth of their production and utilization around the world.

Improving Efficiency
A synchronous PM machine contains Neodymium-Iron-Boron (NdFeB) magnets, which are materials with a very high flux density. This makes them ideal for variable-speed motors and generators throughout the entire speed range, significantly cutting back on fuel consumption. A PM machine is typically 2–4% more efficient at full load and 10% more efficient at part load when compared with induction machines. These efficiencies result from a lack of current losses in the rotor, the absence of an exciter and reduced winding losses.
Induction machines have relatively good performance above ~1000 rpm, but are typically not very good at low speeds due to increasing rotor losses based on the relative slip of the rotor. This slip is dependent on the torque.
As an example, where a 50 rpm slip with constant torque means, at 3000 rpm, only a 1.7% relative slip causing a ~1.6% reduction in efficiency, it represents a 17% relative slip at 300 rpm, dramatically reducing the efficiency by 17%. PM machines do not have slip and thus the “slip-loss” component of the rotor is non-existent. In high-power applications at 300 rpm, it is therefore possible to achieve efficiencies of about 98%.

Diesel Generators and Marine Propulsion
PM machines offer special seafaring vessels the opportunity to lower operational costs by optimizing the fuel consumption of the diesel engine. Ships often use diesel generators, not only to provide auxiliary power for normal consumption, but also indirectly for the main propulsion. There are two different main types of diesel engines: 2-stroke and 4-stroke. The main difference from the generator point of view is the rotational speed. The 2-stroke engine has a rated speed from 50 to 200 rpm, while a 4-stroke engine is typically above 500 rpm.
Two-stroke engines in marine are mainly used for propulsion. But as the power generation may be integrated into the main propulsion system, it has to apply the same speed as the main engine or the revolutions have to be raised with a step-up gearbox.
The Switch manufactures both direct-driven shaft generators in frame sizes of 1000 and 1500 and high-speed generators in frame sizes from 450–710. So-called shaft generators are direct drives built around the main propulsion shaft, which are part of the main propulsion line. High-speed machines (~1500 rpm) are connected to the propulsion line through the gearbox. In addition to power generation, machines may also be used for electric propulsion. In such cases, separate auxiliary generators produce the propulsion power. These auxiliary generators are typically 4-stroke diesel engines.
At the end of February, WE Tech Solutions placed orders for two PMM 1000 M shaft generators from The Switch with the option for an additional two to be used in future WE Tech Solutions projects. WE Tech Solutions utilizes the PM machine both as generator and motor in their direct-drive permanent magnet shaft generator solution. The solutions will be delivered by WE Tech to Besiktas Shipyard in Turkey for installation in two 15100 DWT asphalt carrier new buildings recently ordered by Canadian ship owner Transport Desgagnés. For this type of vessel, the ability to switch to the Take Me Home mode provides Auxiliary Propulsion Drive (APD) in the same package is key. The solution provides considerable fuel and service cost savings achieved from having the auxiliary generators turned off when in sailing mode.
PM machines are also known for their unmatched design flexibility. Thanks to the high power density, PM machines can pack more power in a package that is far more compact, lighter in weight and smaller in size compared with induction machines.

The Author
Mika Koli works as the Business Development Manager for Marine at The Switch. One of his main responsibilities is to help develop the advanced drive train technology for marine applications based on permanent magnet and frequency converter technology.

(As published in the May 2015 edition of Maritime Reporter & Engineering News - http://magazines.marinelink.com/Magazines/MaritimeReporter) 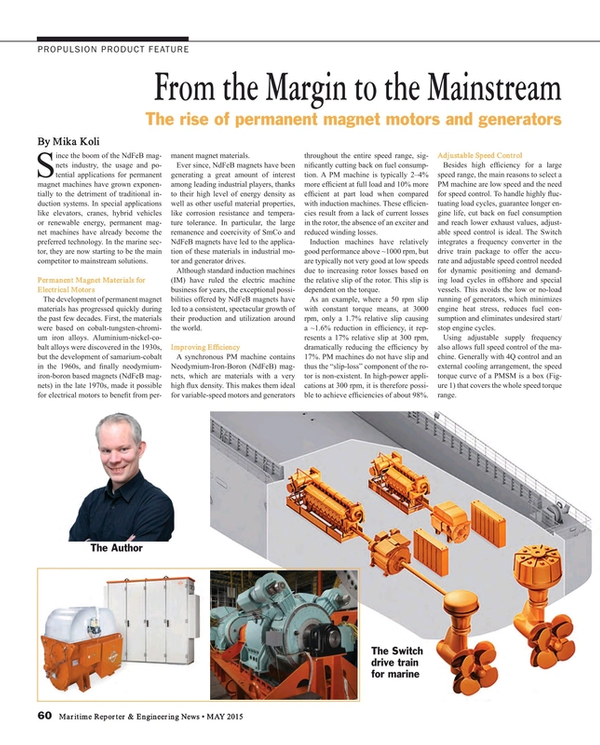 Read The Rise of Permanent Magnet Motors and Generators in Pdf, Flash or Html5 edition of May 2015 Maritime Reporter

Other stories from May 2015 issue