Terragon Environmental Technologies has been developing the Wastewater Electrochemical Treatment Technology for oily water, or simply WETT-O, for the past six years. WETT-O uses an electrochemical process to transform oily wastewater into reusable or dischargeable water depending on the application. WETT-O uses electrochemistry and does not require filters, membranes, chemicals or biological treatment commonly found in alternative approaches.
Terragon’s proprietary Electrocoagulation (EC) cartridge employs sacrificial anodes and electricity which release ions that act as coagulants. This process is designed to be effective for the removal of oils and greases, metal ions and other contaminants. The system is designed to be compact, simple to operate and maintain, even by non-technical personnel, and processes oily water on a constant basis without the need for operator attendance.
WETT-O has been through four design iterations over the last few years, with the latest being demonstrated on a commercial transport vessel. The system operated for a period of three months with exceptional results; consistently processing oily bilge water below the targeted 5 ppm. The fifth evolution of WETT-O is currently onboard a Canadian Coast Guard vessel, in conjunction with other Terragon technologies, allowing the ship to demonstrate its ability to become a zero-waste discharge vessel, while recovering and using the resources from the varying waste streams. This fifth iteration will also be used on other commercial ships in 2014 to evaluate the technology using different oily water streams which will have varying compositions.
Terragon expects to commercialize WETT-O technology in early 2015.
www.terragon.net 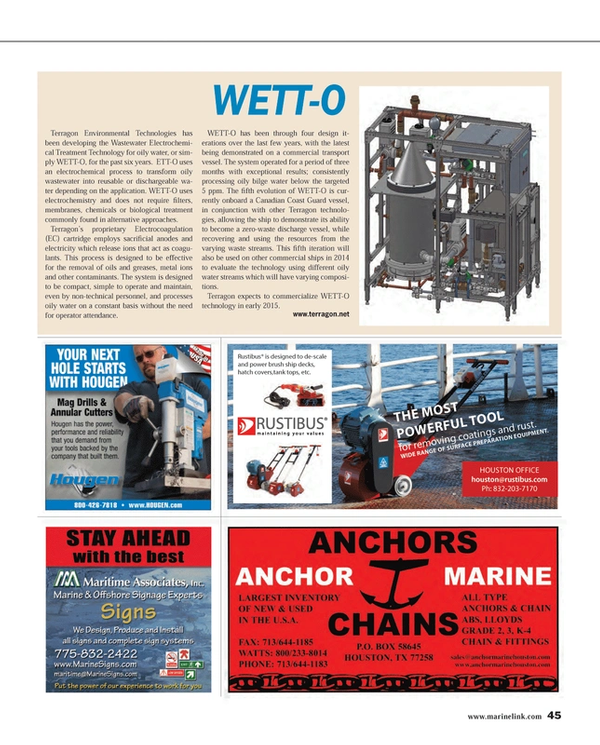