The FLNG Market is Poised for Growth

There are many different views on the future of energy supplies, but strong agreement in two areas; over the next 25 years or so population growth and GDP growth in the developing economies, particularly China and India, will drive global energy demand to increase by some 50% and second; while oil’s share of the energy mix will decline, the largest growth will be in consumption of natural gas. Why? Natural gas is an outstanding fuel for power generation, gas-fired power plant has the lowest Capex, it produces less than half of the CO2 emissions of coal, it is relatively cheap and there are abundant reserves – the International Energy Agency (IEA) suggests sufficient to last 230 years at current consumption levels.
In Asia it’s not just China and India that are propelling growth; the Southeast Asian nations are also contributing to the dynamic shift. Currently, the region’s per-capita energy consumption is suppressed due to the lack of access to electricity. However, as this is addressed, demand is expected to increase by more than 80% by 2040.
Oil, however, is a different subject. It is maintaining a high price and shows signs of an approaching peak in conventional supplies. Some would say that conventional supplies have peaked – between 2003 and 2010 it seems that the world’s top-eight international oil companies all saw a peak in production. Furthermore, between 2000 and 2012 the net growth in global oil supplies came from unconventionals, such as the United States (US) shale and Canadian oil sands, neither of which rate as cheap oil. Any restrictions in oil supplies will also serve to increase the demand for natural gas.

Importance of LNG
Most natural gas is used in the region of production, resulting in major pipeline networks in Europe and the US. However, many of the largest reserves are often great distances from markets and unlike oil, gas is expensive to transport as pipelines start to become economically unviable much beyond 1,000 km. In this situation liquefaction offers an alternative. By cooling the gas to -162 Celsius the gas liquefies and reduces to one six hundredth of its volume, allowing transportation in large insulated tanks on specially designed gas carrier ships.
Liquefaction requires specially built, high-cost complex plants, often containing several parallel process ‘trains,’ accordingly LNG plants are expensive. However, the cost of alternative energy sources is increasingly making LNG an option in many markets, Japan being a leading example, where prices are in the order of $16, compared with $9 in Europe and $4 in the US.
Some 30% of global natural gas imports are already being delivered via LNG. Supply growth in recent years has been from LNG plants in Africa, the Middle East countries of Qatar and Yemen. Considerable investment is being made in additional plants and in 2014-15 Australia should greatly add to supplies. Potential future sources of supply also include Canada, Russia, East Africa, the Eastern Mediterranean and indeed US shale gas, when political objections to natural gas exports are overcome. According to the Douglas-Westwood’s ‘World LNG Market Forecast’ over the period 2013 to 2017 $143 billion (bn) will be spent on liquefaction plants, $35bn on LNG carriers and $50bn on import facilities. The total is double that of the previous five-year period.

FLNG
However, large reserves of natural gas lie stranded offshore, beyond the economic reach of pipelines. In order to address this opportunity, floating LNG (FLNG) vessels have been designed with the first ones now under construction. A floating offshore LNG vessel eliminates the need for costly production platforms and long subsea pipelines to the shore. There are also other advantages; FLNG has attractions in providing more secure operations than onshore plants in regions with unrest such as West Africa. It also offers a solution for unwanted associated gas from oil production, which has traditionally been re-injected into fields or burnt off, resulting in environmental damage. In addition, FLNG reduces the need to construct onshore facilities in environmentally sensitive areas.
In some situations an FLNG vessel built in a specialist shipyard can offer a lower-cost solution than a one-off ‘stick built’ plant onshore. However, an FLNG vessel is still a high cost item with significant technical challenges.
Build of the world’s first FLNG vessel, to be used on Shell’s Prelude, is now underway. The vessel will be the largest ever made, at 488 meters (m) long and 74m wide, and will displace more water than six aircraft carriers. It will be moored at location for 25 years with expected production capacity of 3.6 million metric tons of LNG per year. It will be part of the pioneering batch of FLNG vessels and its success is key to the future of FLNG projects. Shell awarded the design, construction and installation to the Technip-Samsung Consortium in 2011.

Spending Shift from Middle East to Australasia
The success of the Prelude FLNG vessel is not just critical for future projects; it is also pivotal to Australia’s future domination of LNG exports as its geographical location has export advantages given its close proximity to the markets of Southeast Asia.
According to the IEA, more than two-thirds of current global investment in LNG is in Australia, where there are already three LNG export projects operating and a further seven under construction. Currently, the largest producer of LNG is Qatar, which experienced a massive 63 bcm expansion in capacity since early 2009 to reach 105 bcm in 2013.
As of late 2013, Qatar represents approximately 25% of global LNG liquefaction capacity. Other significant exporters include Indonesia, Malaysia and Algeria. Russia, Yemen, Peru and Angola have joined the LNG export business in recent years. With the inclusion of LNG exporting activities by Papua New Guinea in 2014, Australasia is poised to become the second largest LNG exporter behind Qatar by 2016.
Australia’s trajectory towards becoming a leading LNG exporter is not without its challenges. The strong Australian dollar, high taxes, labour shortages and regulatory red-tape will work against the proposed LNG projects not yet in production. Its LNG exporter position is also threatened by competition from proposed projects to liquefy North American shale gas.

North America’s Export Potential
As a result of surging shale gas production, the US is expected to overtake Russia as the world’s largest gas producer by 2015, reach self-sufficiency by 2020 and transit from a natural gas importer to a net LNG exporter. US gas self-sufficiency has prompted Canada’s search for alternative gas markets and has explored gas exports to Asia. These developments could mean a shift in reliance on traditional oil producing countries in the Middle East and would threaten Australia’s LNG export potential.
With North America’s potential as a net LNG exporter, there has been skepticism regarding assumed lower prices. Firstly, the present price of US shale gas is due to over-production.
In addition, liquefaction and shipping costs could substantially close up the arbitrage and create a convergence in prices from differing regions. Over time, could exporting from North America be uncompetitive compared to Australia through a weakening Australian dollar and increase in labor supply prompted by the slowdown in the local mining boom?

Mediterranean Progress
The eastern Mediterranean is the location of exploration activity off Cyprus, Turkey and Israel and a number of major gas discoveries. It has also been inching towards FLNG with Pangea LNG leading the development of the Tamar FLNG project, located off Israel’s coast. A second development is also planned for the neighbouring Leviathan field, which is the world’s largest offshore gas discovery in the last decade. However, while the region’s development has a compelling future, it is beset by local political instability and indeed civil war in Syria.

FLNG Capex
According to the Douglas-Westwood’s ‘World FLNG Market Forecast’ the market for the construction of FLNG vessels is expected to increase from $3.7B in the period 2007-2013 to $64.4B during 2014-2020. All eyes are on the developments in Australasia and Asia with Shell’s Prelude FLNG and Petronas’ PFLNG 1 as the pioneer FLNG developments. Asia, which is a focus area for both floating liquefaction and regasification vessels, is expected to account for 29% of expenditure, contributing $18.2bn. Australasia accounts for the largest proportion of global Capex at 30%, driven by liquefaction projects with spend of $19bn in the period 2014-2020.
Given a competitive market, we could assume that LNG will be bought from a supplier closest to the point of consumption. Indeed, factors such as geographical proximity, slowing oil production rates, technological advancement, abundant supply and unprecedented demand growth in Asia point towards a locus of FLNG development in Australian waters.
It could, however, be argued that attention should be shifted to developments in unconventional gas. However, it will be difficult for others to replicate shale gas success in the US within a decade given supply chain constraints and uncertainty over long-term production levels. While not without political issues and other impediments, the FLNG solution will, over the long term, extend beyond the pioneer projects and beyond Australian waters.

The Author
Amanda Tay BSc is a member of DW’s Analyst team, where her principal activities include quantitative analytics and macro-economic analysis, competitive analysis and supply chain mapping. She has a strong background in the Asian finance sector having spent several years with UBS AG as part of the investment banking legal and compliance team. 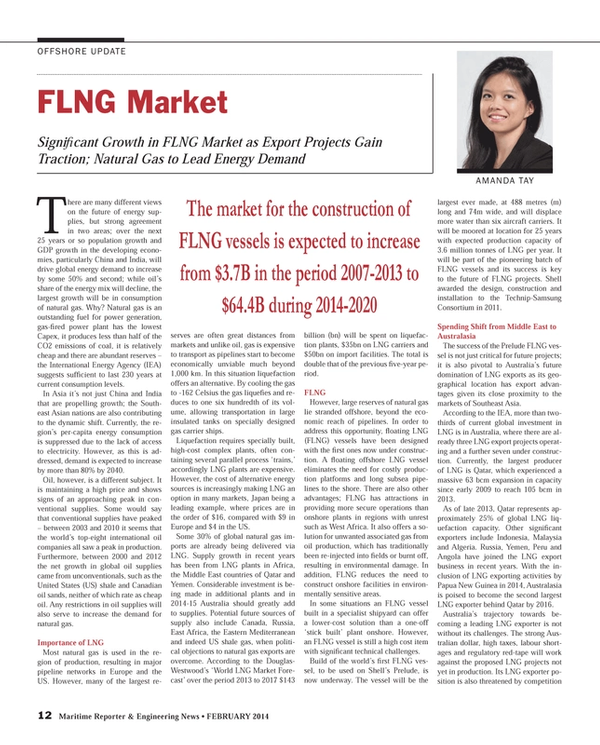 Read The FLNG Market is Poised for Growth in Pdf, Flash or Html5 edition of February 2014 Maritime Reporter