Safe water management onboard any ship is a challenge, a challenge magnified exponentially onboard the world’s largest cruise ships with thousands of passengers and crew in close quarters. Just last month it again made global headlines as Royal Caribbean’s Explorer of Seas was forced to cut its 10-day cruise short due to an estimated 700 passengers dropping ill with a with a gastrointestinal illness. Keeping quality water flowing, passengers and crew healthy is a priority for the cruise lines, and Howell Laboratories contends MIOX improves performance, reduces operating costs and protects the environment.
It is not a stretch to characterize the marine industry as conservative in the adoption of new technologies, and in the cruise market it can be expected that the introduction of ‘new’ water disinfection technology is met with a wary eye. But as Howell Laboratories sets its sites on expanding the use of MIOX disinfection technology onboard some of the world’s largest and highest value ships, Adam Jones, P.E., Director of Business Development, Commercial Products, Howell Laboratories, Inc., is quick to point out that the MIOX technology is anything but new.
“The core technology has been around for several decades and initially commercialized by MIOX,” said Jones. “They started selling systems to land-based water treatment facilities and now have installations all over the world treating Industrial, recreational and potable water supplies.”
The technology is scalable, founded as the personal use MIOX Purifier Pen using the MIOX electrolysis process converts brine into a sterilizing solution, using the same simple water disinfection chemistry of mixing salt, electricity and water.
That same technology has been used for decades on land, based in public water treatment facilities and purifying billions of gallons of water daily.
Lest you think this a land-based only tech solution, think again: Howell Laboratories, which has had a relationship with MIOX for more than a decade, has used the MIOX generators as the core to its water solutions system for some of the largest and highest value ships in the world: more than a dozen of the U.S. Navy’s largest ships, including all aircraft carriers.

The MIOX Relationship
As Jones explains, MIOX is a technology company that seeks partnerships with outside companies to penetrate specific market channels such as maritime. Interest in the maritime market was sparked by a chance meeting onboard an airplane between a MIOX executive and a cruise executive, with the ensuing conversation turning to the industry’s fight to contain the Legionella bacteria. This chance conversation turned into a test and installation aboard the Celebrity Century, with more than five years of successful operation according to Jones. It is this reference, plus the extended run aboard the U.S. Navy’s most valued assets, that Howell Laboratories is hoping will change the tide in the acceptance of the MIOX solutions on cruise ship newbuilds and refits.
“The cruise industry is interested, because frankly it works better (than existing technology) and it changes how they look at, store and handle chemicals,” said Jones. “Plus, cruise ships are arguably the largest users of fresh water on the seas.” According to Jones, the benefits of the MIOX solutions are fairly straight forward:
•    Effectiveness The system is proven to kill legionella and eliminate biofilm (which, in layman’s terms, is the gunk found in pipes). “Biofilm in the pipes helps to breed everything that you don’t want,” said Jones. “Jacuzzis are particularly problematic, as the temperature is right in that sweet spot.”
•    Cost Less to Operate The consumable, the salt to run the machine, is relatively stable in price. Factoring in the consumables and the electricity consumption, Jones loosely estimates a savings of “six figures” per ship, per year.
•    Elimination of Chemicals Simply put, the elimination of chemicals used in traditional system frees space onboard, and eliminates the mix of chemicals on a particular ship.

The System
At the heart of the system is a patented electrolytic cell requiring only Water, Electricity and Salt to generate all the disinfection chemicals required.  It is capable of producing unique Mixed Oxidant Solution (MOS) chemistry, an effective, yet environmentally benign disinfectant.  The presence of a second oxidant in the solution, which co-exists for 24-48 hours after generation, provides dramatically increased efficacy, but the MOS can be monitored and controlled with the same ease as older chlorine-based systems.
It can be used for a multitude of water applications, from drinking water, as MOS chemistry complies with all EPA, IMO, WHO, and CDC standards for safe drinking water, to recreational water, as Jones said the MOS solution achieves a better, more rapid kill on a broader range of microorganisms when compared to hypochlorite.
Similarly crucial is the system’s proven effectiveness in the removal of biofilm, an invasive substance that naturally forms throughout water distribution lines and serves as a shelter for disease-causing microorganisms.
The Howell/MIOX systems use no hazardous chemicals to generate the disinfection chemicals, and at a generated concentration of 0.45%, there is no need for Hazmat planning and reporting, as the solution is safe to handle.
As space onboard cruise ships is a premium, the system’s modular design approach is attractive.  All tanks and components are individual units, allowing optimal placement for maintenance, expansion, and even replacement of legacy equipment. Systems also interface with existing control systems.
www.howelllabs.com 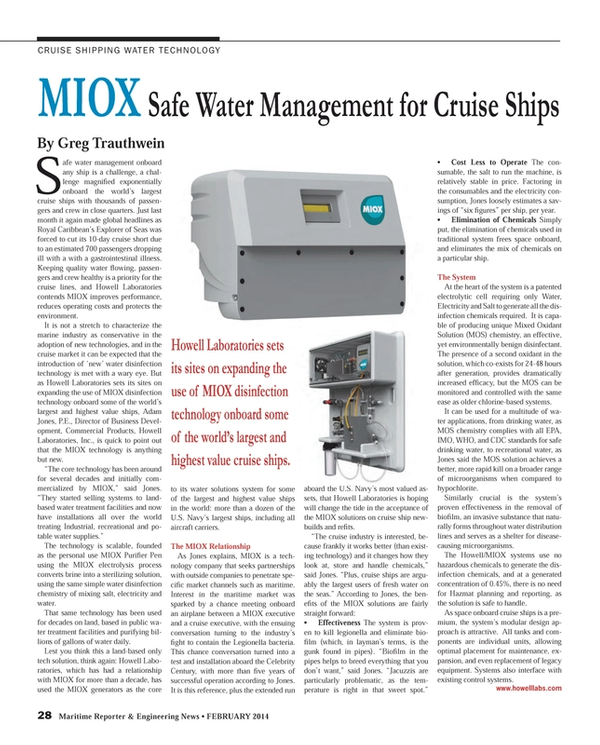