ADM Bob Papp’s Coast Guard tenure continues to be one of low profile victories, calm leadership and an emphasis on doing what is right for the Coast Guard.

U.S. Coast Guard Commandant Adm. Bob Papp delivered the 2013 State of the Coast Guard (SOCG) Address at the National Defense University at Fort Lesley J. McNair in Washington, D.C. on February 27. When
Adm. Papp assumed command of the Coast Guard in May of 2010, he had the unenviable task of following perhaps the most charismatic leader the Coast Guard has ever had. The high profile Thad Allen, dubbed by the mainstream media as “the rock star” Commandant, also more earned his reputation by firm leadership over the course of more than one highly visible crisis after another.
Papp, like Tom Collins who had to follow another popular commandant (Jim Loy), has had to carve out his own niche in different ways. And, whereas Collins had his own cross to bear as he navigated the inauspicious beginning of the Deepwater recapitalization plan with a Coast Guard that was at that time ill-prepared to undertake that task, Papp has been faced with tackling some of the ambitious projects started by his predecessors, but never finished. That work continues today. Those looking to Papp for fireworks and flash as he goes about his daily business will be sorely disappointed. On the other hand, if it is quiet, firm and consistent leadership that today’s Coast Guard is thirsting for, then Papp has been the RX that is slowly, but surely righting a dangerously overloaded ship, while stowing all of the important gear in the right places.
Papp’s latest SOCG speech was filled with nautical metaphors, but also much in the way of substance. And, reflecting the use of another federal property to deliver that message in these austere times, he also addressed the key challenges ahead for the nation’s fifth, uniformed, armed service.
As the Coast Guard finally nears its departure from the tired old headquarters at the end of 2nd Street and prepares to move into its state-of-the-art, brand new digs, there are still many challenges ahead. As he promised more than two years ago, Papp has concentrated on finishing what others have started, and during his speech, he pointed to the field level reorganization efforts started by ADM Tom Collins many years ago. Papp said, “This year we completed the field level reorganization to Sectors. The wisdom of those efforts was demonstrated during this storm (Sandy) by watching all elements of Response and Prevention and Logistics work together during our operations.” Other unfinished tasks include the continued recapitalization of the Coast guard’s aging assets, the upper leadership reorganization started by Allen but never authorized by Congress and the critical need to address the growing requirement for Coast Guard presence in the Arctic.
Also, Papp outlined just a few of the many heroic and successful rescue operations undertaken by the Coast Guard during the busy previous 12 months. That said, he then cautioned his audience that good prevention is preferable to even the best response. Unspoken in all of that might just be the ongoing regulatory changes just around the corner for the industry that Papp regulates. These include the finalization of ballast water technology approvals and enforcement, the coming subchapter “M” rules for previously uninspected inland vessels and the Maritime Labor Convention (2006), which provides comprehensive rights and protection at work for the world’s more than 1.2 million seafarers. Arguably, all of these are aimed at prevention, as opposed to response. Right up Papp’s alley, so it would seem.
Sequestration predictably came up during Papp’s remarks. And although the Commandant expressed  optimism that the Coast Guard would be able to continue meeting its missions because of the service’s greatest asset, its people, he also provided a small window into what could come as the shadow of sequestration looms over the entire federal budget. He said, in part, “… I am concerned that shrinking budgets have impacted our ability to hold courses, pay for travel to training and provide the necessary extra boat and aircraft hours. We must continually seek smarter, more innovative and more economical ways to provide these experiences. Our people deserve it and our service to the public demands it.” But, like his predecessor, ADM Thad Allen, who once said, “We’re done doing more with less,” Papp took it a step further by declaring, “… we may be asked to do less with less.”
Papp concluded his remarks, as any career cutterman should, with a few more nautical metaphors. He said, with veiled reference to his efforts to complete the unfinished work left by previous leadership, “Our job – our mission – is to set a course for the Service. We must put our efforts into moving forward, prudently navigating towards the horizon.” Arguably, he and his subordinates are already doing just that, within the constraints of a multi-missioned, inadequately funded mandate that seems to grow with each passing day.

Three for the Money
(Your money, that is)
The U.S. Coast Guard is currently bandying about three different regulatory issues, in various drafts and forms. These include the certification of ballast water treatment technologies, the final wording of the so-called “subchapter M” rules for inland vessels and now a draft NVIC circular regarding the MLC 2006 Code (which is covered in detail by Dennis Bryant this month, please see page 14). Chances are at least two out of three will cost you (a lot of) money.

Ballast Water Treatment Technology
Ballast Water Treatment and Technology in a nutshell: the IMO has enough countries but not the required percentage of the world’s fleet for ultimate ratification of their rule. The USCG rules are final and in place, the discharge standards are essentially identical to IMO. The process for USCG certification of BWMS is in place but no one has yet gone through it.
When the Coast Guard’s final rule on ballast water management became effective this past June, this momentous event perhaps signaled the end of one arduous journey for regulators, but the beginning of another for shipowners. The U.S. rule establishes discharge standards for living organisms which ballast water management systems (BWMS) must be able to satisfy. This so-called phase one standard closely conforms to the IMO’s version, bringing the dream of global standardization one step closer. Despite delays by various governments, the IMO standard is widely expected to enter into force within the next two years.
It is also not hard to understand why so few operators have, to date, installed BWMS on their vessels. The depressed state of global shipping markets over the past few years certainly has played a role. Not everyone has the reported average price of $1 million per ship needed to install the systems, and those who do, are reluctant to do so until they absolutely have to. Also lurking just around the corner is the separate, but equally important U.S. Environmental Protection Agency’s ongoing Vessel General Permit process, which also covers ballast water discharges. Adding to that uncertainty is the myriad of individual U.S. state mandates still in play and the specter of a stricter U.S. Coast Guard (phase II) standard. The U.S. Coast Guard’s certification of BWMS can take the form of an Alternate Management System (AMS), which gives a five year temporary window for flag approved systems, or permanent type approval. USCG Type approval will require (a.) that biological laboratory testing has been done AND (b.) shipboard tests as well. Applications for approvals will take about 60 days to get a verdict. If you’ve passed the testing, then type approval is possible. If not, technologies will need to go the AMS route. And it is important to note that once a ballast water management system has been approved by the Coast Guard and made available for certain classes, types or a specific vessel, then vessels will no longer be able to install AMS in lieu of type approved system(s). The five-year period is designed to provide the BWMS manufacturer time to obtain USCG approval.  Any vessel using an AMS must still comply with the terms and conditions of the U.S. EPA Vessel General Permit (VGP). The proposed 2013 VGP already contains discharge limits similar to the IMO D-2 standard.
The 600-pound gorilla in the room, however, is the reality that if you wait too long to decide on a system and have it installed, you could be paying double the price because manufacturing capacities can’t possibly keep up with the demand of as many as 50,000 vessels all needing the systems at once. You might not be able to get the system at all.

Subchapter M Rules
Pending USCG Subchapter “M” (SubM) regulations will eventually require towing operators to implement safety standards and use safety management systems, or alternatively, allow for an annual Coast Guard inspection regime. The new rules are expected to allow towing vessel organizations to customize their approach to meeting the requirements, while providing oversight using audits, inspections, and reviews of safety data. As many as 5,000 vessels and their operators will eventually feel the impact of the so-called subchapter M rules. Today, almost 1,800 domestic towing vessels do not participate in any formal industry safety schemes.
With the final language not yet determined, the ultimate cost of this far-reaching mandate is unknown. But the numbers are staggering, especially for barge companies currently operating without an existing Safety Management System (SMS) – could reach as much as $350,000. And that number doesn’t even include the cost of needed equipment upgrades.  Let’s hope the Coast Guard is up to the task of facilitating competent, timely and most importantly, fair implementation of all of these new regulations. Any one of these three mandates constitutes a serious challenge for any regulatory body; all three at once will be daunting.

(As published in the March 2013 edition of Maritime Reporter & Engineering News - www.marinelink.com) 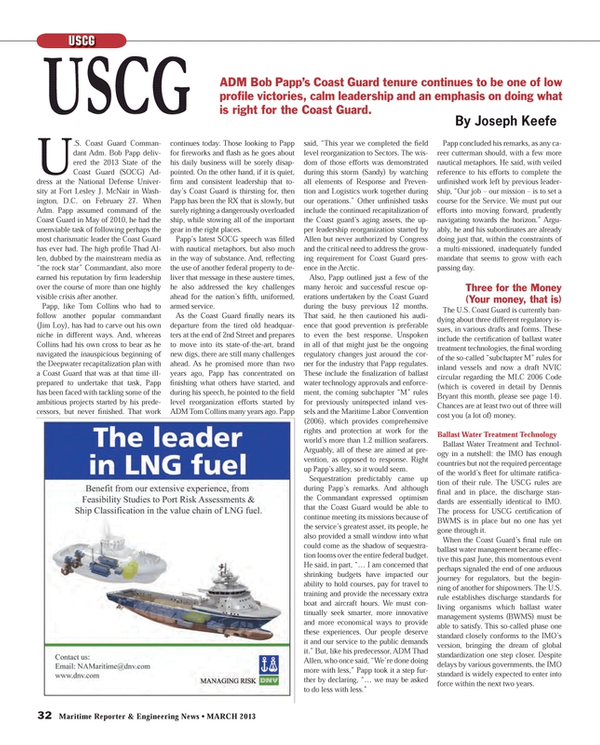