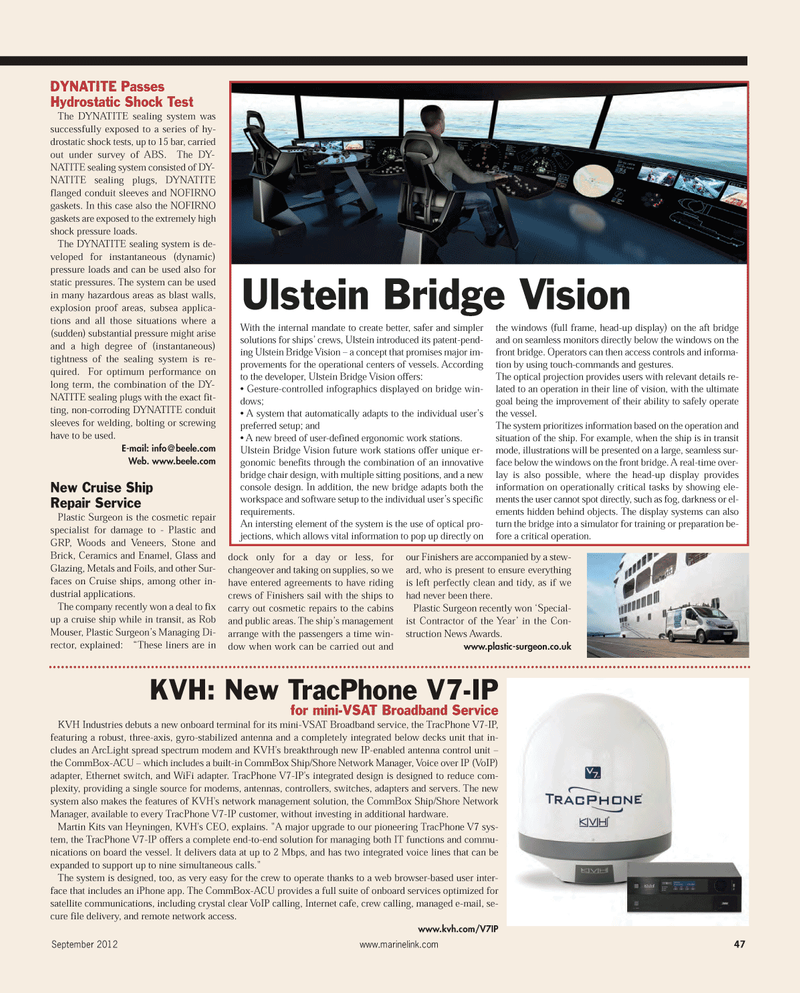 DYNATITE Passes Hydrostatic Shock Test The DYNATITE sealing system was successfully exposed to a series of hy- drostatic shock tests, up to 15 bar, carried out under survey of ABS. The DY- NATITE sealing system consisted of DY- NATITE sealing plugs, DYNATITE flanged conduit sleeves and NOFIRNO gaskets. In this case also the NOFIRNO gaskets are exposed to the extremely high shock pressure loads.The DYNATITE sealing system is de- veloped for instantaneous (dynamic) pressure loads and can be used also forstatic pressures. The system can be used in many hazardous areas as blast walls, explosion proof areas, subsea applica- tions and all those situations where a(sudden) substantial pressure might ariseand a high degree of (instantaneous) tightness of the sealing system is re-quired. For optimum performance on long term, the combination of the DY- NATITE sealing plugs with the exact fit- ting, non-corroding DYNATITE conduit sleeves for welding, bolting or screwing have to be used. E-mail: info@beele.comWeb. www.beele.com New Cruise Ship Repair ServicePlastic Surgeon is the cosmetic repair specialist for damage to - Plastic andGRP, Woods and Veneers, Stone and Brick, Ceramics and Enamel, Glass andGlazing, Metals and Foils, and other Sur- faces on Cruise ships, among other in- dustrial applications.The company recently won a deal to fix up a cruise ship while in transit, as RobMouser, Plastic Surgeon?s Managing Di- rector, explained: ?These liners are in dock only for a day or less, forchangeover and taking on supplies, so we have entered agreements to have riding crews of Finishers sail with the ships to carry out cosmetic repairs to the cabinsand public areas. The ship?s management arrange with the passengers a time win-dow when work can be carried out and our Finishers are accompanied by a stew- ard, who is present to ensure everything is left perfectly clean and tidy, as if we had never been there. Plastic Surgeon recently won ?Special- ist Contractor of the Year? in the Con- struction News Awards. www.plastic-surgeon.co.uk Ulstein Bridge Vision With the internal mandate to create better, safer and simpler solutions for ships? crews, Ulstein introduced its patent-pend- ing Ulstein Bridge Vision ? a concept that promises major im- provements for the operational centers of vessels. According to the developer, Ulstein Bridge Vision offers:  Gesture-controlled infographics displayed on bridge win-dows;  A system that automatically adapts to the individual user?s preferred setup; and  A new breed of user-defined ergonomic work stations. Ulstein Bridge Vision future work stations offer unique er- gonomic benefits through the combination of an innovative bridge chair design, with multiple sitting positions, and a new console design. In addition, the new bridge adapts both the workspace and software setup to the individual user?s specific requirements. An intersting element of the system is the use of optical pro-jections, which allows vital information to pop up directly on the windows (full frame, head-up display) on the aft bridge and on seamless monitors directly below the windows on the front bridge. Operators can then access controls and informa- tion by using touch-commands and gestures. The optical projection provides users with relevant details re- lated to an operation in their line of vision, with the ultimategoal being the improvement of their ability to safely operate the vessel. The system prioritizes information based on the operation andsituation of the ship. For example, when the ship is in transit mode, illustrations will be presented on a large, seamless sur- face below the windows on the front bridge. A real-time over- lay is also possible, where the head-up display provides information on operationally critical tasks by showing ele- ments the user cannot spot directly, such as fog, darkness or el- ements hidden behind objects. The display systems can also turn the bridge into a simulator for training or preparation be-fore a critical operation. KVH: New TracPhone V7-IP for mini-VSAT Broadband Service KVH Industries debuts a new onboard terminal for its mini-VSAT Broadband service, the TracPhone V7-IP, featuring a robust, three-axis, gyro-stabilized antenna and a completely integrated below decks unit that in- cludes an ArcLight spread spectrum modem and KVH's breakthrough new IP-enabled antenna control unit ? the CommBox-ACU ? which includes a built-in CommBox Ship/Shore Network Manager, Voice over IP (VoIP) adapter, Ethernet switch, and WiFi adapter. TracPhone V7-IP's integrated design is designed to reduce com- plexity, providing a single source for modems, antennas, controllers, switches, adapters and servers. The new system also makes the features of KVH's network management solution, the CommBox Ship/Shore Network Manager, available to every TracPhone V7-IP customer, without investing in additional hardware. Martin Kits van Heyningen, KVH's CEO, explains. "A major upgrade to our pioneering TracPhone V7 sys- tem, the TracPhone V7-IP offers a complete end-to-end solution for managing both IT functions and commu- nications on board the vessel. It delivers data at up to 2 Mbps, and has two integrated voice lines that can be expanded to support up to nine simultaneous calls." The system is designed, too, as very easy for the crew to operate thanks to a web browser-based user inter- face that includes an iPhone app. The CommBox-ACU provides a full suite of onboard services optimized for satellite communications, including crystal clear VoIP calling, Internet cafe, crew calling, managed e-mail, se- cure file delivery, and remote network access. www.kvh.com/V7IP September 2012www.marinelink.com 47MR#9 (42-49):MR Template 9/11/2012 2:11 PM Page 47