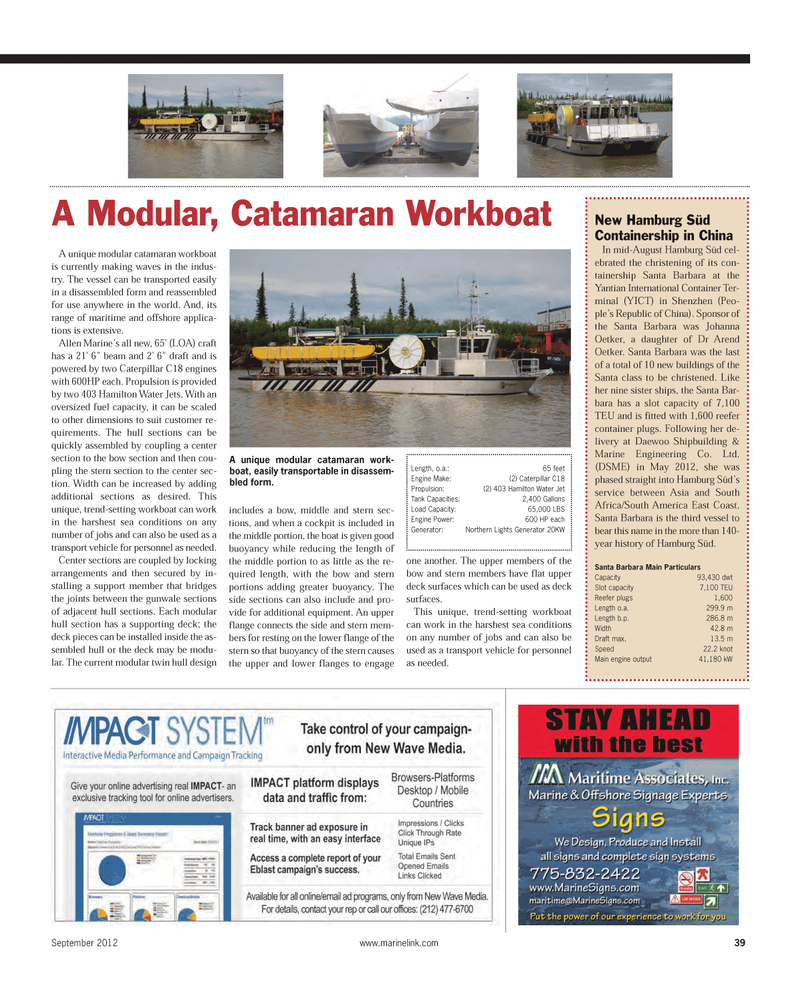 September 2012www.marinelink.com 39A Modular, Catamaran Workboat A unique modular catamaran workboat is currently making waves in the indus- try. The vessel can be transported easily in a disassembled form and reassembledfor use anywhere in the world. And, its range of maritime and offshore applica- tions is extensive. Allen Marine?s all new, 65' (LOA) craft has a 21' 6" beam and 2' 6" draft and ispowered by two Caterpillar C18 engines with 600HP each. Propulsion is provided by two 403 Hamilton Water Jets. With an oversized fuel capacity, it can be scaled to other dimensions to suit customer re-quirements. The hull sections can be quickly assembled by coupling a centersection to the bow section and then cou- pling the stern section to the center sec-tion. Width can be increased by adding additional sections as desired. This unique, trend-setting workboat can work in the harshest sea conditions on any number of jobs and can also be used as atransport vehicle for personnel as needed. Center sections are coupled by lockingarrangements and then secured by in-stalling a support member that bridgesthe joints between the gunwale sections of adjacent hull sections. Each modularhull section has a supporting deck; thedeck pieces can be installed inside the as-sembled hull or the deck may be modu-lar. The current modular twin hull design includes a bow, middle and stern sec- tions, and when a cockpit is included inthe middle portion, the boat is given good buoyancy while reducing the length of the middle portion to as little as the re-quired length, with the bow and stern portions adding greater buoyancy. The side sections can also include and pro-vide for additional equipment. An upper flange connects the side and stern mem-bers for resting on the lower flange of the stern so that buoyancy of the stern causes the upper and lower flanges to engage one another. The upper members of the bow and stern members have flat upper deck surfaces which can be used as deck surfaces. This unique, trend-setting workboat can work in the harshest sea conditions on any number of jobs and can also be used as a transport vehicle for personnel as needed. Length, o.a.:65 feetEngine Make:(2) Caterpillar C18Propulsion: (2) 403 Hamilton Water Jet Tank Capacities: 2,400 GallonsLoad Capacity:65,000 LBSEngine Power:600 HP eachGenerator:Northern Lights Generator 20KW New Hamburg Süd Containership in China In mid-August Hamburg Süd cel- ebrated the christening of its con-tainership Santa Barbara at theYantian International Container Ter- minal (YICT) in Shenzhen (Peo-ple?s Republic of China). Sponsor of the Santa Barbara was Johanna Oetker, a daughter of Dr Arend Oetker. Santa Barbara was the last of a total of 10 new buildings of the Santa class to be christened. Like her nine sister ships, the Santa Bar- bara has a slot capacity of 7,100TEU and is fitted with 1,600 reefer container plugs. Following her de- livery at Daewoo Shipbuilding & Marine Engineering Co. Ltd.(DSME) in May 2012, she was phased straight into Hamburg Süd?s service between Asia and South Africa/South America East Coast. Santa Barbara is the third vessel to bear this name in the more than 140-year history of Hamburg Süd. Santa Barbara Main Particulars Capacity93,430 dwtSlot capacity7,100 TEU Reefer plugs1,600Length o.a.299.9 mLength b.p.286.8 mWidth 42.8 mDraft max.13.5 mSpeed22.2 knotMain engine output41,180 kWA unique modular catamaran work-boat, easily transportable in disassem- bled form.MR#9 (34-41):MR Template 9/11/2012 4:25 PM Page 39