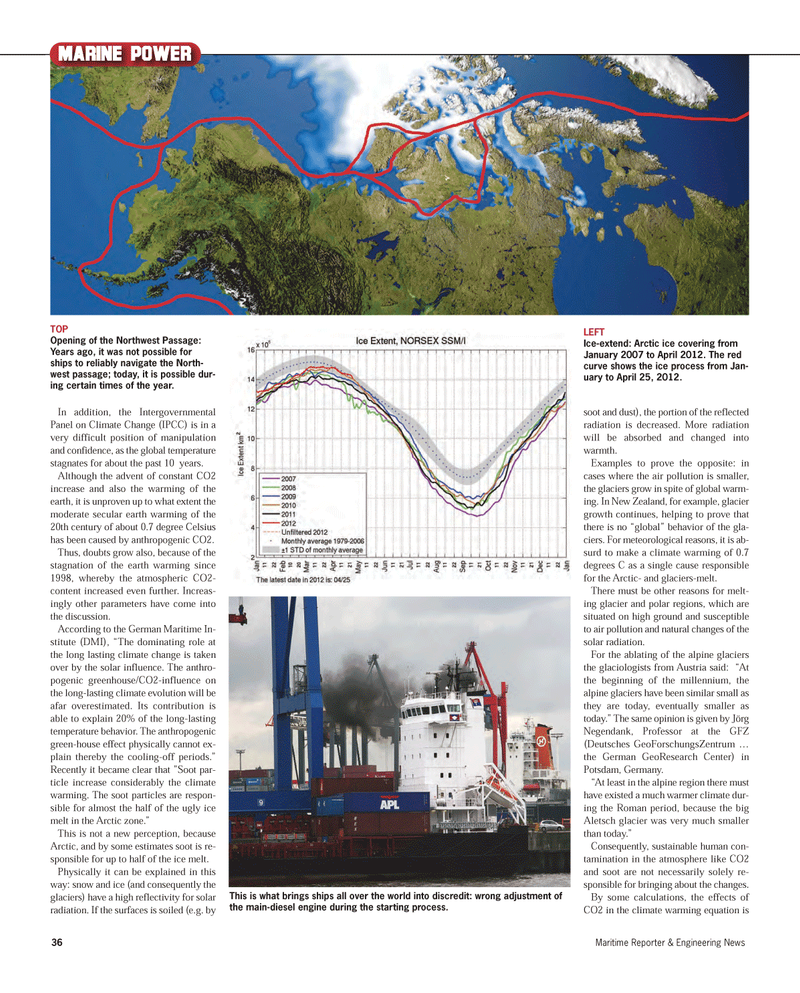 In addition, the Intergovernmental Panel on Climate Change (IPCC) is in a very difficult position of manipulation and confidence, as the global temperature stagnates for about the past 10 years. Although the advent of constant CO2 increase and also the warming of the earth, it is unproven up to what extent the moderate secular earth warming of the 20th century of about 0.7 degree Celsius has been caused by anthropogenic CO2.Thus, doubts grow also, because of the stagnation of the earth warming since 1998, whereby the atmospheric CO2-content increased even further. Increas- ingly other parameters have come into the discussion.According to the German Maritime In-stitute (DMI), ?The dominating role atthe long lasting climate change is taken over by the solar influence. The anthro- pogenic greenhouse/CO2-influence onthe long-lasting climate evolution will be afar overestimated. Its contribution is able to explain 20% of the long-lasting temperature behavior. The anthropogenic green-house effect physically cannot ex- plain thereby the cooling-off periods.? Recently it became clear that ?Soot par- ticle increase considerably the climatewarming. The soot particles are respon- sible for almost the half of the ugly icemelt in the Arctic zone.? This is not a new perception, because Arctic, and by some estimates soot is re-sponsible for up to half of the ice melt.Physically it can be explained in this way: snow and ice (and consequently the glaciers) have a high reflectivity for solar radiation. If the surfaces is soiled (e.g. by soot and dust), the portion of the reflectedradiation is decreased. More radiationwill be absorbed and changed intowarmth. Examples to prove the opposite: in cases where the air pollution is smaller, the glaciers grow in spite of global warm- ing. In New Zealand, for example, glacier growth continues, helping to prove that there is no ?global? behavior of the gla- ciers. For meteorological reasons, it is ab- surd to make a climate warming of 0.7 degrees C as a single cause responsible for the Arctic- and glaciers-melt. There must be other reasons for melt-ing glacier and polar regions, which are situated on high ground and susceptibleto air pollution and natural changes of thesolar radiation. For the ablating of the alpine glaciers the glaciologists from Austria said: ?At the beginning of the millennium, the alpine glaciers have been similar small as they are today, eventually smaller as today.? The same opinion is given by Jörg Negendank, Professor at the GFZ (Deutsches GeoForschungsZentrum ? the German GeoResearch Center) inPotsdam, Germany. ?At least in the alpine region there must have existed a much warmer climate dur- ing the Roman period, because the bigAletsch glacier was very much smaller than today.? Consequently, sustainable human con- tamination in the atmosphere like CO2 and soot are not necessarily solely re-sponsible for bringing about the changes. By some calculations, the effects of CO2 in the climate warming equation is 36Maritime Reporter & Engineering News Marine PowerLEFTIce-extend: Arctic ice covering from January 2007 to April 2012. The redcurve shows the ice process from Jan- uary to April 25, 2012.TOPOpening of the Northwest Passage: Years ago, it was not possible forships to reliably navigate the North- west passage; today, it is possible dur- ing certain times of the year. This is what brings ships all over the world into discredit: wrong adjustment of the main-diesel engine during the starting process. MR#9 (34-41):MR Template 9/11/2012 4:22 PM Page 36