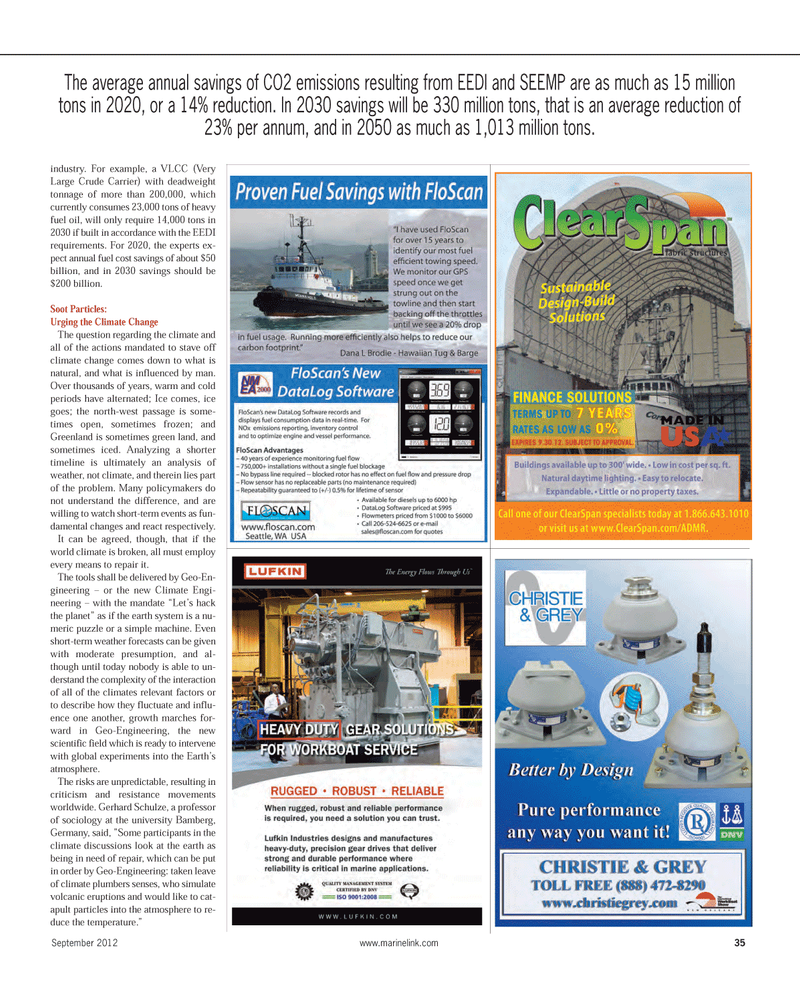 September 2012www.marinelink.com 35industry. For example, a VLCC (Very Large Crude Carrier) with deadweight tonnage of more than 200,000, whichcurrently consumes 23,000 tons of heavy fuel oil, will only require 14,000 tons in2030 if built in accordance with the EEDI requirements. For 2020, the experts ex- pect annual fuel cost savings of about $50 billion, and in 2030 savings should be $200 billion.Soot Particles: Urging the Climate Change The question regarding the climate and all of the actions mandated to stave off climate change comes down to what is natural, and what is influenced by man.Over thousands of years, warm and cold periods have alternated; Ice comes, ice goes; the north-west passage is some-times open, sometimes frozen; andGreenland is sometimes green land, andsometimes iced. Analyzing a shorter timeline is ultimately an analysis ofweather, not climate, and therein lies part of the problem. Many policymakers do not understand the difference, and are willing to watch short-term events as fun- damental changes and react respectively. It can be agreed, though, that if theworld climate is broken, all must employ every means to repair it. The tools shall be delivered by Geo-En- gineering ? or the new Climate Engi- neering ? with the mandate ?Let?s hack the planet? as if the earth system is a nu-meric puzzle or a simple machine. Even short-term weather forecasts can be given with moderate presumption, and al-though until today nobody is able to un-derstand the complexity of the interaction of all of the climates relevant factors or to describe how they fluctuate and influ- ence one another, growth marches for- ward in Geo-Engineering, the new scientific field which is ready to intervene with global experiments into the Earth?s atmosphere. The risks are unpredictable, resulting incriticism and resistance movements worldwide. Gerhard Schulze, a professor of sociology at the university Bamberg, Germany, said, ?Some participants in the climate discussions look at the earth asbeing in need of repair, which can be put in order by Geo-Engineering: taken leave of climate plumbers senses, who simulatevolcanic eruptions and would like to cat- apult particles into the atmosphere to re-duce the temperature.? The average annual savings of CO2 emissions resulting from EEDI and SEEMP are as much as 15 million tons in 2020, or a 14% reduction. In 2030 savings will be 330 million tons, that is an average reduction of 23% per annum, and in 2050 as much as 1,013 million tons.MR#9 (34-41):MR Template 9/12/2012 12:11 PM Page 35