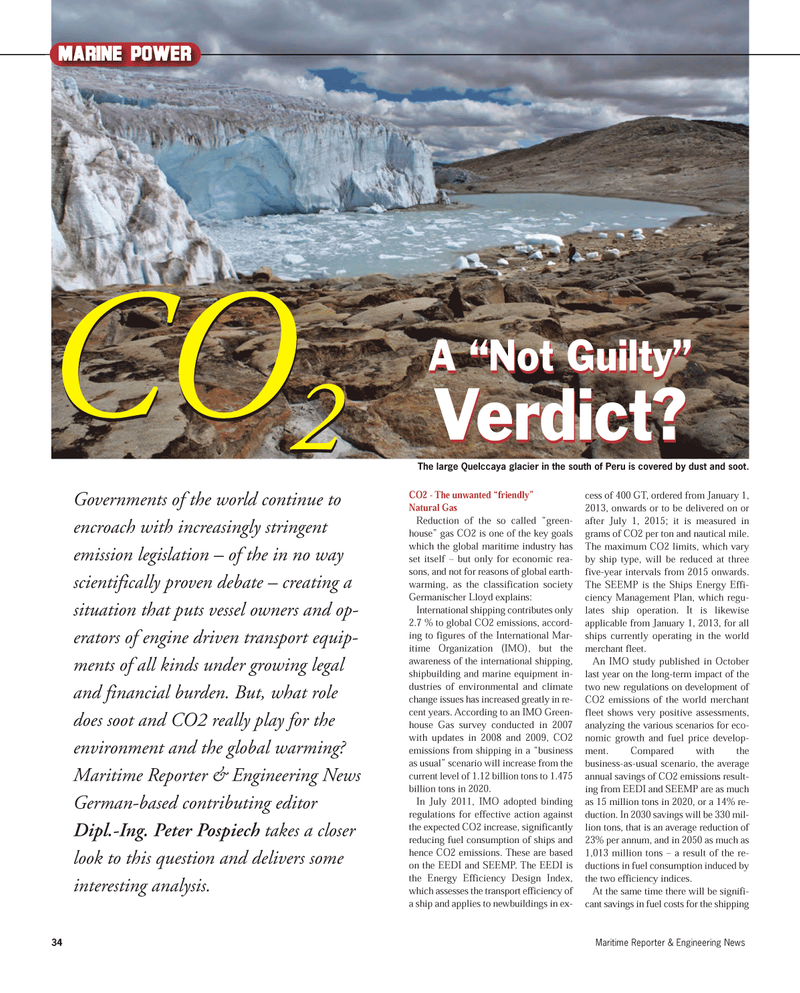 34Maritime Reporter & Engineering News Marine PowerCO2 - The unwanted ?friendly? Natural GasReduction of the so called ?green-house? gas CO2 is one of the key goals which the global maritime industry hasset itself ? but only for economic rea- sons, and not for reasons of global earth-warming, as the classification society Germanischer Lloyd explains: International shipping contributes only 2.7 % to global CO2 emissions, accord-ing to figures of the International Mar- itime Organization (IMO), but the awareness of the international shipping, shipbuilding and marine equipment in- dustries of environmental and climate change issues has increased greatly in re-cent years. According to an IMO Green- house Gas survey conducted in 2007 with updates in 2008 and 2009, CO2emissions from shipping in a ?business as usual? scenario will increase from thecurrent level of 1.12 billion tons to 1.475 billion tons in 2020.In July 2011, IMO adopted bindingregulations for effective action against the expected CO2 increase, significantly reducing fuel consumption of ships andhence CO2 emissions. These are based on the EEDI and SEEMP. The EEDI is the Energy Efficiency Design Index, which assesses the transport efficiency of a ship and applies to newbuildings in ex- cess of 400 GT, ordered from January 1, 2013, onwards or to be delivered on or after July 1, 2015; it is measured ingrams of CO2 per ton and nautical mile.The maximum CO2 limits, which vary by ship type, will be reduced at threefive-year intervals from 2015 onwards. The SEEMP is the Ships Energy Effi- ciency Management Plan, which regu- lates ship operation. It is likewise applicable from January 1, 2013, for allships currently operating in the world merchant fleet.An IMO study published in Octoberlast year on the long-term impact of thetwo new regulations on development of CO2 emissions of the world merchant fleet shows very positive assessments, analyzing the various scenarios for eco- nomic growth and fuel price develop- ment. Compared with thebusiness-as-usual scenario, the average annual savings of CO2 emissions result- ing from EEDI and SEEMP are as muchas 15 million tons in 2020, or a 14% re-duction. In 2030 savings will be 330 mil- lion tons, that is an average reduction of 23% per annum, and in 2050 as much as1,013 million tons ? a result of the re-ductions in fuel consumption induced bythe two efficiency indices. At the same time there will be signifi- cant savings in fuel costs for the shipping Governments of the world continue to encroach with increasingly stringent emission legislation ? of the in no wayscientifically proven debate ? creating a situation that puts vessel owners and op- erators of engine driven transport equip- ments of all kinds under growing legal and financial burden. But, what role does soot and CO2 really play for the environment and the global warming? Maritime Reporter & Engineering News German-based contributing editor Dipl.-Ing. Peter Pospiech takes a closerlook to this question and delivers some interesting analysis. A ?Not Guilty?Verdict? CO2CO2A ?Not Guilty?Verdict? The large Quelccaya glacier in the south of Peru is covered by dust and soot. MR#9 (34-41):MR Template 9/11/2012 4:21 PM Page 34