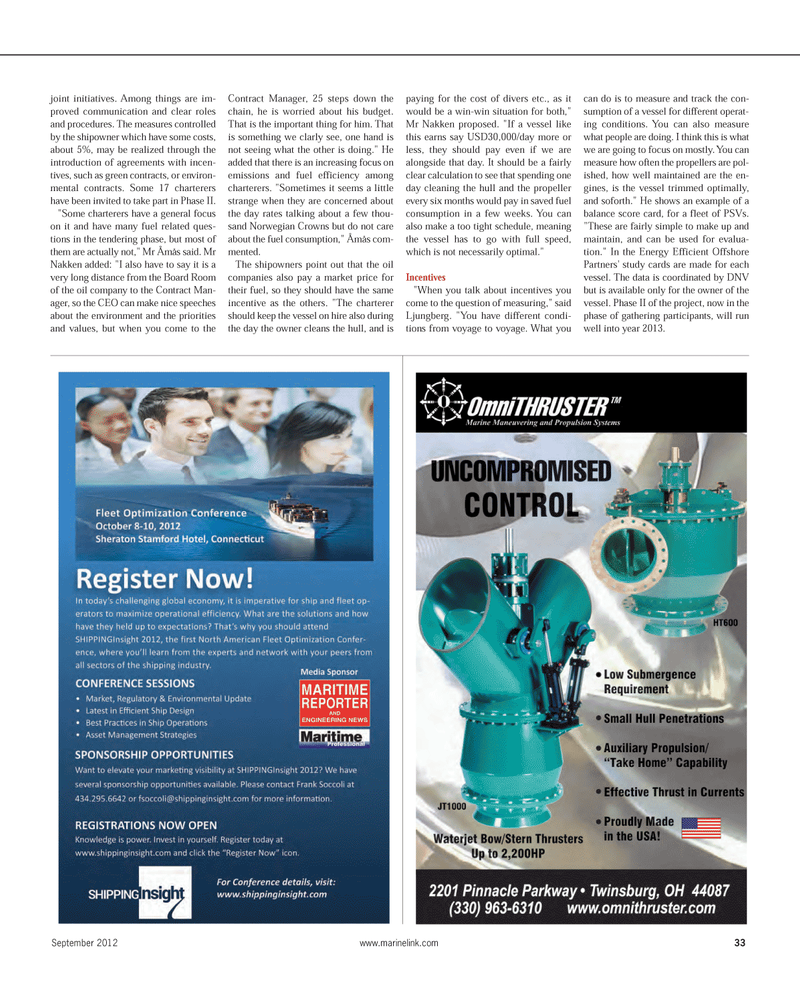 September 2012www.marinelink.com 33joint initiatives. Among things are im- proved communication and clear roles and procedures. The measures controlled by the shipowner which have some costs, about 5%, may be realized through theintroduction of agreements with incen-tives, such as green contracts, or environ- mental contracts. Some 17 charterershave been invited to take part in Phase II. "Some charterers have a general focus on it and have many fuel related ques- tions in the tendering phase, but most of them are actually not," Mr Åmås said. MrNakken added: "I also have to say it is a very long distance from the Board Room of the oil company to the Contract Man- ager, so the CEO can make nice speeches about the environment and the priorities and values, but when you come to the Contract Manager, 25 steps down the chain, he is worried about his budget. That is the important thing for him. That is something we clarly see, one hand isnot seeing what the other is doing." Headded that there is an increasing focus onemissions and fuel efficiency among charterers. "Sometimes it seems a littlestrange when they are concerned about the day rates talking about a few thou- sand Norwegian Crowns but do not care about the fuel consumption," Åmås com-mented. The shipowners point out that the oil companies also pay a market price for their fuel, so they should have the same incentive as the others. "The charterer should keep the vessel on hire also during the day the owner cleans the hull, and is paying for the cost of divers etc., as it would be a win-win situation for both," Mr Nakken proposed. "If a vessel like this earns say USD30,000/day more orless, they should pay even if we are alongside that day. It should be a fairly clear calculation to see that spending oneday cleaning the hull and the propellerevery six months would pay in saved fuel consumption in a few weeks. You can also make a too tight schedule, meaning the vessel has to go with full speed, which is not necessarily optimal." Incentives "When you talk about incentives you come to the question of measuring," saidLjungberg. "You have different condi- tions from voyage to voyage. What you can do is to measure and track the con-sumption of a vessel for different operat- ing conditions. You can also measure what people are doing. I think this is whatwe are going to focus on mostly. You can measure how often the propellers are pol- ished, how well maintained are the en- gines, is the vessel trimmed optimally, and soforth." He shows an example of a balance score card, for a fleet of PSVs."These are fairly simple to make up and maintain, and can be used for evalua- tion." In the Energy Efficient Offshore Partners' study cards are made for each vessel. The data is coordinated by DNV but is available only for the owner of the vessel. Phase II of the project, now in the phase of gathering participants, will run well into year 2013. MR#9 (26-33):MR Template 9/11/2012 1:59 PM Page 33