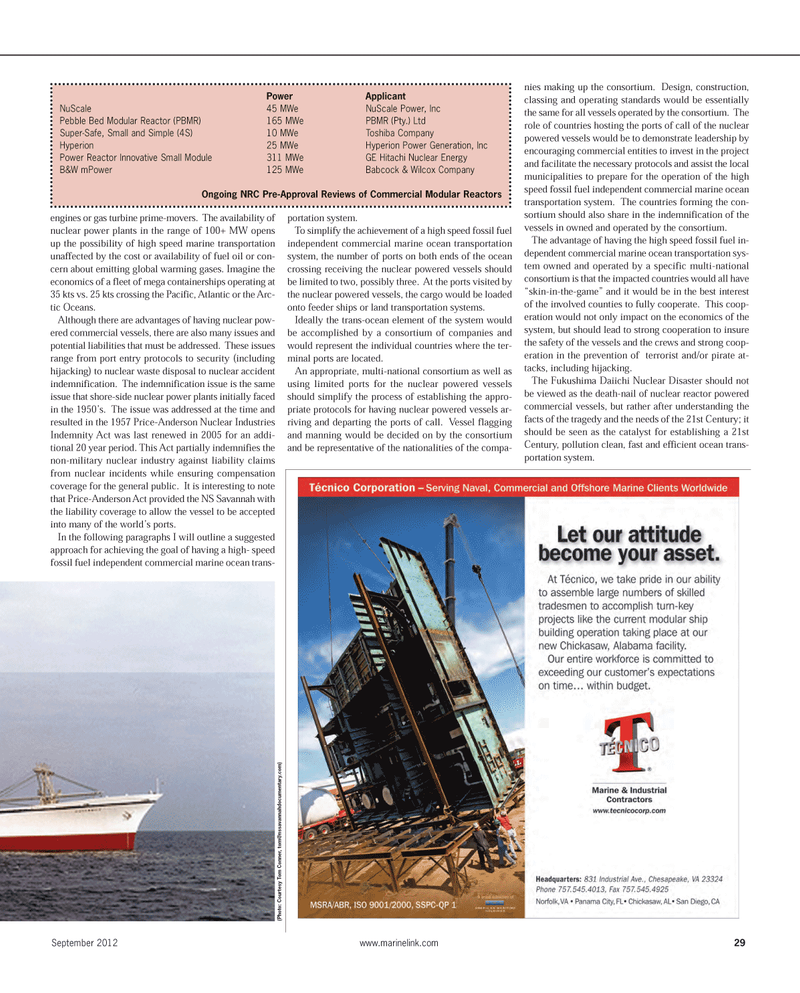 September 2012www.marinelink.com 29engines or gas turbine prime-movers. The availability of nuclear power plants in the range of 100+ MW opens up the possibility of high speed marine transportationunaffected by the cost or availability of fuel oil or con- cern about emitting global warming gases. Imagine the economics of a fleet of mega containerships operating at 35 kts vs. 25 kts crossing the Pacific, Atlantic or the Arc- tic Oceans.Although there are advantages of having nuclear pow- ered commercial vessels, there are also many issues and potential liabilities that must be addressed. These issues range from port entry protocols to security (includinghijacking) to nuclear waste disposal to nuclear accident indemnification. The indemnification issue is the same issue that shore-side nuclear power plants initially faced in the 1950?s. The issue was addressed at the time and resulted in the 1957 Price-Anderson Nuclear IndustriesIndemnity Act was last renewed in 2005 for an addi- tional 20 year period. This Act partially indemnifies the non-military nuclear industry against liability claims from nuclear incidents while ensuring compensationcoverage for the general public. It is interesting to note that Price-Anderson Act provided the NS Savannah with the liability coverage to allow the vessel to be accepted into many of the world?s ports. In the following paragraphs I will outline a suggested approach for achieving the goal of having a high- speed fossil fuel independent commercial marine ocean trans-portation system.To simplify the achievement of a high speed fossil fuel independent commercial marine ocean transportationsystem, the number of ports on both ends of the oceancrossing receiving the nuclear powered vessels should be limited to two, possibly three. At the ports visited by the nuclear powered vessels, the cargo would be loaded onto feeder ships or land transportation systems. Ideally the trans-ocean element of the system would be accomplished by a consortium of companies andwould represent the individual countries where the ter- minal ports are located. An appropriate, multi-national consortium as well asusing limited ports for the nuclear powered vessels should simplify the process of establishing the appro-priate protocols for having nuclear powered vessels ar- riving and departing the ports of call. Vessel flagging and manning would be decided on by the consortium and be representative of the nationalities of the compa- nies making up the consortium. Design, construction,classing and operating standards would be essentially the same for all vessels operated by the consortium. The role of countries hosting the ports of call of the nuclearpowered vessels would be to demonstrate leadership by encouraging commercial entities to invest in the project and facilitate the necessary protocols and assist the local municipalities to prepare for the operation of the highspeed fossil fuel independent commercial marine oceantransportation system. The countries forming the con- sortium should also share in the indemnification of the vessels in owned and operated by the consortium. The advantage of having the high speed fossil fuel in- dependent commercial marine ocean transportation sys-tem owned and operated by a specific multi-national consortium is that the impacted countries would all have ?skin-in-the-game? and it would be in the best interest of the involved counties to fully cooperate. This coop- eration would not only impact on the economics of the system, but should lead to strong cooperation to insure the safety of the vessels and the crews and strong coop- eration in the prevention of terrorist and/or pirate at- tacks, including hijacking. The Fukushima Daiichi Nuclear Disaster should notbe viewed as the death-nail of nuclear reactor powered commercial vessels, but rather after understanding the facts of the tragedy and the needs of the 21st Century; it should be seen as the catalyst for establishing a 21stCentury, pollution clean, fast and efficient ocean trans- portation system. (Photo: Courtesy Tom Conner, tom@nssavannahdocumentary.com) PowerApplicantNuScale45 MWe NuScale Power, Inc Pebble Bed Modular Reactor (PBMR)165 MWe PBMR (Pty.) Ltd Super-Safe, Small and Simple (4S)10 MWe Toshiba Company Hyperion25 MWe Hyperion Power Generation, IncPower Reactor Innovative Small Module311 MWe GE Hitachi Nuclear Energy B&W mPower 125 MWe Babcock & Wilcox Company Ongoing NRC Pre-Approval Reviews of Commercial Modular Reactors MR#9 (26-33):MR Template 9/11/2012 1:54 PM Page 29