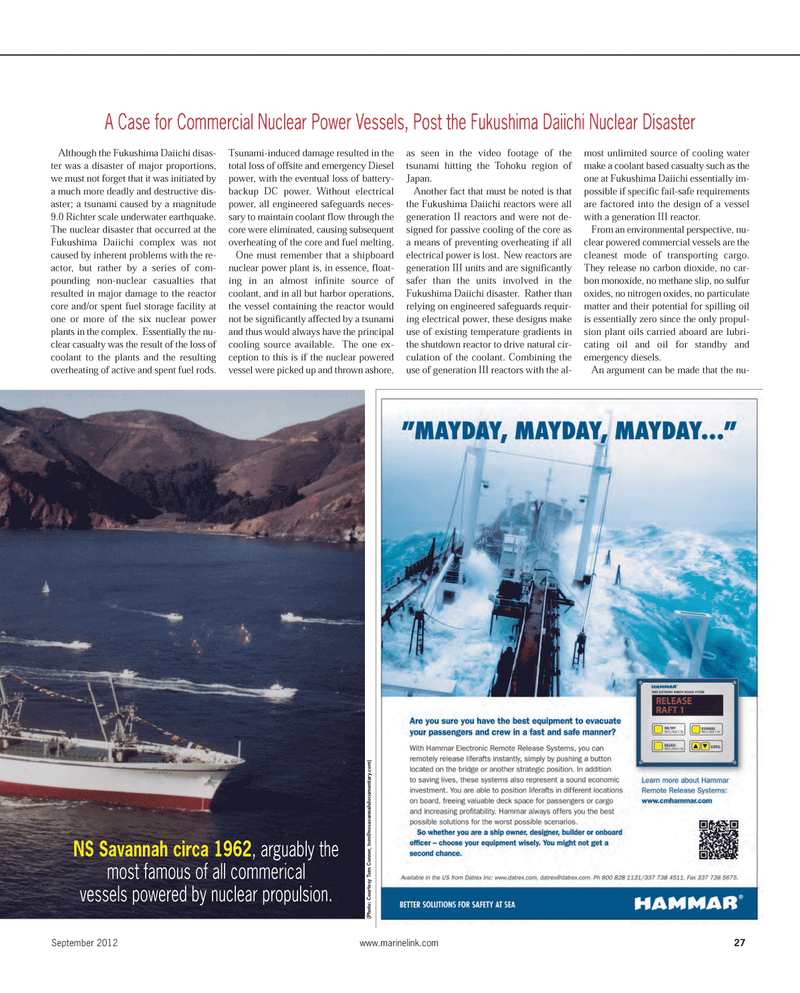 September 2012www.marinelink.com 27Although the Fukushima Daiichi disas-ter was a disaster of major proportions, we must not forget that it was initiated by a much more deadly and destructive dis- aster; a tsunami caused by a magnitude9.0 Richter scale underwater earthquake. The nuclear disaster that occurred at theFukushima Daiichi complex was not caused by inherent problems with the re-actor, but rather by a series of com- pounding non-nuclear casualties thatresulted in major damage to the reactorcore and/or spent fuel storage facility at one or more of the six nuclear power plants in the complex. Essentially the nu- clear casualty was the result of the loss of coolant to the plants and the resultingoverheating of active and spent fuel rods. Tsunami-induced damage resulted in thetotal loss of offsite and emergency Diesel power, with the eventual loss of battery- backup DC power. Without electrical power, all engineered safeguards neces- sary to maintain coolant flow through the core were eliminated, causing subsequentoverheating of the core and fuel melting. One must remember that a shipboardnuclear power plant is, in essence, float- ing in an almost infinite source of coolant, and in all but harbor operations, the vessel containing the reactor would not be significantly affected by a tsunami and thus would always have the principal cooling source available. The one ex- ception to this is if the nuclear powered vessel were picked up and thrown ashore, as seen in the video footage of thetsunami hitting the Tohoku region of Japan.Another fact that must be noted is that the Fukushima Daiichi reactors were allgeneration II reactors and were not de-signed for passive cooling of the core as a means of preventing overheating if all electrical power is lost. New reactors are generation III units and are significantly safer than the units involved in the Fukushima Daiichi disaster. Rather than relying on engineered safeguards requir- ing electrical power, these designs make use of existing temperature gradients in the shutdown reactor to drive natural cir- culation of the coolant. Combining theuse of generation III reactors with the al-most unlimited source of cooling water make a coolant based casualty such as the one at Fukushima Daiichi essentially im-possible if specific fail-safe requirements are factored into the design of a vessel with a generation III reactor. From an environmental perspective, nu- clear powered commercial vessels are the cleanest mode of transporting cargo. They release no carbon dioxide, no car- bon monoxide, no methane slip, no sulfuroxides, no nitrogen oxides, no particulatematter and their potential for spilling oilis essentially zero since the only propul-sion plant oils carried aboard are lubri-cating oil and oil for standby andemergency diesels. An argument can be made that the nu- A Case for Commercial Nuclear Power Vessels, Post the Fukushima Daiichi Nuclear Disaster NS Savannah circa 1962 , arguably the most famous of all commerical vessels powered by nuclear propulsion. (Photo: Courtesy Tom Conner, tom@nssavannahdocumentary.com) MR#9 (26-33):MR Template 9/11/2012 1:53 PM Page 27