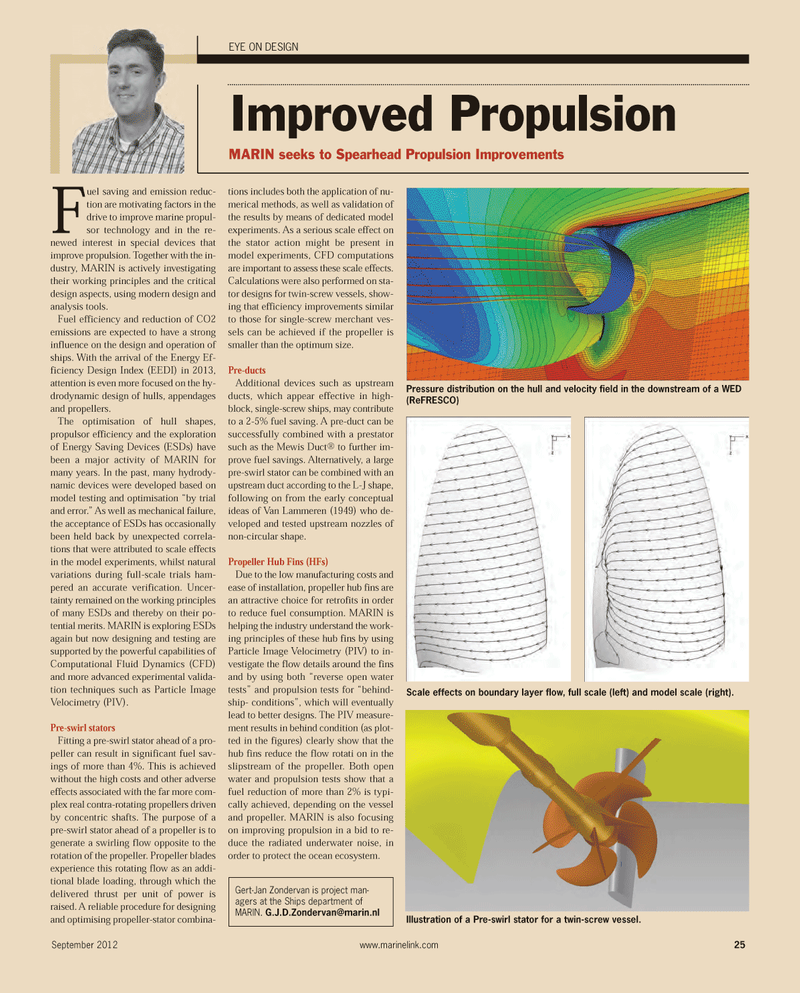 September 2012www.marinelink.com 25Fuel saving and emission reduc- tion are motivating factors in the drive to improve marine propul- sor technology and in the re-newed interest in special devices that improve propulsion. Together with the in- dustry, MARIN is actively investigating their working principles and the critical design aspects, using modern design andanalysis tools.Fuel efficiency and reduction of CO2 emissions are expected to have a strong influence on the design and operation ofships. With the arrival of the Energy Ef- ficiency Design Index (EEDI) in 2013, attention is even more focused on the hy- drodynamic design of hulls, appendagesand propellers. The optimisation of hull shapes,propulsor efficiency and the exploration of Energy Saving Devices (ESDs) have been a major activity of MARIN for many years. In the past, many hydrody- namic devices were developed based on model testing and optimisation ?by trialand error.? As well as mechanical failure, the acceptance of ESDs has occasionallybeen held back by unexpected correla- tions that were attributed to scale effects in the model experiments, whilst natural variations during full-scale trials ham- pered an accurate verification. Uncer- tainty remained on the working principles of many ESDs and thereby on their po- tential merits. MARIN is exploring ESDs again but now designing and testing are supported by the powerful capabilities of Computational Fluid Dynamics (CFD)and more advanced experimental valida- tion techniques such as Particle Image Velocimetry (PIV). Pre-swirl stators Fitting a pre-swirl stator ahead of a pro-peller can result in significant fuel sav- ings of more than 4%. This is achieved without the high costs and other adverse effects associated with the far more com- plex real contra-rotating propellers driven by concentric shafts. The purpose of a pre-swirl stator ahead of a propeller is togenerate a swirling flow opposite to the rotation of the propeller. Propeller blades experience this rotating flow as an addi- tional blade loading, through which thedelivered thrust per unit of power is raised. A reliable procedure for designing and optimising propeller-stator combina- tions includes both the application of nu-merical methods, as well as validation of the results by means of dedicated modelexperiments. As a serious scale effect on the stator action might be present inmodel experiments, CFD computations are important to assess these scale effects. Calculations were also performed on sta-tor designs for twin-screw vessels, show- ing that efficiency improvements similar to those for single-screw merchant ves- sels can be achieved if the propeller is smaller than the optimum size. Pre-ducts Additional devices such as upstream ducts, which appear effective in high- block, single-screw ships, may contribute to a 2-5% fuel saving. A pre-duct can be successfully combined with a prestatorsuch as the Mewis Duct® to further im- prove fuel savings. Alternatively, a large pre-swirl stator can be combined with anupstream duct according to the L-J shape,following on from the early conceptual ideas of Van Lammeren (1949) who de- veloped and tested upstream nozzles of non-circular shape.Propeller Hub Fins (HFs) Due to the low manufacturing costs and ease of installation, propeller hub fins are an attractive choice for retrofits in order to reduce fuel consumption. MARIN ishelping the industry understand the work- ing principles of these hub fins by using Particle Image Velocimetry (PIV) to in- vestigate the flow details around the fins and by using both ?reverse open water tests? and propulsion tests for ?behind-ship- conditions?, which will eventually lead to better designs. The PIV measure- ment results in behind condition (as plot-ted in the figures) clearly show that the hub fins reduce the flow rotati on in the slipstream of the propeller. Both open water and propulsion tests show that a fuel reduction of more than 2% is typi-cally achieved, depending on the vessel and propeller. MARIN is also focusing on improving propulsion in a bid to re- duce the radiated underwater noise, in order to protect the ocean ecosystem.EYE ON DESIGNImproved Propulsion MARIN seeks to Spearhead Propulsion Improvements Gert-Jan Zondervan is project man- agers at the Ships department of MARIN. G.J.D.Zondervan@marin.nl Pressure distribution on the hull and velocity field in the downstream of a WED (ReFRESCO)Scale effects on boundary layer flow, full scale (left) and model scale (right). Illustration of a Pre-swirl stator for a twin-screw vessel. MR#9 (18-25):MR Template 9/11/2012 1:45 PM Page 25