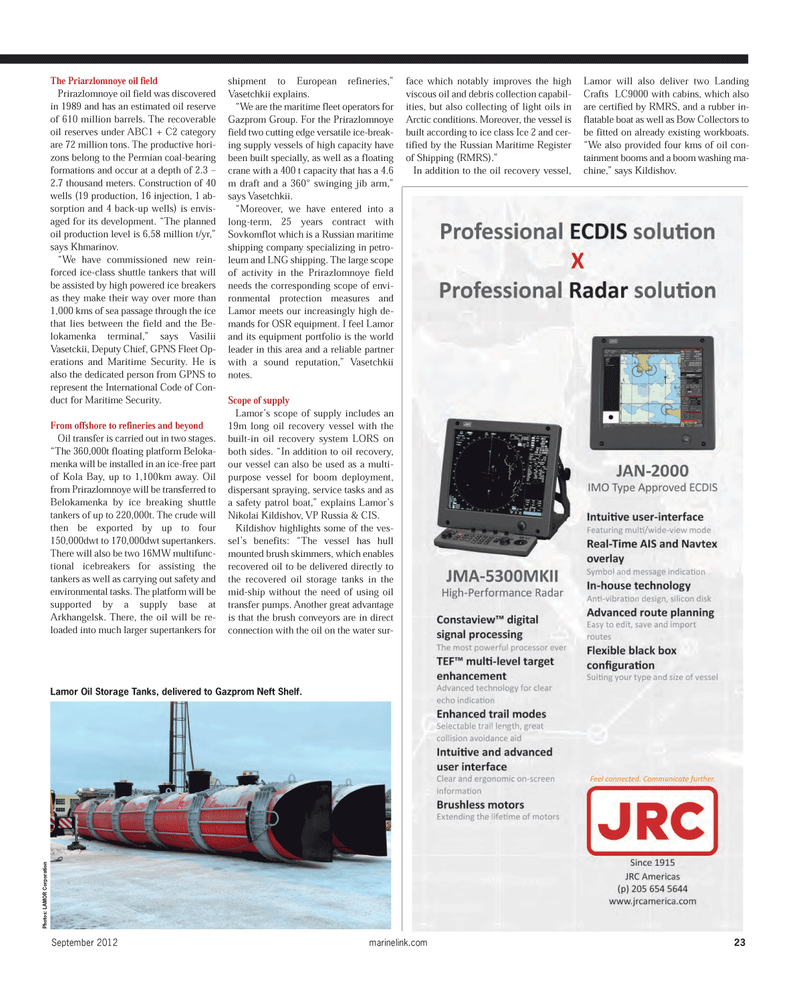 The Priarzlomnoye oil field Prirazlomnoye oil field was discovered in 1989 and has an estimated oil reserve of 610 million barrels. The recoverable oil reserves under ABC1 + C2 category are 72 million tons. The productive hori- zons belong to the Permian coal-bearingformations and occur at a depth of 2.3 ?2.7 thousand meters. Construction of 40wells (19 production, 16 injection, 1 ab-sorption and 4 back-up wells) is envis- aged for its development. ?The planned oil production level is 6.58 million t/yr,? says Khmarinov. ?We have commissioned new rein- forced ice-class shuttle tankers that will be assisted by high powered ice breakers as they make their way over more than 1,000 kms of sea passage through the icethat lies between the field and the Be- lokamenka terminal,? says Vasilii Vasetckii, Deputy Chief, GPNS Fleet Op- erations and Maritime Security. He is also the dedicated person from GPNS torepresent the International Code of Con-duct for Maritime Security. From offshore to refineries and beyond Oil transfer is carried out in two stages. ?The 360,000t floating platform Beloka-menka will be installed in an ice-free partof Kola Bay, up to 1,100km away. Oil from Prirazlomnoye will be transferred to Belokamenka by ice breaking shuttletankers of up to 220,000t. The crude will then be exported by up to four 150,000dwt to 170,000dwt supertankers. There will also be two 16MW multifunc- tional icebreakers for assisting the tankers as well as carrying out safety and environmental tasks. The platform will be supported by a supply base atArkhangelsk. There, the oil will be re- loaded into much larger supertankers for shipment to European refineries,? Vasetchkii explains. ?We are the maritime fleet operators for Gazprom Group. For the Prirazlomnoye field two cutting edge versatile ice-break- ing supply vessels of high capacity have been built specially, as well as a floating crane with a 400 t capacity that has a 4.6m draft and a 360° swinging jib arm,? says Vasetchkii. ?Moreover, we have entered into a long-term, 25 years contract withSovkomflot which is a Russian maritime shipping company specializing in petro- leum and LNG shipping. The large scope of activity in the Prirazlomnoye field needs the corresponding scope of envi- ronmental protection measures andLamor meets our increasingly high de-mands for OSR equipment. I feel Lamorand its equipment portfolio is the world leader in this area and a reliable partnerwith a sound reputation,? Vasetchkii notes.Scope of supplyLamor?s scope of supply includes an 19m long oil recovery vessel with the built-in oil recovery system LORS on both sides. ?In addition to oil recovery, our vessel can also be used as a multi- purpose vessel for boom deployment, dispersant spraying, service tasks and asa safety patrol boat,? explains Lamor?s Nikolai Kildishov, VP Russia & CIS. Kildishov highlights some of the ves- sel?s benefits: ?The vessel has hull mounted brush skimmers, which enablesrecovered oil to be delivered directly to the recovered oil storage tanks in the mid-ship without the need of using oiltransfer pumps. Another great advantage is that the brush conveyors are in direct connection with the oil on the water sur- face which notably improves the high viscous oil and debris collection capabil-ities, but also collecting of light oils in Arctic conditions. Moreover, the vessel is built according to ice class Ice 2 and cer- tified by the Russian Maritime Register of Shipping (RMRS).? In addition to the oil recovery vessel, Lamor will also deliver two Landing Crafts LC9000 with cabins, which alsoare certified by RMRS, and a rubber in- flatable boat as well as Bow Collectors to be fitted on already existing workboats. ?We also provided four kms of oil con- tainment booms and a boom washing ma- chine,? says Kildishov. September 2012 marinelink.com23Lamor Oil Storage Tanks, delivered to Gazprom Neft Shelf. Photos: LAMOR CorporationMR#9 (18-25):MR Template 9/11/2012 1:43 PM Page 23