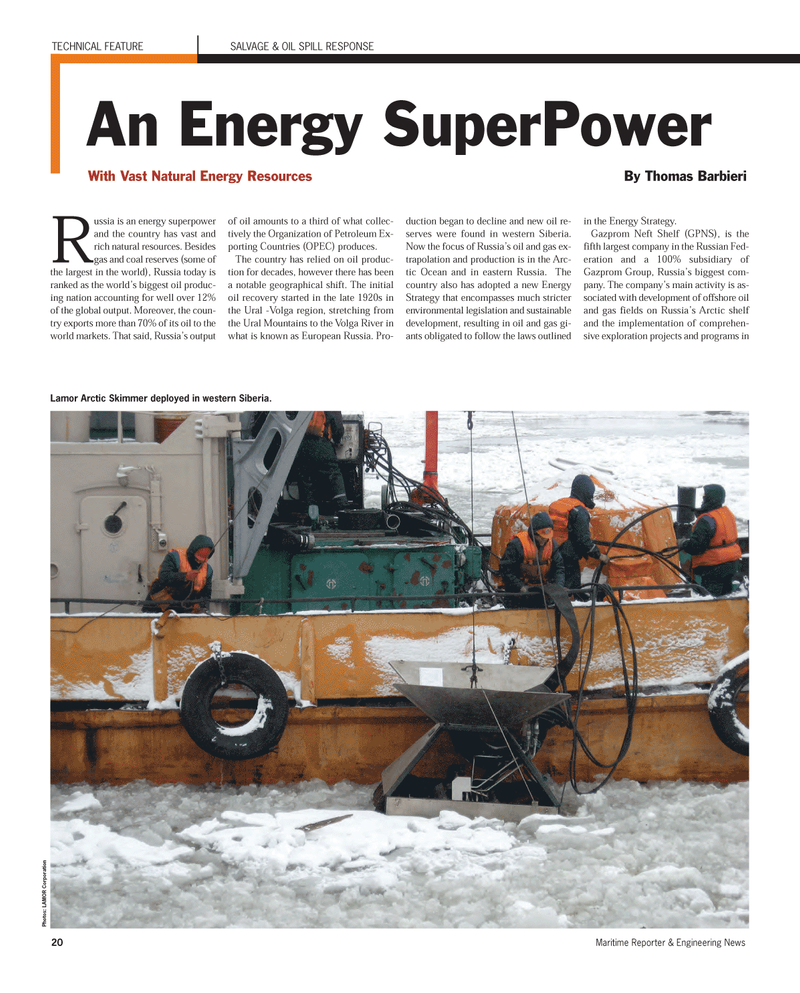 20Maritime Reporter & Engineering News Russia is an energy superpower and the country has vast and rich natural resources. Besidesgas and coal reserves (some of the largest in the world), Russia today is ranked as the world?s biggest oil produc- ing nation accounting for well over 12% of the global output. Moreover, the coun- try exports more than 70% of its oil to the world markets. That said, Russia?s output of oil amounts to a third of what collec-tively the Organization of Petroleum Ex- porting Countries (OPEC) produces.The country has relied on oil produc-tion for decades, however there has been a notable geographical shift. The initial oil recovery started in the late 1920s in the Ural -Volga region, stretching from the Ural Mountains to the Volga River in what is known as European Russia. Pro- duction began to decline and new oil re- serves were found in western Siberia. Now the focus of Russia?s oil and gas ex- trapolation and production is in the Arc- tic Ocean and in eastern Russia. The country also has adopted a new Energy Strategy that encompasses much stricter environmental legislation and sustainable development, resulting in oil and gas gi- ants obligated to follow the laws outlined in the Energy Strategy. Gazprom Neft Shelf (GPNS), is thefifth largest company in the Russian Fed- eration and a 100% subsidiary ofGazprom Group, Russia?s biggest com- pany. The company?s main activity is as- sociated with development of offshore oil and gas fields on Russia?s Arctic shelf and the implementation of comprehen-sive exploration projects and programs in TECHNICAL FEATURE SALVAGE & OIL SPILL RESPONSE An Energy SuperPower With Vast Natural Energy Resources By Thomas BarbieriLamor Arctic Skimmer deployed in western Siberia. Photos: LAMOR CorporationMR#9 (18-25):MR Template 9/11/2012 1:48 PM Page 20