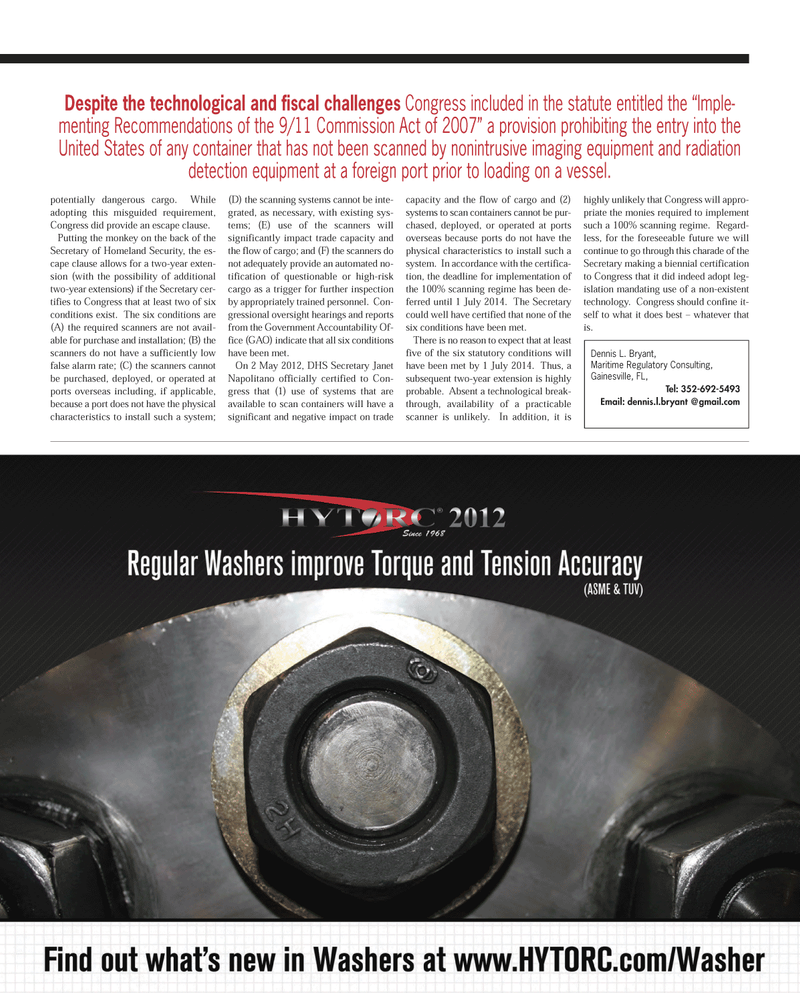 potentially dangerous cargo. While adopting this misguided requirement,Congress did provide an escape clause. Putting the monkey on the back of the Secretary of Homeland Security, the es- cape clause allows for a two-year exten- sion (with the possibility of additionaltwo-year extensions) if the Secretary cer- tifies to Congress that at least two of six conditions exist. The six conditions are (A) the required scanners are not avail- able for purchase and installation; (B) thescanners do not have a sufficiently low false alarm rate; (C) the scanners cannot be purchased, deployed, or operated at ports overseas including, if applicable, because a port does not have the physical characteristics to install such a system;(D) the scanning systems cannot be inte-grated, as necessary, with existing sys- tems; (E) use of the scanners willsignificantly impact trade capacity and the flow of cargo; and (F) the scanners do not adequately provide an automated no- tification of questionable or high-risk cargo as a trigger for further inspection by appropriately trained personnel. Con-gressional oversight hearings and reports from the Government Accountability Of- fice (GAO) indicate that all six conditions have been met. On 2 May 2012, DHS Secretary JanetNapolitano officially certified to Con- gress that (1) use of systems that areavailable to scan containers will have a significant and negative impact on trade capacity and the flow of cargo and (2) systems to scan containers cannot be pur- chased, deployed, or operated at ports overseas because ports do not have the physical characteristics to install such a system. In accordance with the certifica- tion, the deadline for implementation ofthe 100% scanning regime has been de- ferred until 1 July 2014. The Secretary could well have certified that none of the six conditions have been met. There is no reason to expect that at least five of the six statutory conditions will have been met by 1 July 2014. Thus, a subsequent two-year extension is highly probable. Absent a technological break- through, availability of a practicable scanner is unlikely. In addition, it is highly unlikely that Congress will appro- priate the monies required to implementsuch a 100% scanning regime. Regard- less, for the foreseeable future we willcontinue to go through this charade of theSecretary making a biennial certification to Congress that it did indeed adopt leg- islation mandating use of a non-existent technology. Congress should confine it- self to what it does best ? whatever that is.Dennis L. Bryant, Maritime Regulatory Consulting,Gainesville, FL, Tel: 352-692-5493 Email: dennis.l.bryant @gmail.com Despite the technological and fiscal challengesCongress included in the statute entitled the ?Imple- menting Recommendations of the 9/11 Commission Act of 2007? a provision prohibiting the entry into the United States of any container that has not been scanned by nonintrusive imaging equipment and radiationdetection equipment at a foreign port prior to loading on a vessel. MR#9 (18-25):MR Template 9/11/2012 1:37 PM Page 19