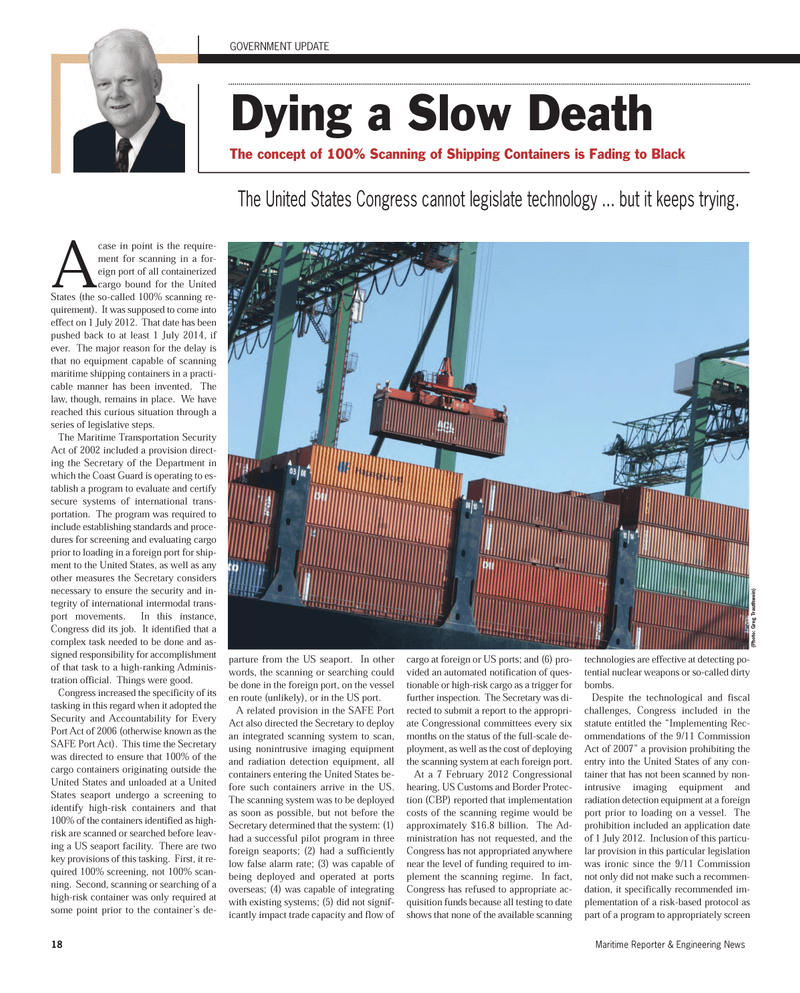 18Maritime Reporter & Engineering News Acase in point is the require-ment for scanning in a for- eign port of all containerizedcargo bound for the United States (the so-called 100% scanning re-quirement). It was supposed to come into effect on 1 July 2012. That date has been pushed back to at least 1 July 2014, ifever. The major reason for the delay is that no equipment capable of scanningmaritime shipping containers in a practi-cable manner has been invented. The law, though, remains in place. We have reached this curious situation through aseries of legislative steps. The Maritime Transportation Security Act of 2002 included a provision direct- ing the Secretary of the Department inwhich the Coast Guard is operating to es-tablish a program to evaluate and certify secure systems of international trans-portation. The program was required to include establishing standards and proce-dures for screening and evaluating cargo prior to loading in a foreign port for ship-ment to the United States, as well as any other measures the Secretary considersnecessary to ensure the security and in-tegrity of international intermodal trans- port movements. In this instance, Congress did its job. It identified that a complex task needed to be done and as- signed responsibility for accomplishmentof that task to a high-ranking Adminis- tration official. Things were good. Congress increased the specificity of its tasking in this regard when it adopted the Security and Accountability for Every Port Act of 2006 (otherwise known as the SAFE Port Act). This time the Secretary was directed to ensure that 100% of the cargo containers originating outside the United States and unloaded at a UnitedStates seaport undergo a screening to identify high-risk containers and that100% of the containers identified as high- risk are scanned or searched before leav- ing a US seaport facility. There are two key provisions of this tasking. First, it re- quired 100% screening, not 100% scan-ning. Second, scanning or searching of ahigh-risk container was only required at some point prior to the container?s de- parture from the US seaport. In otherwords, the scanning or searching could be done in the foreign port, on the vessel en route (unlikely), or in the US port. A related provision in the SAFE Port Act also directed the Secretary to deploy an integrated scanning system to scan, using nonintrusive imaging equipment and radiation detection equipment, allcontainers entering the United States be-fore such containers arrive in the US. The scanning system was to be deployed as soon as possible, but not before the Secretary determined that the system: (1)had a successful pilot program in threeforeign seaports; (2) had a sufficiently low false alarm rate; (3) was capable of being deployed and operated at ports overseas; (4) was capable of integrating with existing systems; (5) did not signif- icantly impact trade capacity and flow of cargo at foreign or US ports; and (6) pro- vided an automated notification of ques- tionable or high-risk cargo as a trigger for further inspection. The Secretary was di- rected to submit a report to the appropri-ate Congressional committees every six months on the status of the full-scale de-ployment, as well as the cost of deploying the scanning system at each foreign port. At a 7 February 2012 Congressionalhearing, US Customs and Border Protec-tion (CBP) reported that implementationcosts of the scanning regime would be approximately $16.8 billion. The Ad- ministration has not requested, and theCongress has not appropriated anywhere near the level of funding required to im- plement the scanning regime. In fact, Congress has refused to appropriate ac-quisition funds because all testing to dateshows that none of the available scanning technologies are effective at detecting po- tential nuclear weapons or so-called dirtybombs.Despite the technological and fiscal challenges, Congress included in thestatute entitled the ?Implementing Rec-ommendations of the 9/11 CommissionAct of 2007? a provision prohibiting the entry into the United States of any con- tainer that has not been scanned by non-intrusive imaging equipment and radiation detection equipment at a foreignport prior to loading on a vessel. The prohibition included an application dateof 1 July 2012. Inclusion of this particu- lar provision in this particular legislation was ironic since the 9/11 Commission not only did not make such a recommen- dation, it specifically recommended im- plementation of a risk-based protocol aspart of a program to appropriately screenGOVERNMENT UPDATE Dying a Slow DeathThe concept of 100% Scanning of Shipping Containers is Fading to BlackThe United States Congress cannot legislate technology ... but it keeps trying. (Photo: Greg Trauthwein) MR#9 (18-25):MR Template 9/11/2012 1:36 PM Page 18