On the occasion of the SMM 2004 exhibition in Hamburg last month. MR had the opportunity to speak with Wdrtsilci's President and CEO Ole Johansson to discuss conditions in the international maritime market.

— By Greg Trauthwein Challenges facing today's corporate manufacturing leaders — particularly those in the marine propulsion segment — are diverse and seemingly ever changing. Faced daily with a burgeoning list of technical, political, and social issues, survival for the long run seemingly depends on building and maintaining a strong organization while balancing the quickening and irreversible shift of manufacturing from the West to the Far East; the ubiquitous and ever-tightening environmental regulation; and the shipowner's demand for increased reliability.

In a nutshell, Ole Johansson is a busy man.

Balanced with these challenges: the marine industry is embarked on a historic high. "It is a surprisingly good market ... you can feel it." said Johansson.

While 'feel' is subjective, this euphoria is backed with solid numbers, as he reported in the company's 2003 Annual Report: "The year 2003 will remain one of the most active in the history of the shipbuilding industry: the world's shipyards took in orders for more than 1,800 (vs. 1,100 the previous year) new vessels representing 108 (vs. 52) million dwt." Charged to oversee and lead Wartsila - a company with 12.000 employees and 2003 net sales exceeding 2.3 billion Euro — Johansson has been embarked to streamline the organization, postioning it as "The Ship Power Supplier", a literal one-stop-shop for marine power needs.

Bringing this strategy to fruition required several key acquisitions over the past decade, starting with the merger of New Sulzer Diesel, which allowed the company to extend its reach into the slow speed diesel engine market.

"Stepping into the low speed end of the engine market was a major piece of making Wartsila a major player in the major market." Johansson said. While he admits that the company still has much work ahead in its effort to gain market share, it is clear that this corporate integration, along w ith the purchase of John Crane Lips, helped to broaden Wartsila from an engine maker and embarked it upon the road leading to single source system provider.

While the path may be clear, the journey is not without pitfalls.

Heading East ... Far East The trend of manufacturing operations migrating from Europe to the Far East is hardly new or confined to the the shipbuilding industry. However, as shipyards in China make technological leaps, the pace will surely quicken as the country, combined with traditional powers in Japan and Korea, continue to sap business from the west. While Johansson acknowledges the sound business principles for setting up shop in China, he views the migration of manufacturing with a certain amount of trepidation.

"We have a very proud tradition of engineering, and 1 see this trend (of manufacturing moving from Europe) as irreversible." he said. While necessary to keep the corporation functional and profitable, he counts the need to close factories, which inflicts much personal hardship, as the least favorite aspect of his position. Nevertheless, Johansson is committed to ensuring that Wartsila is the single source technological and service leader, and is bound to implement a production strategy which delivers to the company's customers where ever they may be found.

Wartsila-CME Zhenjiang Propeller Co. Ltd. will produce Lips- and Kaidabrand FPPs initially up to a weight of 75 tons but this will be increased to conform market requirement as production equipment is upgraded. Production volume will start at around 1,000 tons of propellers a year, growing gradually to an estimated 4.000 tons after 10 years.

In addition, Wartsila looks for opportunities to start other propulsor related production and works to explore the construction of smaller, high volume genset engines in China.

All in One The trend toward corporate consolidation is well established over the past decade, and is evident across the broad spectrum of manufacturing and service entities around the world. As Wartsila has gotten larger, so too has its clients.

"Large shipowners continue getting larger. Where as we used to discuss engines for one or two ships, we are now discussing engines for 10 or 12," said Johansson.

As owner's fleets get larger, so to does the need for uniformity, which offers obvious life-cycle benefits on the maintenance and technical sides. Johansson maintains that shipowners today are more prone to enter discussions for the larger, integrated package, and while the company is structured to provide an all in one solution, it is flexible to meet most any demand.

We basically have two types of customers, he explained. The first are shipyards that have strong engineering staffs, and have a long track record of pride and reputation. This customer is more likely to buy individual components and integrate them at the shipyard.

The other type of customer are newer shipyards with less experience, hence they have less established trust with the owners.

In this case, the integrated solution is attractive, as it lessens demands on the yard while inspiring a confidence within the shipowner. 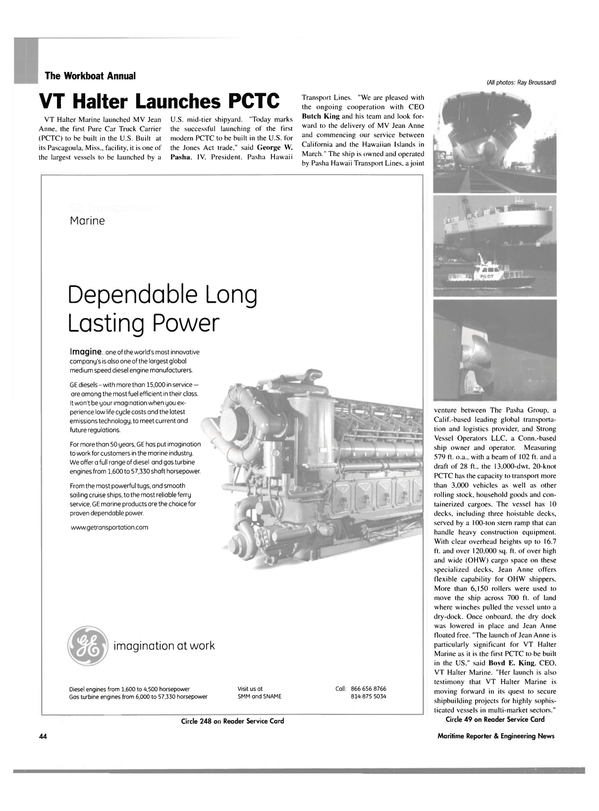