designed primarily for working over the bow. This tug is a powerful 4.200 kW vessel that develops a bollard pull of around 70.000 kg; full ahead to full astern in a ship's length, turning around in 10 seconds.

With the introduction of the Damen ASD Tug 2411. Damen Shipyards has put a new type of port tug on the market: very compact, with an enormous bollard pull. The prototype of this boat (yard number 512201) was built at Damen Shipyards Changde in China for stock and as a demonstration model, but before delivery the boat was sold to an Australian shipping company and named Barunga. The delivery to Adsteam Towage Pty Limited in Bondi Junction, New South Wales, took place on January 23. and Barunga is now based in Port Adelaide.

Make some suggestions." This was more or less the question the Damen Sales team put to the Tugs & Workboats Product Group almost three years ago. It was a new product, at least for Damen. Initial sketches showed a wide, short and low. with a very big approach angle to enable it to creep as far under a ship as possible, and with virtually no accommodation and an excellent view all round.

The company had long meetings and made many changes. And the boat grew.

That's how it happens with Damen Standard designs. It's always about the customer and what for what use they need a Standard Damen product.

The need for a new type of vessel was the result of developments in the market.

Competition for port tug work is usually stiff, which led to an increasing demand for vessels that were lower cost but still packed a considerable bollard pull.

The Damen ASD Tug 2411 design based on this program of requirements has the following main specifications and trial results of yard no. 512201 Barunga: The beam dimension was chosen to comply with the U.S. Coast Guard requirements for ASD Tug stability (among the most stringent in the market) and this makes the boat relatively wide.

The resulting metacentre height is 2.3 m. With full tanks, freeboard is 1.1 m.

Engine Room Design The hull of the Damen ASD Tug 2411 is divided by four watertight bulkheads into the following compartments: • Forepeak, dry.

• Forward compartment with the potable water tank below, a cofferdam and two fuel tanks, one on each side of the centreline (port and starboard), that run through into the engine room. Above the tanks are the auxiliary engine room on the starboard side and the cable storage area on the port side: at the front of this compartment there are also the chain lockers and, between them, the laundry unit, a workbench, hydraulic tank unit, main switchboard, boiler and hydrophore. At the rear are two F.O.

header tanks for fuel, each of 3.4 m3 capacity.

• Engine room, with the two fuel tanks mentioned above either side of the centreline on the floor, and behind them the liquid foam tank and a dispersant tank (starboard) as well as the sewage tank (port) and then two more fuel tanks (port and starboard): the latter each have a trunk on the centreline leading up to the main deck. There are several other tanks behind the box coolers at the sides of the engine room: on the starboard side the lube oil tank for the main engines and behind it the bilge water tank; on the port side the dirty oil tank and the lube oil tank for the auxiliary engines. 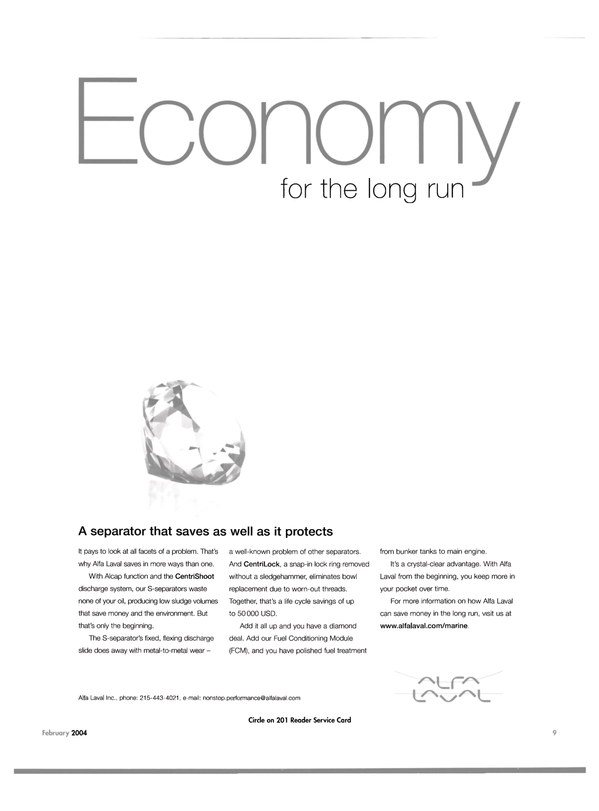