Odfjell's consolidated net result after tax was $11 million for the first nine months 2003 compared to $31 million in the same period 2002. The 2003 figure is after net extraordinary expenses of $49 million, including a fine from the US Department of Justice of $42.5 million and other costs directly related to this issue.

Operating expenses as well as general and administrative expenses were higher than in the same period 2002, mainly due to a weaker U.S. dollar.

On August 1, 2003, the company took delivery of the 39,900-dwt newbuilding M/T Bow Sun from Stocznia Szczecinska Nowa in Poland. Bow Sun is the first ship in a series of six to eight newbuildings from the Polish yard. Late September 2003 the company entered into agreements with Japanese interests for the long-term time-charter of two 30,000-dwt newbuildings. The ships will be built at Kitanihon Shipyard in Japan with deliveries in August 2005 and May 2006 respectively.

The initial time-charter period is nine years with the company's options to extend the charters another two or three years. Furthermore, the company has purchase options for the ships throughout the charter period. The ships will have 28 cargo tanks, all made of stainless steel. In August 2003, Odfjell signed an agreement with Christian F.

Ahrenkiel GmbH & Co. KG of Hamburg, Germany, to establish a 50/50 joint-venture for marketing and operation of chemical tankers in inter- European trade. The plan is for the jointventure to become operational by yearend 2003. 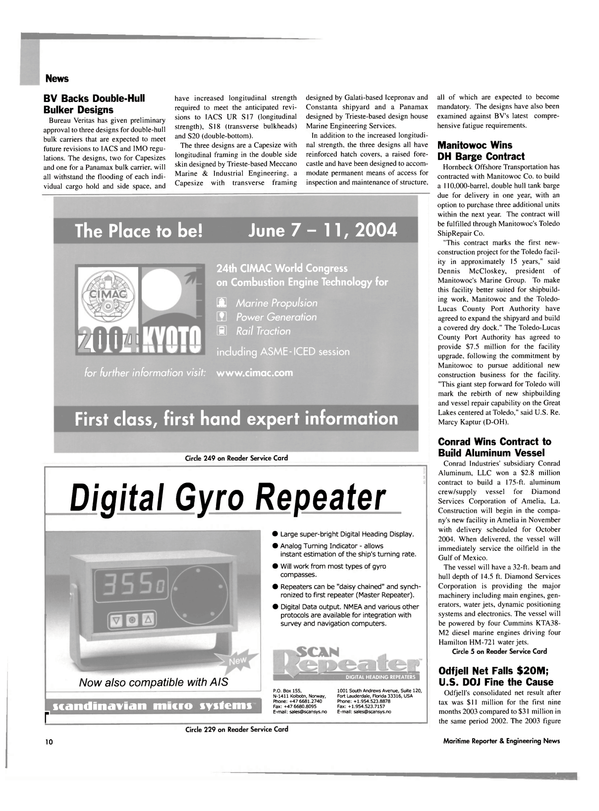 Other stories from December 2003 issue