Imagine having your picture taken as soon as you board any cruise vessel.

While cruise lines have been observing this practice for many years for entertainment purposes, a new kind of photo has since come into play — the high speed interactive photo I.D. Developed by Security Identification Systems Corporation (SISCO), A-Pass (Automated Personnel Assisted Security Screening), provides a picture of each guest — even before boarding the ship — via a kiosk that stores each passengers photo upon insertion of their boarding card. Everyone who boards, even ships' officers are required to observe this practice, which was presented before a Senate Subcommittee on Capitol Hill on January 9.

By Regina P. Ciardiello, managing editor The A-Pass, which had already been installed onboard vessels belonging to major cruise lines prior to the terrorist attacks of September 11, has proven to be a vital tool not only for security purposes, but also to ensure that everyone onboard is accounted for before the vessel enters and departs each port. The system, which allows ships' personnel to monitor who gets on and off the ship, also records how many times each person leaves and enters the vessel. Gone are the days where passengers could just flash their photo I.D. such as a driver's license and would be waved through by ship's security personnel. In fact, this "soft" procedure is one that drew SISCO's president, Anthony Zagami to the development of A-Pass and its function when he observed a firsthand account of just how onboard security was handled. "Security was always taken lightly," Zagami said. "Now because of the recent events that occurred (September 11), the government is taking a full-fledged stand on security and is taking every threat seriously." Zagami, who, when vacationing on a cruise with his wife in 1994, saw how easy the boarding process was, decided to come out of retirement to develop SISCO, the West Palm Beach, Fla. security company that he has headed since 1996. No stranger to the industry, as he had headed a security company for 25 years in New York prior to retiring, Zagami, who also worked for Lockheed Martin in its aerospace division, wanted to develop a product, that was cruise specific and that would record real-time data for not only the cruise line itself, but also for the government agencies.

Another benefit besides its function as a tracking device is that it can detect if someone is missing from the ship -— a problem that has plagued cruise lines over the years. According to Zagami, ship officers can present the photo that is filed in the kiosk to law enforcement and government agencies as a search aid when trying to locate missing or injured passengers.

Another function that A-Pass offers is the ability to keep stowaways and fugitives from the law from boarding the vessel. Zagami said that with A-Pass, unauthorized persons would not be able to board the ship illegally; if they attempted to do so, the mismatched photo that is produced via the kiosk will appear.

The system is also being used by U.S. Customs to conduct background checks on every passenger who boards the ship.

Approximately one half hour after the vessel departs, a manifest, is sent to Customs agencies to determine if there are indeed any questionable or suspicious individuals onboard that officers should be made aware of. Sometimes however, onboard security personnel can tell right away — even before the manifest comes back from customs if there are people of a suspicious nature onboard. Case in point would be the recent problems that Carnival Corp. had with passengers trying to bring jars of bees onboard Carnival Sensation. According to Zagami, if A-Pass tracks that someone is getting on and off the ship several times in a short amount of time, it will more than likely raise the eyebrows of security officers.

Selling it to the Senate Zagami was invited by Steve Nielsen, vice president, Caribbean and Atlantic, Princess Cruises, to testify before a Senate Subcommittee on Commerce, Science and Transportation at a Field Hearing on Seaport Security and Ship Passenger Security on January 9 on Capitol Hill. Zagami, who along with Ted Thompson, executive vice president of ICCL, spoke before the Surface Transportation and Merchant Marine Subcommittee, discussed the cruise industry's proclivity in developing increased passenger safety. Zagami explained to the Senators — specifically hearing chairman Sen. John Breaux (D-La.) — the need for A-Pass to be mandatory on all cruise lines, not just those governed by ICCL. "The Senators knew that certain security measures were in place, but never had the opportunity to see it in operation," Zagami said. "The overall response by Senator Breaux and the rest of the Subcommittee was a favorable one." With ICCL-member line Princess the first cruise line to implement the A-Pass system in 1996, ICCL's executive V.P Thompson appeared before the subcommittee reiterating further the Association's ongoing pledge to address security and safety issues onboard cruise vessels, and was quick to mention that all of the Association's member lines have established and benefited greatly from the A-Pass system. "As the need arises, we continue to jointly address matters impacting both ship operations and security," Thompson said. "We are committed to providing the highest levels of security for our passengers and working with appropriate federal agencies to address additional security measures that may become necessary." SISCO Gets Smart As security gets tighter and technology is further developed, more money will be spent on the ports, which according to Zagami will eventually boast the same type of security check-in process similar to airports. "These are not isolated incidents (terrorist attacks) anymore," Zagami said.

"The U.S. had a wake up call on September 11, and while 1 don't think there will be another hijacking, we have to limit access to ports - many of which handle dangerous materials such as petroleum and propane. We need to be more proactive in securing ports — and doing it electronically." Therefore Zagami and the SISCO team are currently developing a system that takes A-Pass to the next level — the Smart Card. The device, which like the A-Pass stores vital information on each passenger, will add an additional layer of security — biometrics. When passengers board the vessel. Smart Card will snap their picture and will also entail each person to place their finger on the kiosk to record a fingerprint, making it even more difficult for fraud to occur. Zagami hopes that this level of security will not only be present within the maritime industry, but the airline industry as well. His ultimate goal — that it will even by adopted by U.S. Customs to replace the traditional passport.

"Smart Card is currently being discussed on various levels for both the maritime and airline industries," Zagami said. "This type of information (biometrics) is very fast and accurate," Zagami said. "Most of all, however, it is almost impossible to duplicate." Circle 7 7 on Reader Service C a rd w w w . m a r i t i m e r e p o r t e r i n f o . c om 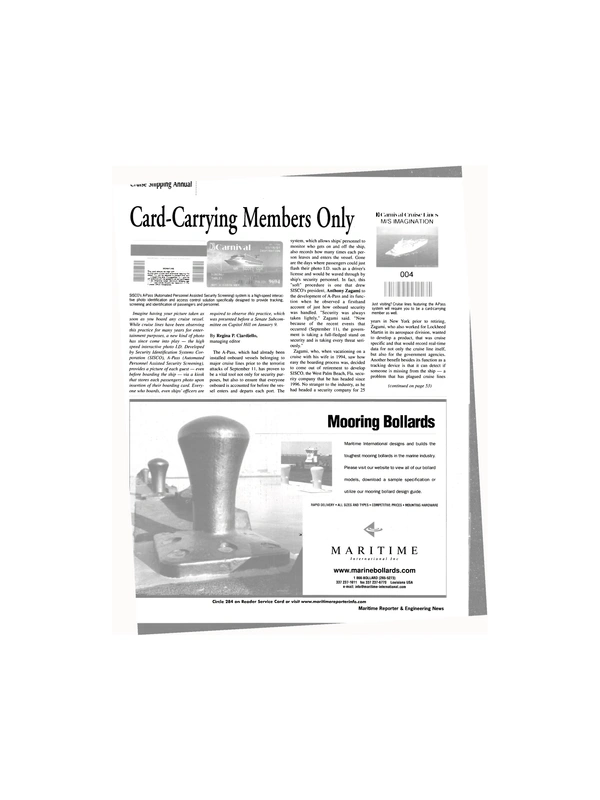