A member of the Wagenborg trio, MV Spaarneborg Slingewas constructed at German shipyard Flender Werft as part of a key component within a new transport system developed by forestry product company Stora Enso.

Modeled after a new intermodal project, the vessel, as well as its two sisterships measures 600 x 82 x 49 ft.

Cruising at spfeeds of 18 knots, Spaarneborg, as well as its additional fleet members - Schieborg and Slinge- borg — will run between the Gothenburg to Zeebrugge route.

The SECUs can hold up to 70 tons of cargo, where they will be stowed on the lower hold, main deck and part of the weather deck via a translifter. Benefiting the most from this revolution are transportational outlets, specifically the coordination between Sweden's rail network, North Sea traffic and Europe's inland water- ways.

Dutch shipping company, Wagenborg Scheepvaart, the benefactor of these Netherlands-flagged vessels, is chartering the trio to Belgium-based Cobelfret Ferries N.V. Noteworthy of their single-propeller driven power, the Bureau Veritas classed RoRos are equipped with a low speed crosshead diesel engine (7RTA 52 U) type with an output of 10,920 kW at 135-rpm. The engine plant's foreship location frees up the cargo holds from internals, mainly engine casings, which might block the cargo intake. Holds have been squared off for utmost use of cargo decks. In addition to transporting Storaboxes, the vessels can carry trailers, trucks, containers, private cars and general cargo.

Touted as environmentally-friendly, the low fuel consumption, high cargo capacity vessels' propulsion machinery will burn low-sulphur heavy oil, while their plants will be equipped with exhaust emission treat- ment units. Electrical supply is granted through two auxiliary diesel generators and one shaft generator having a total capacity of 3,360 kW. A special rudder operating 70 degrees to both sides, in addition to two bowthrusters, and one stern thruster, allows Spaarneborg to perform non-tug assisted maneuvers. 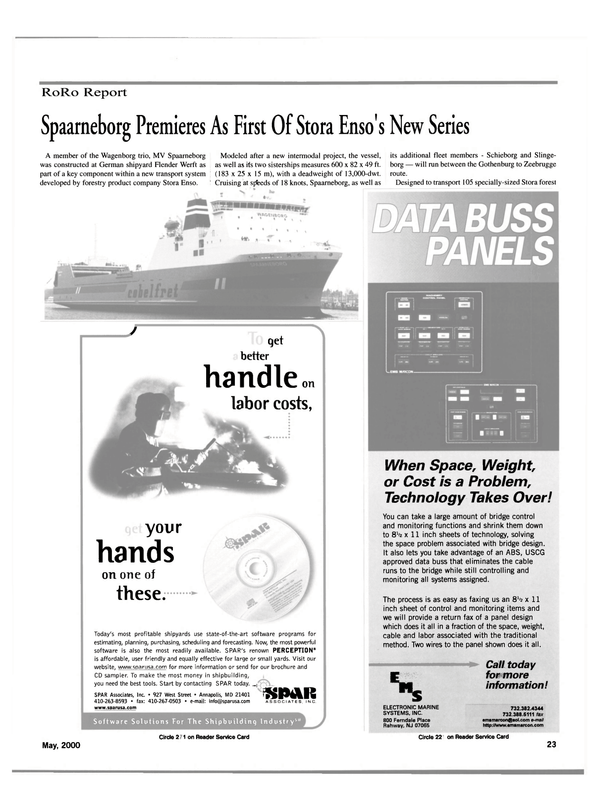 Read Spaarneborg Premieres As First Of Stora Enso's New Series in Pdf, Flash or Html5 edition of May 2000 Maritime Reporter