—Color Brochure, Technical Paper Offered— NautiCan Enterprises, Ltd., North Vancouver, B.C., Canada, claims to have made a significant breakthrough in nozzle design more than 50 years after the development of the original Kort nozzle in Germany.

The outline of the Kort nozzle has become familiar to operators of towboats, fishboats, supply vessels and other workboats over the years. The inside of the Kort nozzle is shaped like a venturi tube, flared entry, cylindrical section usually made of stainless steel at the propeller plane and a cylindrical or cone section on the nozzle exit. Its leading and trailing edges are made from the pipe or the solid round. The exterior of the nozzle is always a cone.

After carrying out extensive tests on various nozzle configurations, Josip Gruzling, marine engineer, NautiCan Enterprises Ltd., decided that if one could design a nozzle with an airfoil shape that had extremely low drag, then it would be possible to increase the efficiency of any vessel.

The new NautiCan nozzle has a continuous curvature of its inside and outside surfaces, similar to the wing section of an advanced aircraft.

Unlike the conventional nozzle which is circular, the new nozzle is actually a 36-sided polygon.

NautiCan Enterprises claims that by adapting the advanced theory of the wing section to the original nozzle design, the newly developed nozzle not only improves thrust at lower speeds but also increases the freerunning speed of a vessel.

According to company literature, the superior performance of the NautiCan nozzle was achieved with the use of a more efficient airfoil section. Model tests performed at the Vienna Ship Model Basin showed that the NautiCan nozzle has 17 times less drag than an industrial standard 19A type nozzle.

There was no flow separation observed on either the inside surface or outside surface of the NautiCan nozzle. The model test also showed a 12 percent better efficiency over the open propeller at higher speeds.

In the instance where a NautiCan nozzle was used to replace an existing Kort nozzle, the measured bollard pull increased from 20,000 pounds to 23,000 pounds. Free running speed of the vessel was increased by three-quarters of a knot.

With the use of an advanced propeller design in place of the conventional Kaplan propeller, there was a significant reduction in vibration and noise.

The NautiCan nozzle is fabricated out of a number of small segments, each of which resembles a section of an aircraft wing. The inside surface of the nozzle is made entirely of stainless steel.

The nozzles and propellers were incorporated into Ulstein Maritime Z-Drive units and supplied to the U.S. Navy.

To date, NautiCan Enterprises has received orders for 11 nozzles for the U.S. Navy's torpedo weapons retrievers (TWRs), as well as over a dozen installations aboard tugs and fishing vessels. A survey vessel, the GSI Explorer, operated by Geophysical Services Ltd., is fitted with three of the nozzles.

According to a paper, "Advanced Nozzle/Propeller Development," presented by Mr. Gruzling at the Society of Naval Architects and Marine Engineers (SNAME)-Pacific Northwest Section's spring meeting last year, the full potential of the nozzles will be realized only when they are applied to vessels operating at higher speeds. Improved flow over the nozzle section opens possibilities for quieter running propellers for military applications and seismic research vessels and passenger vessels.

For a free copies of the technical paper and a full-color brochure detailing the features and advantages of the NautiCan nozzle, C i r c l e 9 4 on Reader Service Card 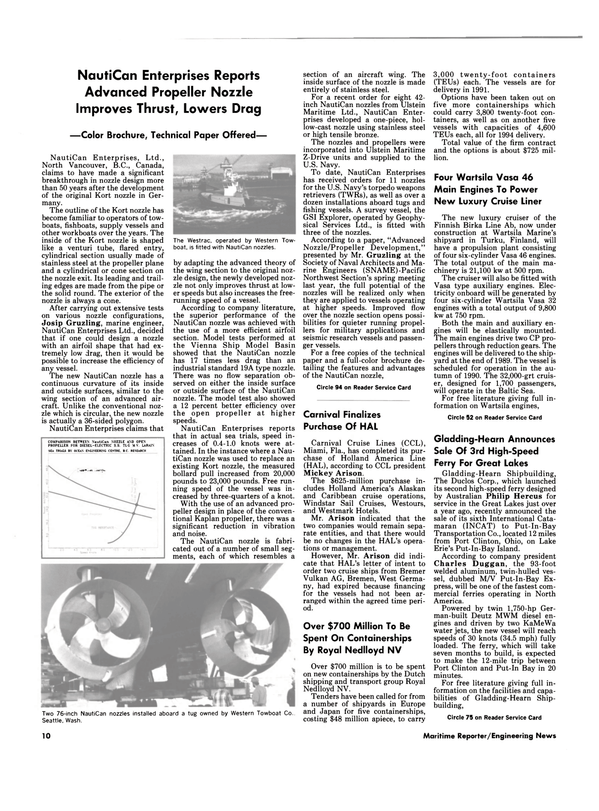