Commuter Boat To Operate Between Kennedy Airport And Manhattan The Avondale Boat Division, New Orleans, La., of Avondale Industries, Inc., has received an order for a high-speed 400-passenger Surface- Effect-Ship (SES) catamaran that will be operated by Tri-State Marine Transport, Inc., in New York City commuter service between Kennedy Airport and downtown Manhattan.

Expected to enter into service this spring, the 109-foot "Air Ride" passenger ferry, with a beam of 34 feet, designed by Air Craft, Inc., will travel at speeds between 40 to 50 knots, dramatically reducing commuting time between downtown and the airport.

The SES passenger ferry will be powered by two 16-cylinder Deutz MWM 604B series diesel engines, each rated at 2,253 hp at 1,800 rpm, fitted to KaMeWa waterjets.

A Surface-Effect-Ship is an airsupported craft with catamaran-like sidewalls, in which the volume of air between the hulls is trapped with flexible bow and stern seals. This trapped air is then pressurized, providing a lift force on the entire hull.

The effect is that, with the reduced drag between the boat and the water, the vessel can provide more speed with the same amount of power.

The state-of-the-art "Air Ride" ferry will have two decks with bar and buffet facilities and will be fitted with extensive noise reduction systems for passenger comfort. 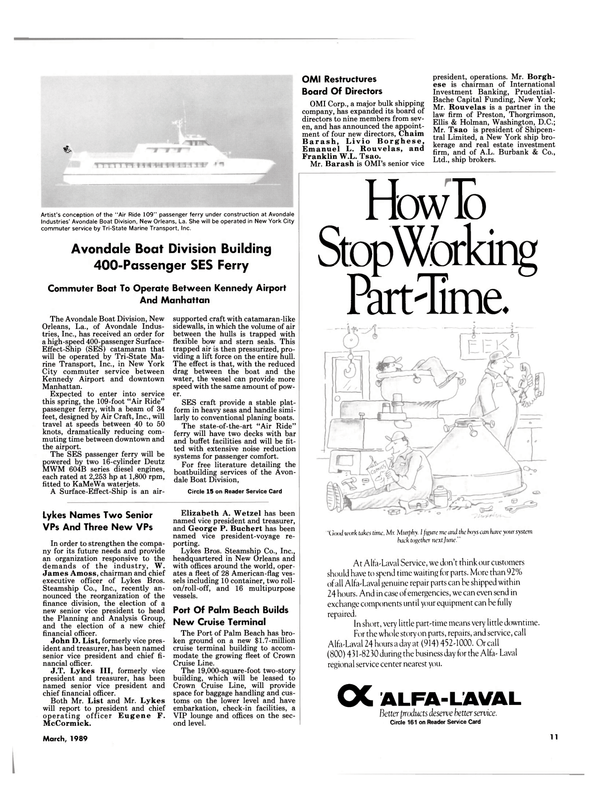