The Annual Meeting and Spring Convention of the American Waterways Operators (AWO) will be held April 6-7, 1989, at the Washington Court Hotel, Washington, D.C.

Hundreds of AWO members will attend the meeting for the election of association officers and for close interaction with decision-makers in Washington.

This year, the annual meeting and spring convention is comprised of a full agenda of business and social events. On Thursday, April 6, AWO Committees meet in morning and early afternoon sessions to discuss and debate key industry issues.

These meetings include the following committees: Regulatory; Legislative; Public Affairs; Corps of Engineers Liaison; and Health, Safety and Training. AWO emphasizes that attendees do not have to be members of the respective committees in order to participate in the meetings. On Thursday afternoon, AWO will elect its officers and directors for 1989 and, following that meeting, will host a cocktail reception in honor of the Honorable Sam Skinner, the new Secretary of the Department of Transportation.

Friday, April 7, kicks off at a 7:30 a.m. breakfast with an address by Hobart Rowen, chief economics correspondent for The Washington Post. Mr. Rowen is one of the premier economics writers and analysts in the world, and his opinions and projections are closely watched by decision-makers everywhere. He will be providing AWO members with his perspective on the economic outlook under the President Bush.

Following breakfast, the AWO board of directors meeting gets under way with an extremely full agenda including discussions and debate on strengthening and maintaining the Jones Act, a review of new proenvironmental initiatives taken by the tug and barge industry, and discussion of the Department of Transportation's drug testing policy, to name a few key issues.

This 1989 annual meeting and spring convention will provide an excellent opportunity for members to be brought up to date on current issues of the association and to become involved in the efforts of AWO. All directors, designated representatives and alternates, committee members, directors emeritus, American Waterways Shipyards Conference members, and other individuals from AWO member companies are encouraged to attend. 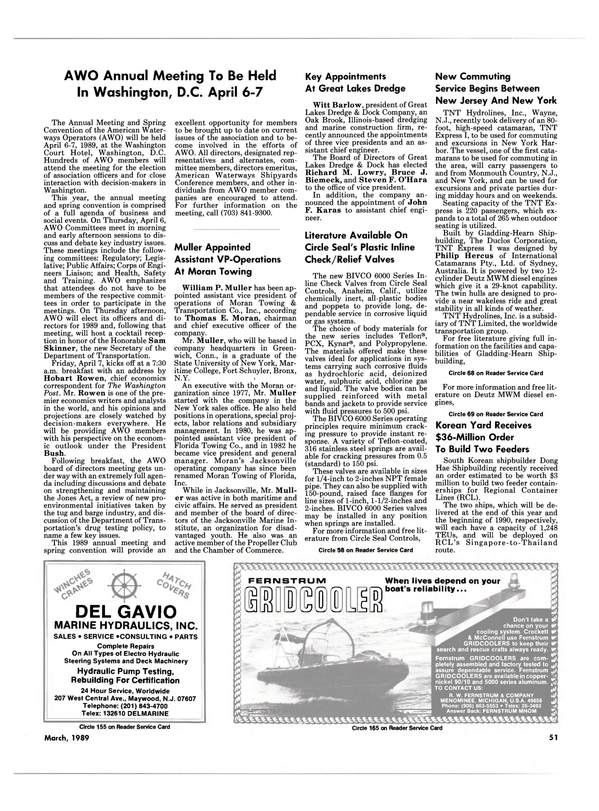