Navy Programs Could Bring C$16 Billion In Work To Shipbuilding & Allied Industries Over Next 15 Years Based on a speech by J.W. Serge Poirier, Director-Procurement & Supply Maritime, Canadian Department of National Defense (DND), at the Canadian Maritime Industries Association (CMIA) and Allied Industries Outlook Conference late last year, the future of Canadian shipbuilding and its allied equipment and support industries appears to be promising. Acquisition of more than 65 percent of total Canadian Forces requirements over the next 15 years can be purchased in Canada. The Navy program over the 15-year period has approximately 40 projects primarily associated with the shipbuilding industry and is valued at approximately C$16 billion. While the majority of the work relates to the shipbuilding sector, large amounts of work will be assigned to the nuclear, electronics, communications, ADP and aerospace industries. It is expected that Canadian shipyards on both coasts, the Great Lakes and St. Lawrence River will participate in the Navy's rebuilding programs.

Mr. Poirier outlined the status of the major maritime projects contained within the Defense White Paper and others that are ongoing within the DND. All of the proposed projects will be competing for the Defense procurement dollars over the next few years. Some of the projects have not yet received departmental or governmental approval.

Each project will be subject to intensive examination to determine need and affordability. This article provides a brief review of the status of these programs.

PROPOSED PROJECTS Nuclear-Powered Submarines The French Rubis/Amethyste Class (SNA-72) and U.K. Trafalgar Class nuclear-powered attack submarine designs are currently under evaluation by Canada. Once the country-of-origin evaluation process has been completed, a technical data package and a technology transfer contract will be purchased.

It is anticipated that once the Request For Proposal (RFP) is issued and replies evaluated, the top two will be awarded project definition studies contracts. The implementation contract is scheduled to be let for late 1991 with the acquisition phase expected to extend until the year 2014. The government plans to spend $6 billion or more to acquire a fleet of 10 to 12 nuclear-powered attack submarines.

The larger, faster Trafalgar Class has a displacement of 5,208 tons, with an overall length of 280.1 feet.

Should the project be implemented, the lead ship of the new ASW frigate class would be delivered in the mid-90s. Construction by the participating nations would follow.

Naval Reserve MCM Project The government has given preliminary approval to the Naval Reserve Mine Countermeasures (MCM) Project and RFPs for project definition have been issued to interested Canadian prime contractors.

After a bid evaluation period, two Canadian prime contractors will be selected to design a Maritime Coastal Defense Vessel (MCDV) for the Naval Reserve that will provide a ship capable of performing both patrol and MCM tasks in Canadian coastal waters. If the current schedule is maintained, the DND will award two project definition contracts in July 1989.

Following an evaluation of the two designs, one contractor will be selected to build 12 coastal defense vessels for delivery between 1993- 1998.

MCM Auxiliaries This project was initiated to provide MCM training to reserves. Two offshore commercial vessels have been acquired and will be fitted with Hyperfix Precise Navigation Systems, side scan sonar, the PINS 9000 Precise Integrated Navigation Systems and with mechanical minesweeping equipment.

The two vessels will require docking, equipment installation and shipwork to bring them to Canadian Coast Guard pollution standards.

The DND will contract engineer support to private industry within the next six months.

Auxiliary Vessel Replacement Project This project is presently in the planning stages. When developed, it will entail the progressive modification and replacement during the 1990s of tugs, cranes and auxiliary barges. This project should generate a great deal of work for Canadian yards.

Under-Ice Fixed Sonar Systems This project involves the installation of a modern, fixed under-ice surveillance system in the Arctic to aid in the detection of incursion of Canadian Arctic waters by submarines.

Departmental officials are in the process of preparing the necessary option analysis and documentation to obtain approval for this project. It is expected that a competitive contract for project definition will be issued in 1989.

Sonar Array Towing Vessels The DND has determined the need for mobile-subsurface long range surveillance systems consisting of towed arrays and up to three towing vessels. This project depends on the development of a suitable sensor to meet the performance requirements.

ONGOING PROJECTS ASW Patrol Frigates The government has approved the second phase of the ship replacement program in the form of six more Canadian patrol frigates to be delivered between 1992-1996.

The design remains essentially the same as that of the first six ships and Saint John Shipbuilding, Ltd., New Brunswick, and Paramax are in the process of placing purchase orders for material for the second batch.

At a total cost of C$10 billion, the CPF is the largest single defense project with annual expenditures now approaching C$1 billion.

Saint John Shipbuilding, the prime contractor for the first six frigates, has christened the first ASW frigate, the HMCS Halifax, and will construct two others.

Marine Industrie Limitee (MIL) of Quebec is building the other three frigates in the first batch.

Under the project, the four Tribal Class destroyers, the Iroquois, Algonquin, Huron and Athabaskan, are being modernized and equipped with new combat systems, gas turbine propulsion engines, diesel generator engines, vertical missile launcher modules and electronics to fulfill the role of air defense, as well as antisubmarine warfare. Each conversion takes approximately 18 months.

At present, the HMCS Iroquois and the HMCS Algonquin are being converted at the MIL Davie Shipyard in Lauzon, Quebec.

Contracts for the second two destroyers will be let by Litton on a competitive basis. The RFP was issued by Litton in 1987 and proposals have been submitted. The evaluation and approval process is proceeding and it is expected that the subcontract will be awarded early this year.

Research & Development This year, the Research and Development Branch of the DND has been allocated C$149 million for R&D contracts and equipment, plus the support needed for research facilities.

These funds will be supplemented by additional monies identified to support international cooperative development as recently stipulated by the U.S. "Nunn Amendment." Coast Guard Projects A number of Canadian Coast Guard major capital projects have been completed, are underway or proposed. See Exhibit 1 for details.

More information will be provided next issue. 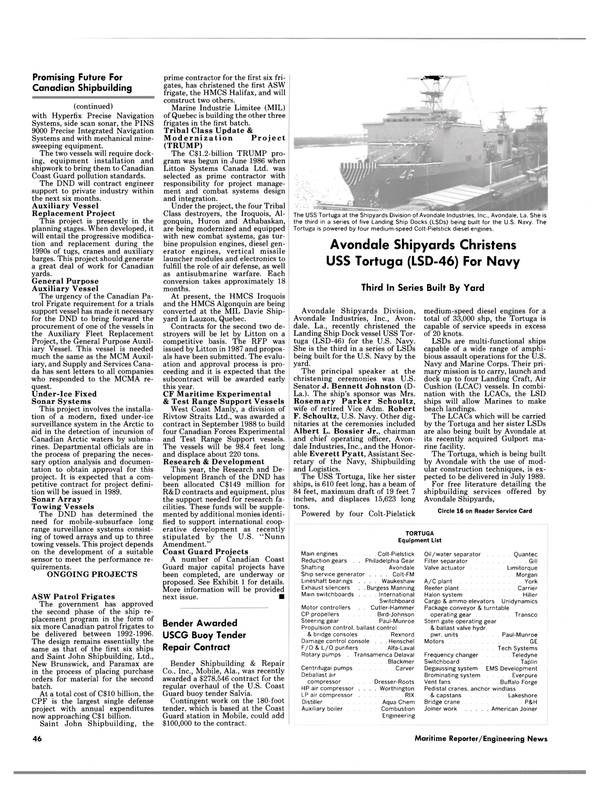 Other stories from February 1989 issue