Steamship Co., and Sea-Land Service— said they will jointly press for legislative and regulatory changes to strengthen the U.S. merchant marine.

"The group will serve as a single focal point for the industry's dealings with Congress and the Administration on all key matters affecting U.S. merchant marine policy," said Timothy J. Rhein, USA's chairman.

"The members are committed to revitalizing an industry that is crucial to both commercial interests and national security, but has long been neglected by government policy makers." Much of USA's strength will come from the fact that its members represent some 95 percent of the U.S.- flag liner capacity serving America's international trade, Mr. Rhein noted.

According to executive vice president Albert E. May, to increase the competitiveness of American carriers, USA will press for reform of the operating differential subsidy program and will participate actively in a review of the Shipping Act of 1984. Other agenda items will include working with unions to develop effective manning programs, advocating more open trading and shipping practices worldwide, and conveying to U.S. Customs and other agencies the needs of the industry and its customers.

Adm. James L. Holloway III, USA (Ret.), who formerly headed the Council of American-Flag Ship Operators, will serve as president of USA until his retirement and a new president is named. A search to fill this position is presently underway.

Admiral Holloway has agreed to remain as a consultant to USA following his retirement from the presidency. 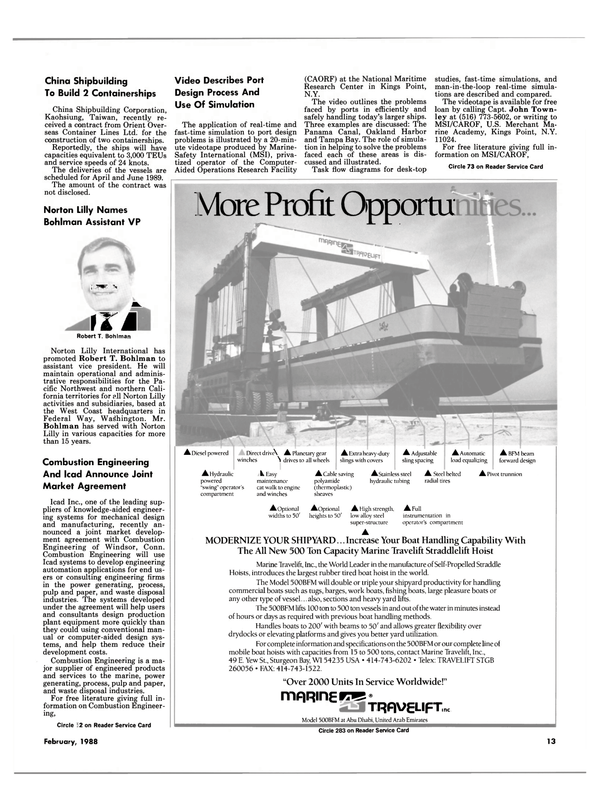