J.Y. Clarke, president of the Canadian Shipbuilding and Ship Repairing Association (CSSRA), recently announced that CSSRA will now be known as the Canadian Maritime Industries Association (CMIA). Eligibility requirements to join have been expanded to include ocean industries, both scientific and technical, and industries supporting offshore exploration and production operations.

Implicit in these changes is a major revision to the Association's corporate objectives which are now: "the promotion and development of the Canadian shipbuilding, ship repairing, offshore and ocean industries for the advancement of the industrial, technological, economic, social, defence and sovereign interests of Canada." It is our intent to represent new members from the oceanic and offshore industries to the governments and people of Canada in the same way as we have been doing for many years for shipyards, and suppliers of marine equipment and services.

From now on, there will be only one class of full member of the CMIA, with provision being made for companies or agencies that do not qualify for membership, to be accepted as Associate Members.

Concerning corporate management, the maximum number of directors on the board will remain at 40, with the proviso that directors representing shipyards will always have a majority of at least one. This means that members from companies other than shipyards can be represented by up to 19 directors, a major increase over their current representation of four directors.

Tbis provides comprehensive and equitable capability for all member companies in the new CMIA to contribute to the formulation of policy and implementation of corporate objectives.

One of the roles of the new association will be to build upon the existing rapport with the Department of Fisheries and Oceans, and the soon-to-be-formed Department of Industry, Science and Technology, to promote programs of mutual concern.

"This expansion of the association will bring together a more comprehensive and realistic joining of the supply and demand sides of maritime industries in Canada," Mr. Clarke stated. 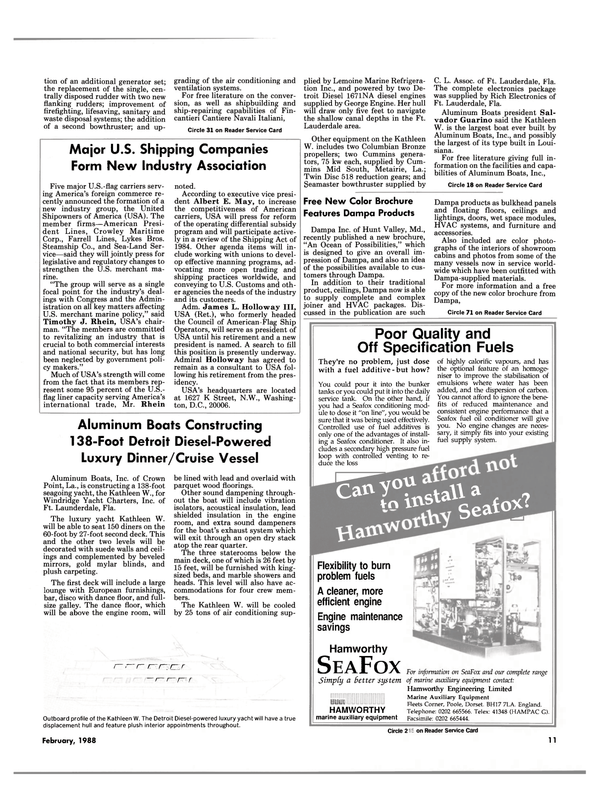