The Secretary of the Navy, James H. Webb Jr. was the guest speaker at a recent joint meeting of the Propeller Club of New York and the Port of New York Chapter of the United States Merchant Marine Academy Alumni Association held at the Roosevelt Hotel in New York City. Also in attendance was the Honorable John Gaughan, Maritime Administrator.

With more than 600 in attendance, Secretary Webb discussed the role of U.S. defense forces and how their obligations might expand after the recent signing of the INF Treaty. The secretary questioned how the Navy would meet its everwidening worldwide obligations in the face of recent budget cuts.

"We may have to examine the military utility of our force structure in an area of limited resources," he said.

"I worry that with the INF Treaty just signed," he continued, "and with renewed emphasis on conventional defenses in the NATO sector, that we may be doing ourselves a strategic disservice by putting more funds in conventional resources into Central Europe at the expense of our other interests around the world.

"This is going to be an intense debate. The future structure of the Defense Department and in particular the Navy will be at the center of that debate." The secretary also cited the re- cent report submitted by the Commission on Merchant Marine and Defense, which warns the President of a growing threat to the national security resulting from the decline of the nation's maritime industry.

Secretary Webb said that the nation's shipbuilding problems would be brought before Congress at hearings this year.

Other activities at the joint session included the presentation of t h e Port of N.Y. Chapter/- USMMAA's annual award to Capt.

Robert E. Hart, president, Marine Index Bureau. The award, which is for leadership in the maritime community and dedication to the marine industry, was presented by Peter Clark, president of the alumni association. 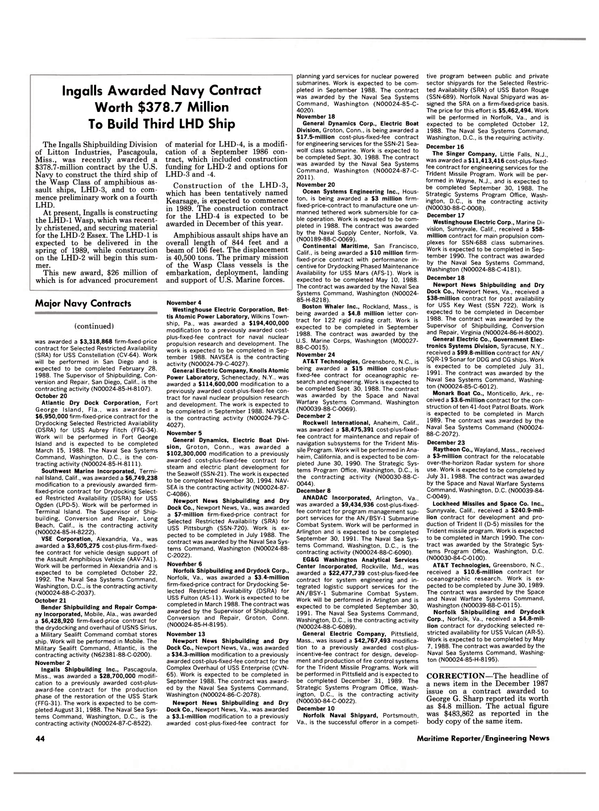