An Update On Navy Spending For Ships, Equipment And Maintenance in FY 1988 There were some nice surprises in the defense budget approved by the Congress late last December. The main surprise was the approval of full funding for two new aircraft carriers.

This action sets the scene for continued heavy spending on ships and equipment through the 1990s.

The implications of this development are enormous for suppliers of equipment and services to the new aircraft carriers as well as support vessels.

This $5 billion (46 percent) increase— in a period of growing budget pressures—shows the Navy spending for new ships continues to be accorded high priority.

A breakdown of the FY 1988 budget request for shipbuilding and the final funding approvals is shown in Exhibit 1.

Aircraft Carriers (CVN-74 and 75) In a show of strong support for naval aviation, the Congress provided full funding for two new aircraft carriers in the FY1988 continuing appropriations bill. DOD had asked for $644 million to fund long lead nuclear component purchases for these two ships starting in FY 1988. Congressional conferees in late December agreed to appropriate $6.3 billion—virtually assuring the two carriers will not be cancelled at a later date. One of the carriers is to be named the USS John C. Stennis, in recognition of the Senate Appropriations Committee chairman's continued support of Navy programs.

CVN-74 and -75 are to be completed in the mid-1990s. They will replace two Forrestal-class carriers.

Actual spending for equipment and material will be spread over the next 13 years. As shown below, projected outlays will peak between FY 1994-1996.

Newport News will obviously benefit from the program, being the only U.S. shipyard able to build aircraft carriers. Many other suppliers and manufacturers will also directly and indirectly benefit.

Aegis Ships (CG-47 and DDG-51) The Navy requested funds for two CG-47 class cruisers and three DDG-51 class destroyers in FY 1988. Citing technical problems in the DDG-51 program, the Congress refused to authorize or appropriate funds for DDG's this year. Instead, the Congress provided funds for five CG-47s. These five ships will complete the program objective of building 27 Aegis cruisers.

Litton-Ingalls and Bath Iron Works are builders of both CG-47 and DDG-51 ships.

Another action is Congressional direction that Navy open FY 1989 competition for DDG-51 contracts to other technically qualified bidders.

This will enable Avondale to compete for future orders.

Minewarfare Ships (MCM and MHC) The Navy had planned to order three MCMs in FY 1988. Citing technical and contractual difficulties in the program, the Congress refused to fund more MCMs until the problems are resolved. Navy's objective is to build 14 MCMs. Seven are on order and one has been delivered. The six remaining MCMs are to be opened to full competition.

Meanwhile, the Navy has been directed to qualify a second source for the MHC program in FY 1988.

Intermarine is the current contractor.

The original plan had been to delay second source qualification until FY 1989.

Army Tugboats The Congress refused to appropriate new funds for procuring Army tugboats in FY 1988. A report was requested from DOD assessing the alternatives for manning and operating these tugboats. Among the options is transfer of the mission to the Military Sealift Command.

Fast Sealift Initiative Navy has been directed to survey the international shipping market to determine whether used ships are available which could be purchased and converted similar to the SL-7 program. If no such ships are available, Navy is directed to begin design of a new ship capable of sustained speeds exceeding 30 knots.

Surface effect technology is among the design options to be explored.

WEAPONS & OTHER PROCUREMENT Funding for weapons and other procurement was set at a slightly lower level than requested. The Navy asked for $11.5 billion for these programs. Congress appropriated $10.8 billion. Details are shown in Exhibits 2 and 3.

Small Submersible Navy was given $15 million to purchase a small submersible in order to assess its performance as an advanced swimmer delivery system.

MK 50 Torpedo Navy asked for $222 million to buy 153 MK 50 Advanced Lightweight Torpedoes in FY 1988. There have been technical problems in this program and Congress limited procurement to 16 units. GAO has been directed to perform a cost effectiveness study of breaking out the MK- 50 afterbody. Honeywell and Westinghouse are contractors for MK 50 manufacture.

Seasheds An additional $12 million was provided by Congress in FY 1988 to procure seasheds and adapters.

Navy had asked for $52 million for this program. Congress appropriated $64 million.

Advanced Submarine Development The Defense Advanced Research Projects Agency (DARPA) was given $113 million in FY 1988 for advanced submarine research and development. These funds are to be used to look beyond the SSN 21 attack submarine now in final design.

The goal is to identify design options not now feasible by incorpo- rating technologies such as boundary layer control, advanced material, automated control systems, high temperature superconductors and quiet propulsors. Underlying this program are doubts about the ability of the SSN 21 to satisfy long term attack submarine mission requirements.

SHIP REPAIR & MAINTENANCE The Navy plans to spend $4.4 bil- lion for ship maintenance and repair in FY 1988. This is about $600 million under Navy's request. It is also significantly lower than actual spending on ship repair and maintenance in FY 1987. Details for the FY 1988 program are shown in Exhibit 5.

Depot Maintenance The appropriations conferees agreed to cut $285 from requested depot maintenance of ships in FY 1988. Among the actions were cutting "unncessary voyage repairs" by $21.7 million and reducing planned inactive ship upgrades by $18.0 million.

FF-1052 Upgrades Congress has directed Navy to review initiating a program to modernize Knox class frigates. There are 46 ships in this class—delivered between 1969-1974. More than half were built by Avondale. The primary objective of the proposed modernization would be to upgrade the ASW sensor and weapons suite.

New Threat Upgrade The appropriations bill requires one FY 1988 NTU overhaul to be performed in the Philadelphia Navy Shipyard. Remaining NTU over- hauls are to be opened to competition among public and qualified commercial shipyards.

Short term is defined as work requiring six months or less to complete.

An exception is made for Naval Reserve Force ships homeported on the West Coast. Voyage repairs are also exempt from this bidding restriction.

IMA has just published a detailed assessment of future spending for Navy research and development.

This 200+ page report will interest all firms doing business with the Navy. It provides a detailed projection of spending by specific program, assesses policy and technical issues driving each program, identifies current competitors, provides a contract history and identifies key contacts for developing business. 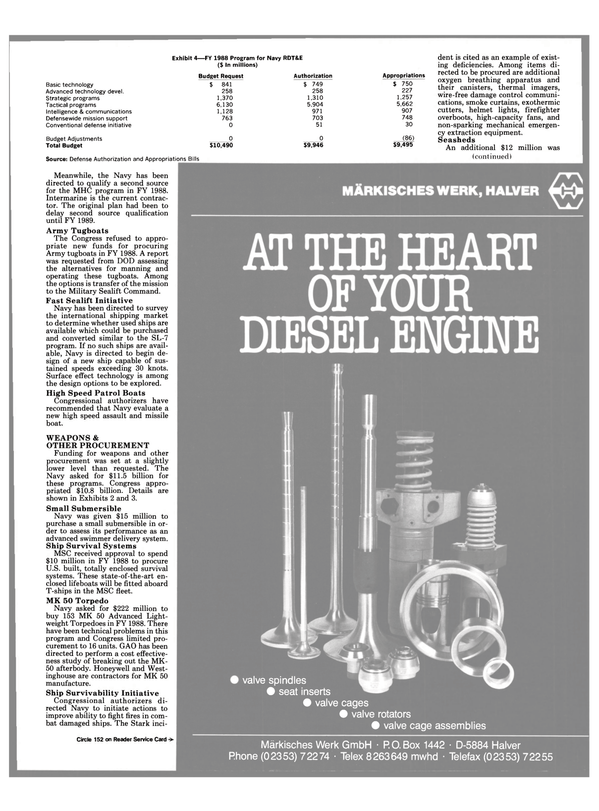