THE BARGE AND TOWING INDUSTRY: A LEGISLATIVE REVIEW

The 99th Congress was sworn into office in 1985 with perhaps its primary challenge to control the spiralling federal deficit. Members of the House of Representatives and Senate, both Democrats and Republicans, and the President, expressed their strong commitment to decrease government spending without raising taxes. This atmosphere of fiscal restraint clearly foreshadinternational owed potentially stormy seas for the domestic waterways industry.

The previous Congress (1983-84) was unable to pass legislation authorizing construction of badly needed water resources projects due to the Administration's insistence on onerous nonfederal cost-sharing requirements in exchange for project authorizations. In 1984, the House had twice overwhelmingly approved an omnibus water resources bill, at the same time it rejected additional waterway user taxes for the domestic barge and towing industry, inland and coastal.

However, the Senate version, which would have placed a much greater user tax burden on the industry, was blocked from floor consideration. A final attempt to authorize projects in a wrap-up appropriations bill was, as stated above, thwarted by the Administration over-cost sharing requirements.

Given the Administration's seemingly inflexible position on user fees, combined with the emphasis on reducing the federal deficit, it appeared unlikely that a water resources authorization bill would stand much of a chance in the 99th Congress. Through AWO, the barge and towing industry reluctantly told Congress that it would oppose the authorization of new projects be cause the industry's continuing economic plight made it impossible to accept new (for coastal operators) and/or additional (for inland operators) user taxes.

Mr. Hatfield, again, was attempting to authorize projects on an appropriations bill; Mr. Stockman and the Administration were tired of tying up funding for the military and foreign aid because of water projects. Mr. Stockman and the Senators, June 20 and 21, finally came to terms; in exchange for project authorizations, the inland waterway fuel tax would increase, over 10 years, by 10 cents per gallon, in effect doubling the current tax to a total of 20 cents per gallon, with 50 percent of construction costs payable from the Inland Waterways Trust Fund. Coastal waterway operators would be required to aid in the financing of port improvement projects, regardless of project depth, with waterway shippers paying a tax on cargo value to assist in funding 40 percent of port operation and maintenance costs.

As the negotiations entered their final stage, AWO was asked to join in the fashioning of the agreement.

As originally developed by Mr.

Stockman and negotiators, the inland user tax increase would have taken effect January 1, 1986; as a result of AWO's efforts, the tax increase was pushed back to January 1, 1988. AWO was unable to modify the cargo value tax, but was effective, during the proposal's journey through the Congressional committee process, in insulating water carriers from payment of this tax.

While imperfect from the standpoint of all parties, this proposal will break the long stalemate over waterway funding which has prevented the enactment of a comprehensive water resources development bill since 1970. It will bring new revenue into the Treasury, and resolve the issue of inland user taxes for a number of years. Nevertheless, there still remains a great deal of uncertainty for coastal operators.

While the Senate bill, S. 1567, contains additional waterway user taxes for the barge and towing industry, the House-passed measure, H.R. 6, does not: the inland waterway fuel tax would be retained at its current level (10 cents per gallon); coastal carriers would be protected from paying user fees for projects which they do not presently need for their operations. S. 1567 must still be considered on the Senate floor before a House-Senate conference can take place.

As a part of its overall deficit reduction package in 1985, the House and Senate directed the House Merchant Marine and Fish eries Committee and the Senate Commerce, Science and Transportation Committee to develop legislation establishing $100 million in annual Coast Guard user fees for fiscal years 1986, 1987 and 1988. AWO mounted a major lobbying attack to fight these new fees, including the formation of a 50-member maritime industry/labor coalition.

In late September 1985, the committees mentioned above met to formulate their deficit reduction proposals, as required by the budget resolution. Both committees rejected Coast Guard user fees, and developed alternate methods meeting the $100 million annual revenue reduction target. While we were successful in defeating generic Coast Guard user fees in 1985, the issue will surely reemerge in 1986.

In 1982, the U.S. ratified the International Convention of Measurement of Ships; in 1985, the House Merchant Marine and Fisheries Committee and the Coast Guard developed legislation to implement this Convention. As originally introduced, the implementing legislation, H.R. 1362, would have required remeasurement of domestic vessels under the new international system. This would prove particularly onerous for operators of coastal and oceangoing tugs—tonnage would drastically increase, thereby subjecting the vessel to a plethora of new requirements from which it had previously been exempt.

Problems with the bill centered around the impact on vessels in the domestic trade. While the original Subcommittee amendments contained a "grandfather" clause allowing existing vessels to continue use of domestic tonnage measurement, new vessels and new laws, as well as vessels traveling to U.S. territories and possessions would have utilized the new international system.

To resolve these problems, our association held a series of meetings with Congressional and Coast Guard officials to further refine H.R. 1362. AWO achieved many protections for the barge and towing industry, including industry participation in a Coast Guard study on the impact of converting to the international tonnage system, to be completed in 1992. The legislation passed the House in December 1985, and will be taken up by the Senate Commerce, Science, and Transportation Committee in 1986.

At the close of the 98th Congress, AWO was successful in amending the Loadline Act of 1935 to exempt from loadline requirements nonhazardous dry cargo barges operating on Lake Michigan. The legislation discussed above, H.R. 1362, would, in addition to implementing the International Tonnage Convention, consolidate various loadline statutes and, as introduced, could have jeopardized the exemption for the Lake Michigan barges. AWO asked the House Coast Guard and Navigation Subcommittee to insure that this exemption was retained; the language passed by the House of Representatives allows the Secretary of Transportation to grant exemptions where good cause exists.

In 1984 and 1985 AWO commented on draft legislation formulated by the staff of the House Merchant Marine and Fisheries Committee which would significantly rewrite maritime personal injury laws.

A fourth version was formally introduced as a bill, H.R. 3156, by Rep.

Walter B. Jones (D-NC), committee chairman. Chapter 311 of H.R. 3156 deals with shipowners liability for personal injury and death, and cargo. Limitation, which would not include hospitalization and medical expenses, would be on a per crew member basis.

Mario Biaggi (D-NY), at the request of the Maritime Law Association.

Mr. Biaggi, chairman of the Merchant Marine Subcommittee, held two days of hearings on both his bill and Chapter 311 of H.R.

We believe the limitation provisions of H.R. 277, all inclusive and based on tonnage, would better provide for stability and consistency than the status quo in allowing vessel owners to limit their liability for maritime claims.

Concerning the Jones Act, in late 1985, the Senate passed H.R. 2466, which includes a provision to close a Jones Act loophole which could enable foreign-flag tugs to provide ship assist service to foreign-flag vessels in U.S. ports. While foreign tug companies had not in the past taken advantage of this loophole, recent interest has developed on the West Coast, making timing critical for passage of this legislation.

Legislation has again been proposed to allow re-flagging of foreignbuilt, foreign-flag passenger vessels.

Introduced by Senate Merchant Marine Subcommittee chairman Ted Stevens (R-AK), S. 1935 would allow up to five passenger ships to be re-flagged as U.S. vessels and operate in the coastwise trade.

The bill places certain conditions on applicable vessels, which the Cu- nard Countess and Cunard Princess would meet. In the 98th Congress, attempts to re-flag these two vessels were unsuccessful, and AWO continues to oppose allowing foreignflag passenger vessels into the U.S.

Our organization will continue to work to insure that reasonable liability limits and federal preemption remain in oilspill cleanup and compensation legislation; this proposal is included in the House-passed superfund reauthorization bill; it is not contained in the Senate version.

The 1986 legislative agenda—regardless of the particular issues involved— will be shaped by the Gramm-Rudman-Hollings balanced budget amendment, signed into law December 10, 1985. This controversial new law sets budget deficit targets for fiscal years 1986 through 1991, at which time it mandates a zero deficit. For the current fiscal year, $11.7 billion in federal spending cuts are required by March 1, 1986. For the barge and towing industry, cutbacks in the Corps of Engineers O&M budget can be expected.

The Coast Guard's budget will be reduced. It is entirely conceivable, to be in compliance with the Gramm-Rudman-Hollings law, that new user fees could be put into effect without the expenditure of any federal funds for new projects.

Needless to say, 1986 will be an interesting and challenging year. 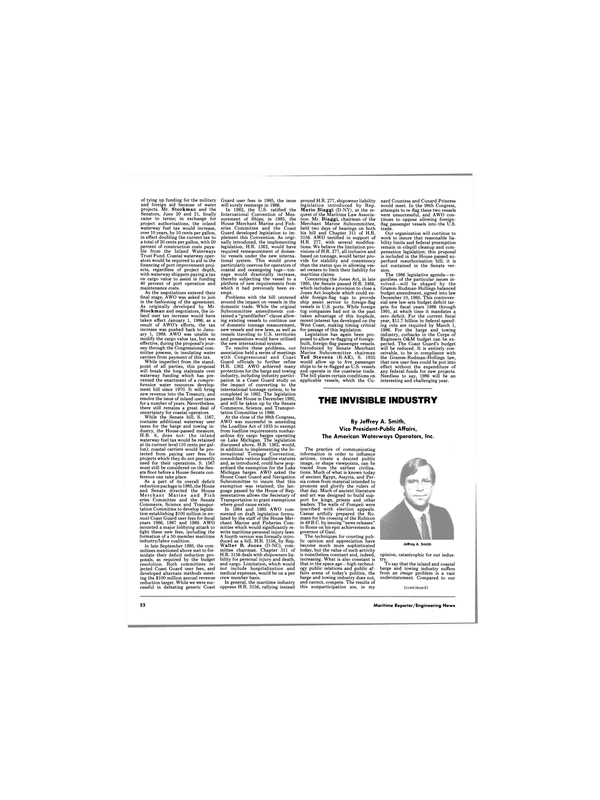 Read THE BARGE AND TOWING INDUSTRY: A LEGISLATIVE REVIEW in Pdf, Flash or Html5 edition of March 1986 Maritime Reporter

Other stories from March 1986 issue