The Rowan Gorilla III departed from Belle Chasse, La., recently bound for the east coast of Canada where the drilling rig will operate under contract to Mobil Oil Canada, Ltd. offshore Sable Island, Nova Scotia. The new unit is the third in a series of the largest self-elevating jackup rigs built to date by Marathon LeTourneau Offshore Company for Rowan Companies, Inc. of Houston. The first unit has been working successfully offshore Sable Island for the past year under contract to a Husky/Bow Valley joint venture, while the second recently arrived in the North Sea.

The Gorilla rigs are of a new and heavier class intended to drill up to 30,000 feet in water depths up to 328 feet in any ice-free hostile environment in the world. In less hostile environments, they are capable of drilling in water depths of more than 400 feet. These 15,000-ton units require twice the amount of fabricated steel used in the previously largest jackups. At 297 feet long by 292 feet wide, Gorilla Class rigs are nearly 40 percent larger than the Marathon LeTourneau 116 Class jackups.

Construction of the Rowan Gorilla III was completed at Marathon's Vicksburg, Miss., shipyard, with materials purchased by both the builder and the owner from manufacturers located in 33 states throughout the U.S. For example, the rig stands on structural steel plate and tubular parts made in Ohio, New York, Wisconsin, Massachusetts, Pennsylvania, Florida, Illinois, and Texas, all purchased by the shipyard. Owner-furnished equipment that Rowan purchased to perform the drilling functions was manufactured in many of these same states, plus others.

When Gorilla III left Belle Chasse it was towed by the Smit London, a 22,000-bhp oceangoing tug owned by Smit Tak International Towage and Salvage Company of Rotterdam.

The journey took approximately 20 days, and brought the rig from the Gulf of Mexico around the Florida peninsula and up the U.S.

and Canadian east coast to Nova Scotia. During the voyage the tug received propulsion assistance from the operation of the Gorilla Ill's twin 112-inch propellers in Kort nozzles driven by eight electric motors with 6,800 hp total output.

The Gorilla III is the 23rd rig in Rowan's offshore fleet. During its 60 years of experience in the contract drilling business, the Houston company has drilled more than 7,000 oil and gas wells throughout the world. 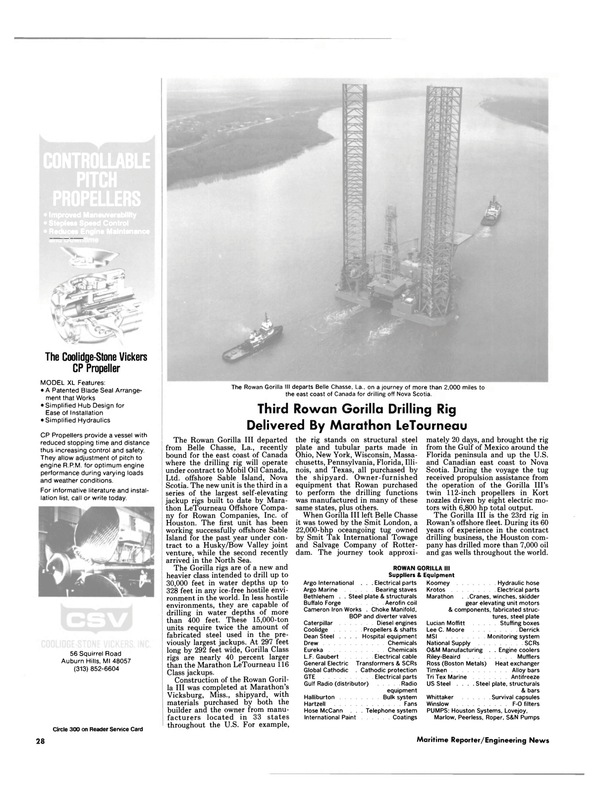