At a recent luncheon meeting of The Society of Marine Consultants held at the Whitehall Club in New York, a large turnout of members and guests heard a presentation on the transportation of oil from the arctic. The speaker was Virgil Rinehart, director of the Office of Advanced Ship Development and Technology, U.S. Maritime Administration.

Concentrating on the carriage of crude oil from the arctic to the continental U.S., he reviewed the historic voyages of the tanker Manhattan through the Northwest Passage in the early 1970s, and the subsequent development of the Trans- Alaska pipeline linking the North Slope with the port of Valdez on the South Coast.

Based on industry estimates of large volumes of as yet undiscovered oil in the region and the maximum capacity of the pipeline, Mr. Rinehart foresees additional utilization of tankers in the trade, not from the pipeline's southern terminal at Valdez but directly from the producing fields in the Arctic.

Touching on the subject of the possible export of Alaskan oil to Japan, he personally doubts that it will occur, as the inevitable result would be the loss of American tonnage and jobs. However, he said that the maritime industry would be unwise to rely entirely on government regulation to protect its interest in the Alaskan oil trade.

Capt. Arthur Smith, who commanded the Manhattan on the Northwest Passage voyages, pointed out that tanker transportation directly from the oil fields was feasible, and that the decision to build the pipeline was made on political not economic considerations.

In addition to the many members and guests from the New York area, Society members in attendance included Capt. C.P.S. Bhalla from New Delhi, India, and Capt. Gerd Blunck from West Germany. 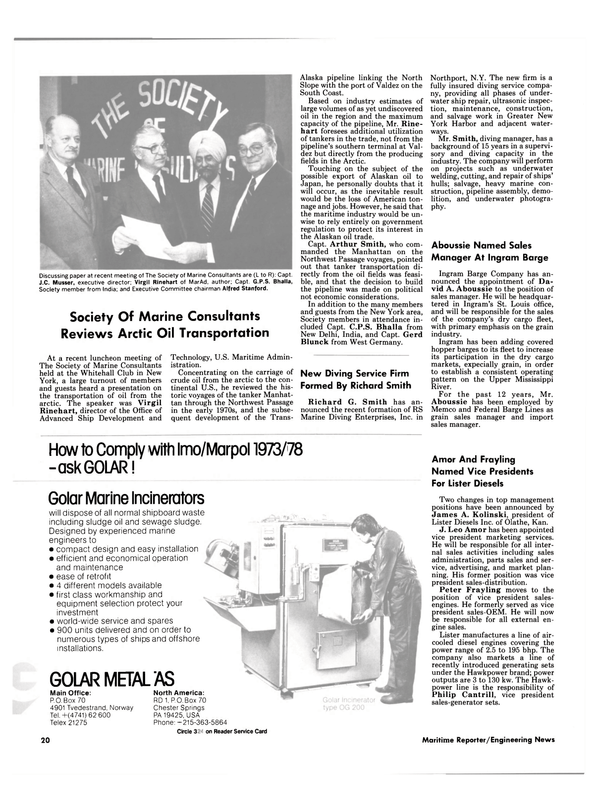