Ciserve is the travel arm of Sweden's Gothenberg-based shipyard that specializes in providing highly skilled labor to vessels at any port or while at sea.

Based in Norfolk, Va., at the NORSHIPCO shipyard, the service began with several diesel engine repairs and the complete overhaul of the main engines on the passenger ship Daphne.

During the reception, Cityvarvet's vice president Bengt Fink described the condition of the ship repair industry and dispelled some of the misconceptions about Sweden's climate and accessibility due to its geographic position. Mr. Fink explained that the yard's reputation for efficiency is well known to Europeans, making them frequent callers at the facility. Cityvarvet is now actively contacting the United States maritime fraternity to better acquaint them with their ship repair capabilities.

Cityvarvet dropped the Gotaverken name from its former title, Gotaverken Cityvarvet AB. in order to emphasize their specialization in repair only, as opposed to the newbuilding and engine manufacturing of the large Gotaverken group. Cityvarvet's facilities include nine drydocks, with the largest being the floating drydock for 240,000-deadweight-ton vessels, and the mammoth graving dock that will handle up to 400.000- dwt vessels.

For additional information and brochures on both the Cityvarvet AB and Ciserve AB ship repairing facilities, Circle 92 on Reader Service Card 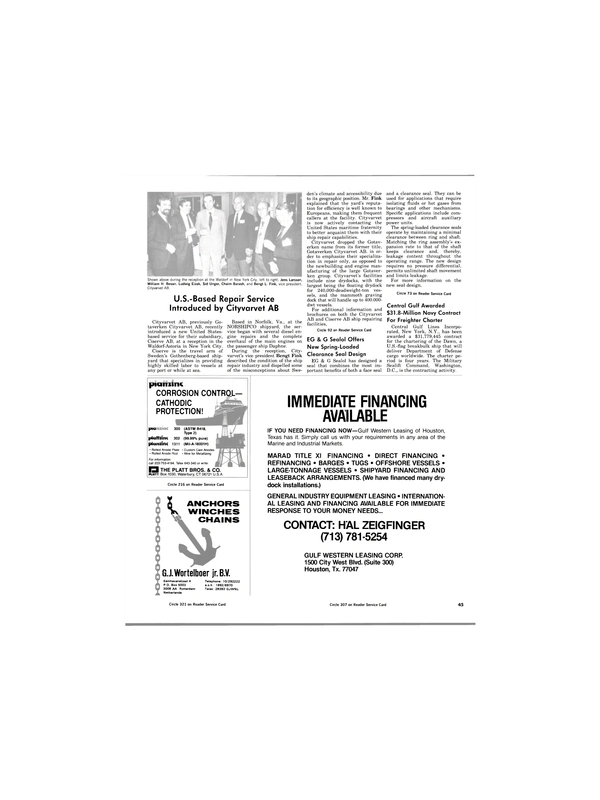