The U.S. Navy has awarded Ingalls Shipbuilding division of Litton Industries an $822,042,026 increase to a previously awarded $140.9-million contract that will allow the shipyard to begin detail design and construction of the lead ship of a new class of multipurpose amphibious assault ships, the LHD-1.

This latest award converts a previously awarded cost-plus-fixed-fee contract for the procurement of long-lead-time materials and related engineering work on the new ship to a fixed-price, incentive contract.

The LHD-1 will be 844 feet long with a beam of 106 feet, and will displace approximately 40,500 tons. Powered by two steam propulsion plants developing a combined 70,000 shp, the ship will be capable of speeds in excess of 20 knots. Its primary mission will be embarking, deploying, and supporting elements of a Marine Corps landing force.

The new class is designed to accommodate the Navy's new Landing Craft, Air Cushion (LCAC) and short-takeoff Harrier jet aircraft, in addition to the Navy's full range of helicopters and conventional landing craft. The ship's command and control arrangement, which will include a full range of electronic sensors, communications systems, and radar equipment, will allow the ship to serve a secondary mission as a command ship during amphibious operations. She will also be capable of controlling combat operations for other ships and aircraft.

"While it will not immediately increase our work force, LHD-1 will be a major factor in future employment levels," Mr. Erb said.

Currently employing a work force of about 10,000, the shipyard expects to experience an employment dip this spring, but will begin increasing increasing later this year. As a result of the LHD-1 contract and activity at the yard in the construction of the CG-47 Class Aegis guidedmissile cruisers, employment is expected to increase to 13,000 in late 1986. During peak construction periods, as many as 2,500 Ingalls employees will be involved in the construction of LHD-1. In addition to the lead ship, the Navy currently carries three additional LHD- 1 Class assault ships in its five-year shipbuilding program. Ingalls will begin fabrication work on LHD-1 this summer, with delivery scheduled in 1989.

The new ships are similar in design to the five Tarawa (LHA-1) Class general-purpose amphibious assault ships built by Ingalls in the 1970s.

While LHD-1 will have a similar hull, propulsion equipment, and living spaces as the LHAs now in service with the Fleet, several key characteristics of the new ship will distinguish her from an LHA. One difference will be the enclosed well deck built into the stern and opened to the sea through a huge stern gate.

This feature is specifically designed to accommodate air cushion landing craft that will "fly" into and out of the ship's dry well deck. 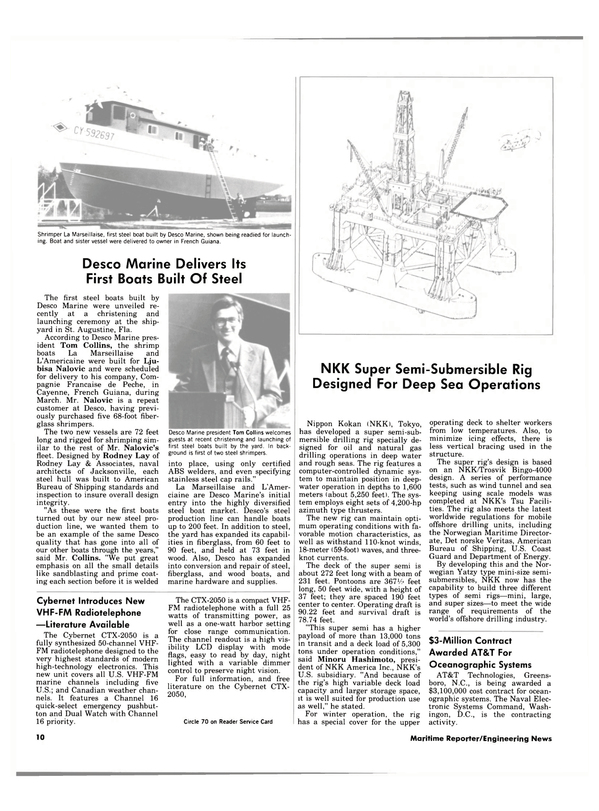