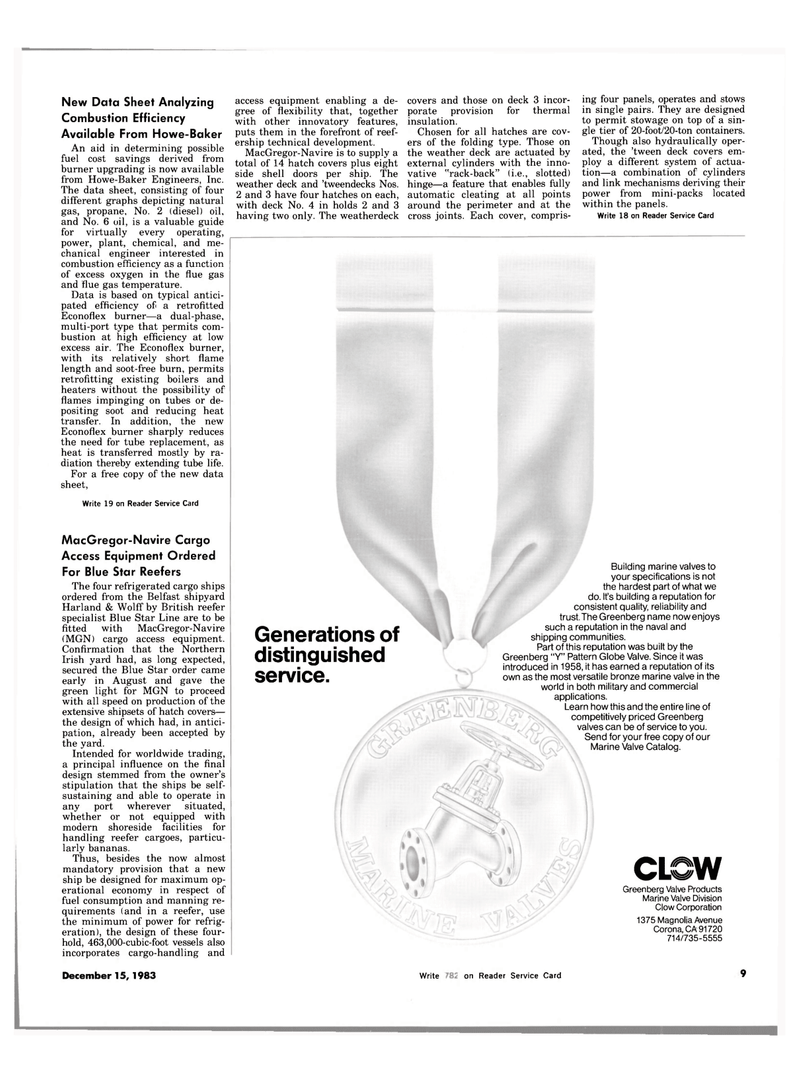 The data sheet, consisting of four different graphs depicting natural gas, propane, No. 2 (diesel) oil, and No. 6 oil, is a valuable guide for virtually every operating, power, plant, chemical, and me- chanical engineer interested in combustion efficiency as a function of excess oxygen in the flue gas and flue gas temperature.

Data is based on typical antici- pated efficiency of a retrofitted

For a free copy of the new data sheet,

The four refrigerated cargo ships ordered from the Belfast shipyard

Confirmation that the Northern

Irish yard had, as long expected, secured the Blue Star order came early in August and gave the green light for MGN to proceed with all speed on production of the extensive shipsets of hatch covers— the design of which had, in antici- pation, already been accepted by the yard.

Intended for worldwide trading, a principal influence on the final design stemmed from the owner's stipulation that the ships be self- sustaining and able to operate in any port wherever situated, whether or not equipped with modern shoreside facilities for handling reefer cargoes, particu- larly bananas.

Thus, besides the now almost mandatory provision that a new ship be designed for maximum op- erational economy in respect of fuel consumption and manning re- quirements (and in a reefer, use the minimum of power for refrig- eration), the design of these four- hold, 463,000-cubic-foot vessels also incorporates cargo-handling and access equipment enabling a de- gree of flexibility that, together with other innovatory features, puts them in the forefront of reef- ership technical development.

MacGregor-Navire is to supply a total of 14 hatch covers plus eight side shell doors per ship. The weather deck and 'tweendecks Nos. 2 and 3 have four hatches on each, with deck No. 4 in holds 2 and 3 having two only. The weatherdeck covers and those on deck 3 incor- porate provision for thermal insulation.

Chosen for all hatches are cov- ers of the folding type. Those on the weather deck are actuated by external cylinders with the inno- vative "rack-back" (i.e., slotted) hinge—a feature that enables fully automatic cleating at all points around the perimeter and at the cross joints. Each cover, compris- ing four panels, operates and stows in single pairs. They are designed to permit stowage on top of a sin- gle tier of 20-foot/20-ton containers.

Though also hydraulically oper- ated, the 'tween deck covers em- ploy a different system of actua- tion—a combination of cylinders and link mechanisms deriving their power from mini-packs located within the panels.

Building marine valves to your specifications is not the hardest part of what we do. It's building a reputation for consistent quality, reliability and trust. The Greenberg name now enjoys such a reputation in the naval and shipping communities.

Part of this reputation was built by the

Greenberg "Y" Pattern Globe Valve. Since it was introduced in 1958, it has earned a reputation of its own as the most versatile bronze marine valve in the world in both military and commercial applications.

Learn how this and the entire line of competitively priced Greenberg valves can be of service to you.

Send for your free copy of our