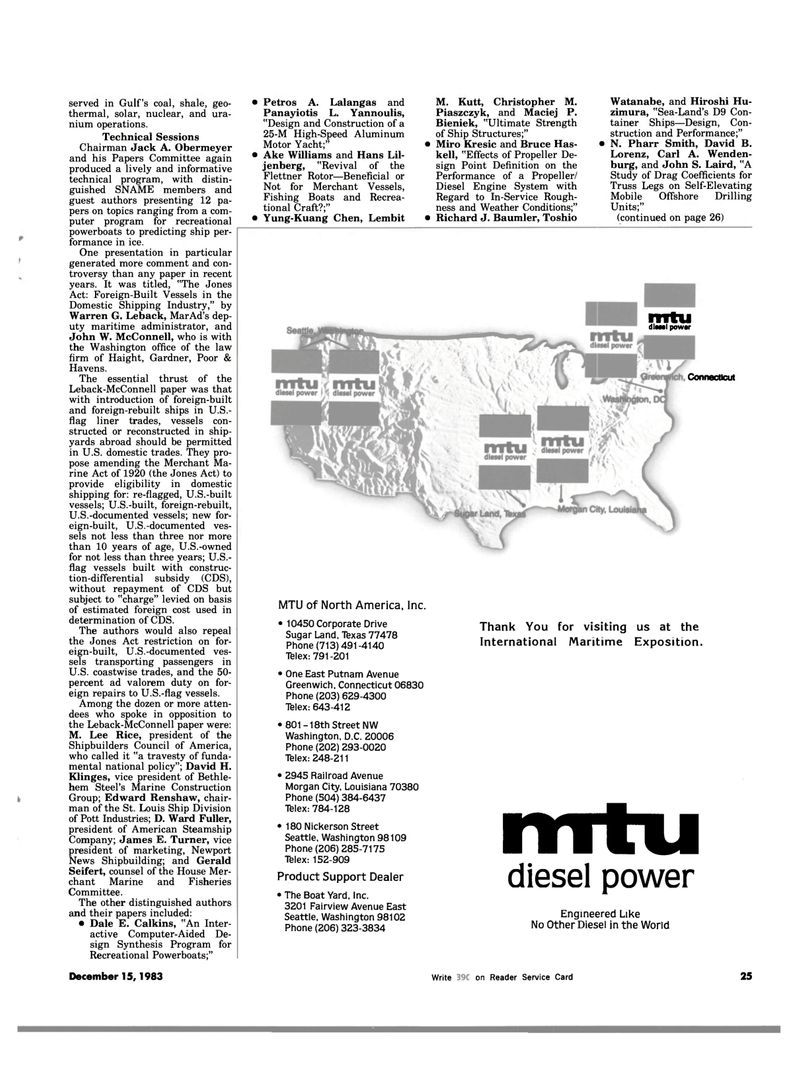 Chairman Jack A. Obermeyer and his Papers Committee again produced a lively and informative technical program, with distin- guished SNAME members and guest authors presenting 12 pa- pers on topics ranging from a com- puter program for recreational powerboats to predicting ship per- formance in ice.

One presentation in particular generated more comment and con- troversy than any paper in recent years. It was titled, "The Jones

Act: Foreign-Built Vessels in the

John W. McConnell, who is with the Washington office of the law firm of Haight, Gardner, Poor &

The essential thrust of the

Leback-McConnell paper was that with introduction of foreign-built and foreign-rebuilt ships in U.S.- flag liner trades, vessels con- structed or reconstructed in ship- yards abroad should be permitted in U.S. domestic trades. They pro- pose amending the Merchant Ma- rine Act of 1920 (the Jones Act) to provide eligibility in domestic shipping for: re-flagged, U.S.-built vessels; U.S.-built, foreign-rebuilt,

The authors would also repeal the Jones Act restriction on for- eign-built, U.S.-documented ves- sels transporting passengers in

U.S. coastwise trades, and the 50- percent ad valorem duty on for- eign repairs to U.S.-flag vessels.

Among the dozen or more atten- dees who spoke in opposition to the Leback-McConnell paper were:

M. Lee Rice, president of the

Shipbuilders Council of America, who called it "a travesty of funda- mental national policy"; David H.

Seifert, counsel of the House Mer- chant Marine and Fisheries

The other distinguished authors and their papers included: • Dale E. Calkins, "An Inter- active Computer-Aided De- sign Synthesis Program for

Recreational Powerboats;" • Petros A. Lalangas and

Not for Merchant Vessels,

Performance of a Propeller/

Study of Drag Coefficients for

MTU of North America, Inc. • 10450 Corporate Drive Thank You for visiting us at the