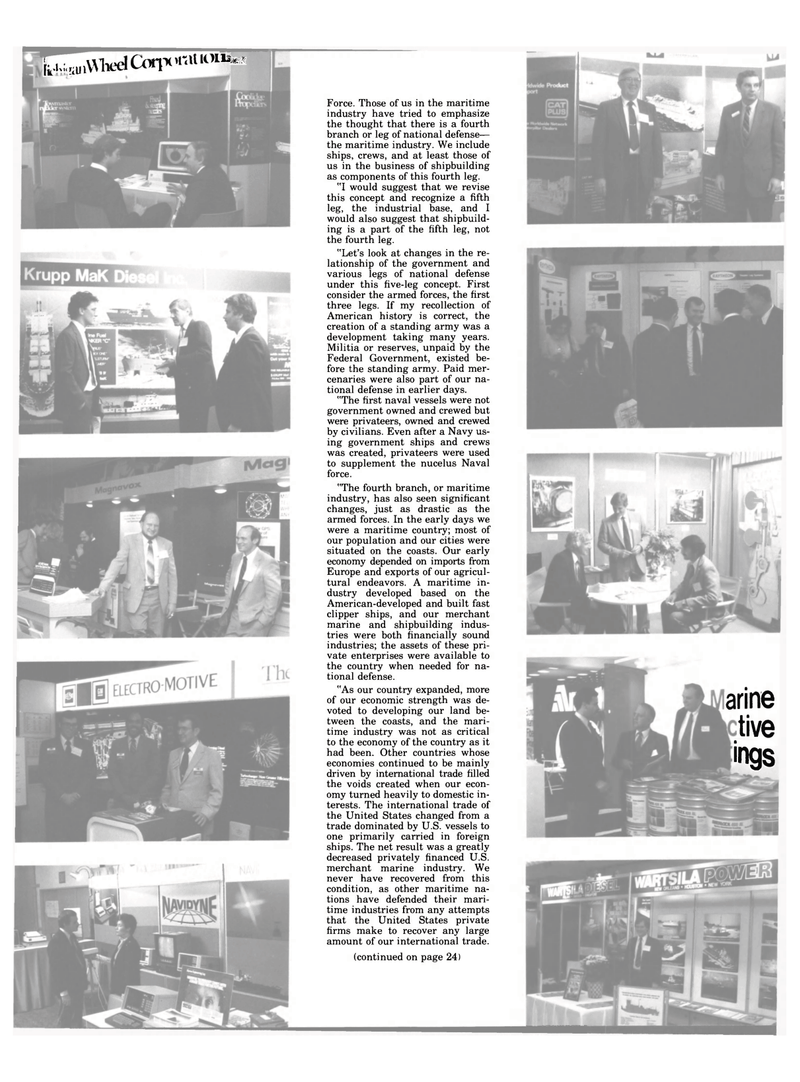 Force. Those of us in the maritime industry have tried to emphasize the thought that there is a fourth branch or leg of national defense— the maritime industry. We include ships, crews, and at least those of us in the business of shipbuilding as components of this fourth leg. "I would suggest that we revise this concept and recognize a fifth leg, the industrial base, and I would also suggest that shipbuild- ing is a part of the fifth leg, not the fourth leg. "Let's look at changes in the re- lationship of the government and various legs of national defense under this five-leg concept. First consider the armed forces, the first three legs. If my recollection of

American history is correct, the creation of a standing army was a development taking many years.

Militia or reserves, unpaid by the

Federal Government, existed be- fore the standing army. Paid mer- cenaries were also part of our na- tional defense in earlier days. "The first naval vessels were not government owned and crewed but were privateers, owned and crewed by civilians. Even after a Navy us- ing government ships and crews was created, privateers were used to supplement the nucelus Naval force. "The fourth branch, or maritime industry, has also seen significant changes, just as drastic as the armed forces. In the early days we were a maritime country; most of our population and our cities were situated on the coasts. Our early economy depended on imports from

Europe and exports of our agricul- tural endeavors. A maritime in- dustry developed based on the

American-developed and built fast clipper ships, and our merchant marine and shipbuilding indus- tries were both financially sound industries; the assets of these pri- vate enterprises were available to the country when needed for na- tional defense. "As our country expanded, more of our economic strength was de- voted to developing our land be- tween the coasts, and the mari- time industry was not as critical to the economy of the country as it had been. Other countries whose economies continued to be mainly driven by international trade filled the voids created when our econ- omy turned heavily to domestic in- terests. The international trade of the United States changed from a trade dominated by U.S. vessels to one primarily carried in foreign ships. The net result was a greatly decreased privately financed U.S. merchant marine industry. We never have recovered from this condition, as other maritime na- tions have defended their mari- time industries from any attempts that the United States private firms make to recover any large amount of our international trade. (continued on page 24) arine tive ings