Citing a "growing sense of frustration" in the lack of a unified approach to the revitalization of America's maritime industry, Rep.

Mario Biaggi of New York has urged the personal intervention of AFL-CIO president Lane Kirkland to provide the leadership in this area.

The Congressman made his remarks at the New York Hilton where he was awarded one of the maritime industry's most prestigious honors, the Admiral of the Ocean Sea (AOTOS) Award, presented on behalf of maritime labor and industry by United Seamen's Service. The award is given for distinguished service to the maritime sector.

Speaking before some 600 industry leaders, Mr. Biaggi, who is chairman of the House Merchant Marine Subcommittee, said he made the appeal in a letter dispatched earlier to Mr. Kirkland, who was the 1982 recipient of the AOTOS Award and who is a Master Mariner and member of the International Organization of Masters, Mates & Pilots, AFL-CIO.

A native of New York, Mr.

Biaggi was elected to the House of Representatives in 1968 and has won re-election ever since.

In his most recent return to the House he won 91 percent of the vote. He is the 15th recipient of the AOTOS Award and the sixth government representative to be so honored. 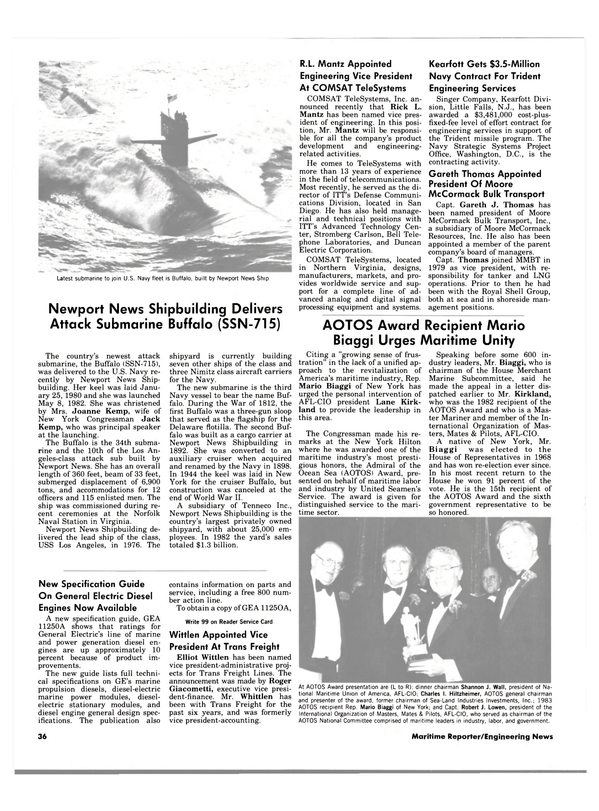