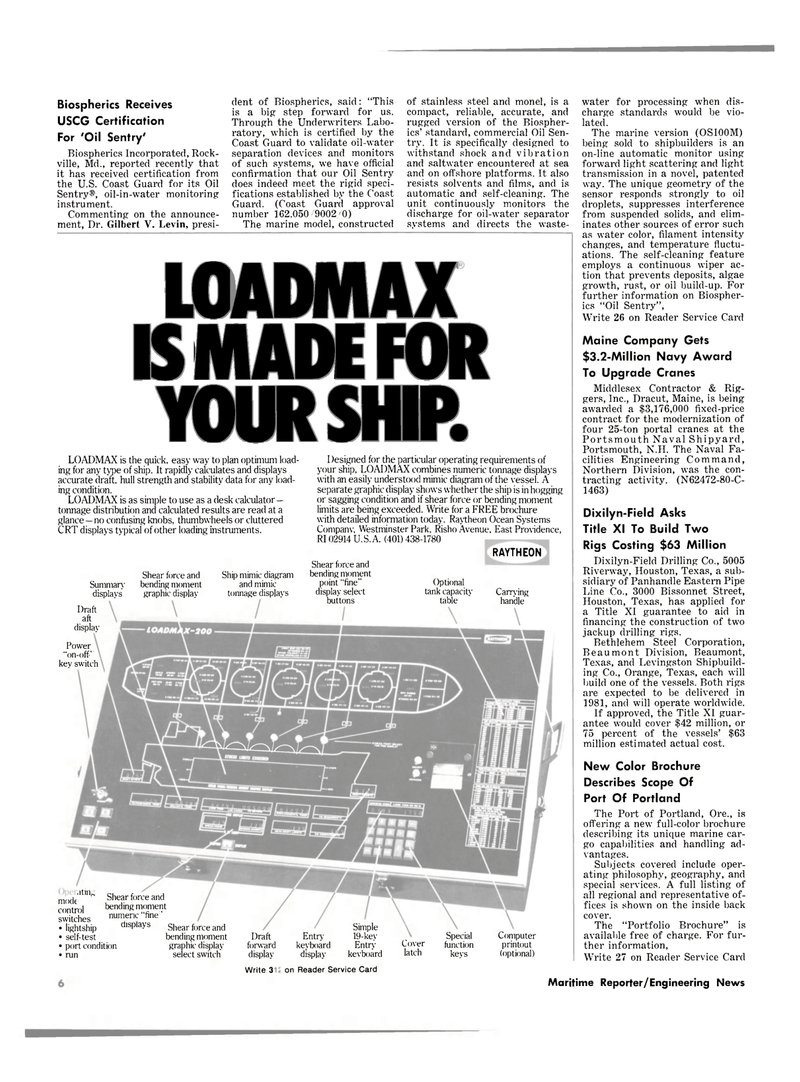 Biospherics Incorporated, Rock- ville, Md., reported recently that it has received certification from the U.S. Coast Guard for its Oil

Commenting on the announce- ment, Dr. Gilbert V. Levin, presi- dent of Biospherics, said: "This is a big step forward for us.

Through the Underwriters Labo- ratory, which is certified by the

Coast Guard to validate oil-water separation devices and monitors of such systems, we have official confirmation that our Oil Sentry does indeed meet the rigid speci- fications established by the Coast

The marine model, constructed of stainless steel and monel, is a compact, reliable, accurate, and rugged version of the Biospher- ics' standard, commercial Oil Sen- try. It is specifically designed to withstand shock and vibration and saltwater encountered at sea and on offshore platforms. It also resists solvents and films, and is automatic and self-cleaning. The unit continuously monitors the discharge for oil-water separator systems and directs the waste- water for processing when dis- charge standards would be vio- lated.

Middlesex Contractor & Rig- gers, Inc., Dracut, Maine, is being awarded a $3,176,000 fixed-price contract for the modernization of four 25-ton portal cranes at the

Houston, Texas, has applied for a Title XI guarantee to aid in financing the construction of two jackup drilling rigs.

Texas, and Levingston Shipbuild- ing Co., Orange, Texas, each will build one of the vessels. Both rigs are expected to be delivered in 1981, and will operate worldwide.

If approved, the Title XI guar- antee would cover $42 million, or 75 percent of the vessels' $63 million estimated actual cost.

Subjects covered include oper- ating philosophy, geography, and special services. A full listing of all regional and representative of- fices is shown on the inside back cover.

The "Portfolio Brochure" is available free of charge. For fur- ther information,

LOADMAX is the quick, easy way to plan optimum load- ing for any type of ship. It rapidly calculates and displays accurate draft, hull strength and stability data for any load- ing condition.

LOADMAX is as simple to use as a desk calculator— tonnage distribution and calculated results are read at a glance — no confusing knobs, thumbwheels or cluttered

Designed for the particular operating requirements of your ship, LOADMAX combines numeric tonnage displays with an easily understood mimic diagram of the vessel. A separate graphic display shows whether the ship is in hogging or sagging condition and if shear force or bending moment limits are being exceeded. Write for a FREE brochure with detailed information today. Raytheon Ocean Systems