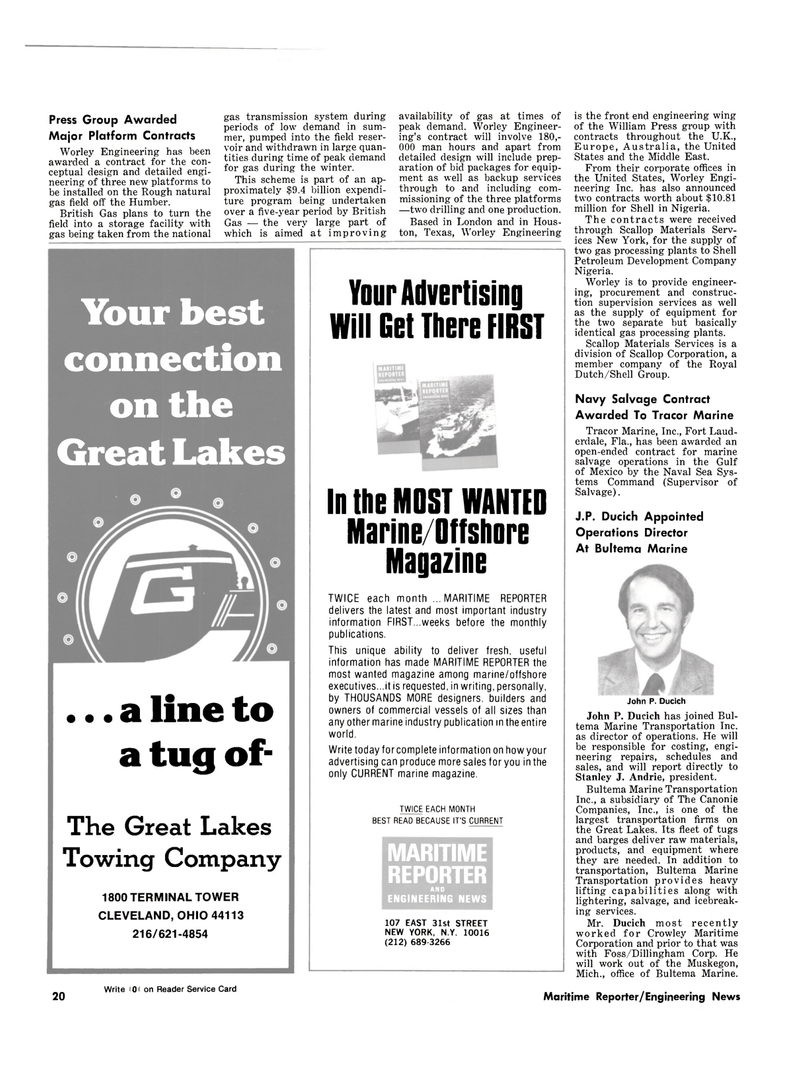 Worley Engineering has been awarded a contract for the con- ceptual design and detailed engi- neering of three new platforms to be installed on the Rough natural gas field off the Humber.

British Gas plans to turn the field into a storage facility with gas being taken from the national gas transmission system during periods of low demand in sum- mer, pumped into the field reser- voir and withdrawn in large quan- tities during time of peak demand for gas during the winter.

This scheme is part of an ap- proximately $9.4 billion expendi- ture program being undertaken over a five-year period by British

Gas — the very large part of which is aimed at improving availability of gas at times of peak demand. Worley Engineer- ing's contract will involve 180,- 000 man hours and apart from detailed design will include prep- aration of bid packages for equip- ment as well as backup services through to and including com- missioning of the three platforms —two drilling and one production.

Based in London and in Hous- ton, Texas, Worley Engineering is the front end engineering wing of the William Press group with contracts throughout the U.K.,

States and the Middle East.

From their corporate offices in the United States, Worley Engi- neering Inc. has also announced two contracts worth about $10.81 million for Shell in Nigeria.

The contracts were received through Scallop Materials Serv- ices New York, for the supply of two gas processing plants to Shell

Worley is to provide engineer- ing, procurement and construc- tion supervision services as well as the supply of equipment for the two separate but basically identical gas processing plants.

Scallop Materials Services is a division of Scallop Corporation, a member company of the Royal

Tracor Marine, Inc., Fort Laud- erdale, Fla., has been awarded an open-ended contract for marine salvage operations in the Gulf of Mexico by the Naval Sea Sys- tems Command (Supervisor of

John P. Ducich has joined Bul- tema Marine Transportation Inc. as director of operations. He will be responsible for costing, engi- neering repairs, schedules and sales, and will report directly to

Inc., a subsidiary of The Canonie

Companies, Inc., is one of the largest transportation firms on the Great Lakes. Its fleet of tugs and barges deliver raw materials, products, and equipment where they are needed. In addition to transportation, Bultema Marine

Corporation and prior to that was with Foss/Dillingham Corp. He will work out of the Muskegon,

Your best connection on the

Will Get There FIRST

In the MOST WANTED Marine/Offshore

TWICE each month ... MARITIME REPORTER delivers the latest and most important industry information FIRST...weeks before the monthly publications.

This unique ability to deliver fresh, useful information has made MARITIME REPORTER the most wanted magazine among marine/offshore executives...it is requested, in writing, personally, by THOUSANDS MORE designers, builders and owners of commercial vessels of all sizes than any other marine industry publication in the entire world.

Write today for complete information on how your advertising can produce moresalesforyou in the only CURRENT marine magazine.

BEST READ BECAUSE IT'S CURRENT